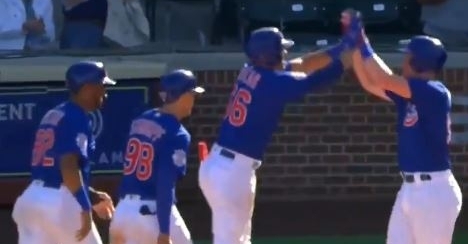 It's spring training but still exciting to fly the W especially in dramatic fashion.

Cubs outfielder Rafael Ortega hit a walk-off grand slam to give the Cubs an 9-8 win against the A's on Tuesday.

"Way back, BALLGAME!, Cubs announcer Jon Sciambi said excitingly after watching the homer land over the wall in right field.

The crowd of around 3,000 fans went wild, and Ortega was pumped up, helping his team win.

This will be a memorable moment for Ortega, and I am very happy for him as he is one of the lesser-known players battling day in and day out for a roster spot.