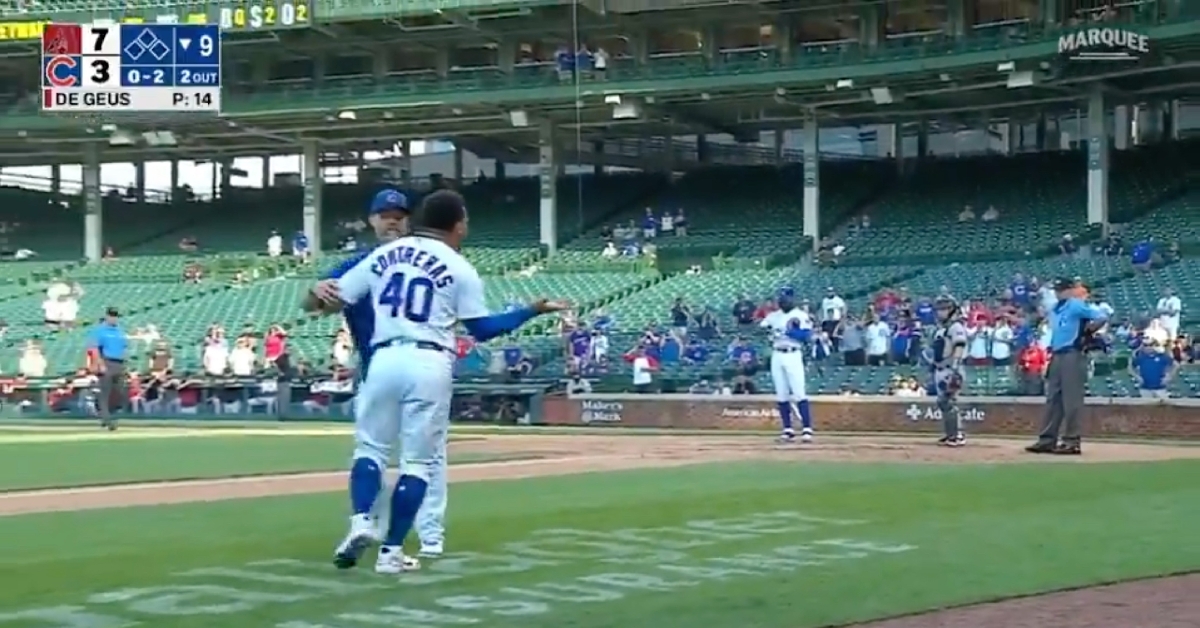 Willson Contreras charged onto the field in order to confront Pat Hoberg and was restrained by David Ross.

CHICAGO — The ending to the Chicago Cubs' 7-3 loss to the Arizona Diamondbacks on Saturday was unique, to say the least. With the Cubs trailing 7-2 midway through the ninth inning and on the verge of losing, a storm rolled in at Wrigley Field, causing a 99-minute weather delay. Following the ninth-inning rain delay, Cubs catcher Willson Contreras added to the uniqueness by managing to get himself ejected with two outs in the bottom of the ninth.

With the Cubs trailing 7-3 and down to their last out, right fielder Jason Heyward was at the plate with nobody on base when a called strike placed Heyward into an 0-2 hole and irked Contreras. Perhaps home plate umpire Pat Hoberg's patience had run thin due to a lengthy weather delay dragging out a game that was all but decided because it did not take much for Hoberg to throw Contreras out.

Evidently, Contreras, who flied out to the warning track earlier in the inning, was unhappy with Hoberg's strike zone and let the umpire hear about it from the dugout after back-to-back called strikes in Heyward's at-bat. Contreras did not go quietly after being tossed, though, as he stormed onto the field in order to confront Hoberg, causing manager David Ross to have to hold him back.

Contreras barked at Hoberg while being restrained by Ross, and the skipper never allowed his star backstop to get up close and personal with Hoberg. Heyward hit a single on the very next pitch, but the Cubs' 7-3 defeat was in the books soon after that. In his four plate appearances on the day, Contreras was hit by a pitch and went 1-for-3 with a solo home run, a groundout and the aforementioned flyout.