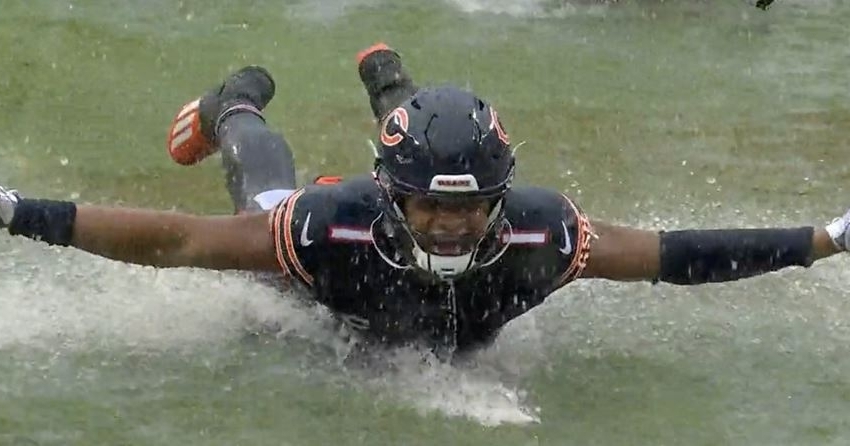 There was some good and bad on Sunday as the Bears won their season opener over San Francisco. The Bears are now 1-0 after upsetting the 49ers, 19-10 in Chicago.

So let’s take a look and give out some grades based on the performances by position:

Justin Fields has had better games in his career, completing only 8-of-17 passes on Sunday, but he made some crucial scrambles to deliver a pair of massive touchdown passes to give the Bears the win. Fields threw an interception but recovered with a very strong second half that he hopes will carry over to week 2. Fields also added over 20 yards on the ground as well.

David Montgomery finished the day with 17 carries for just 26 yards and three catches for 24 yards. Khalil Herbert was solid. He spelled Montgomery with nine carries for 45 yards and a touchdown. Bears will hope to keep both involved as the season continues.

The passing game was not active, mostly due to the absurdly wet field conditions. Third-year wideout Darnell Mooney caught just one pass. Dante Pettis made a 51-yard TD catch, and Equanamius St. Brown caught a touchdown as well. Byron Pringle caught one pass for 22 yards as well. The Bears certainly have some playmakers they will look to get the ball to more.

This unit certainly has talent with Cole Kmet and Ryan Griffin, but neither caught a pass in the Bears’ season opener. Keep an eye on them as the season continues.

The offensive line was solid, allowing just two sacks of quarterback Justin Fields in the sloppy Soldier Field conditions against the potent 49ers Defense. This unit struggled a bit in the run-blocking area, but expect that to improve on a dry surface.

The defensive line was okay. They were solid in the run game and were able to get to quarterback Trey Lance. Dominique Robinson was phenomenal, with 1.5 sacks to pace the unit.

Roquan Smith had nine tackles and was everywhere for the Bears. The rest of the unit was involved — with Robert Quinn a bit quiet off the edge.

This unit was good on Sunday. Eddie Jackson had an interception, Jaquan Brisker’s debut saw him flying around the field, and Jaylon Johnson kept Deebo Samuel quiet in the receiving game and forced a fumble as well.

Kicker Cairo Santos made an extra point. Everything about this unit is hard to evaluate when the conditions were as difficult as they were on Sunday.

The play calling was much improved in Matt Eberflus first career game with the Bears. While the Bears struggled to get anything going early, some halftime adjustments were the difference between an L and W in the column.

Nonetheless, week 1 is in the books, and the Bears open the season 1-0, with a Sunday Night Football date with Green Bay on the docket. A New era of Bears football is upon us.