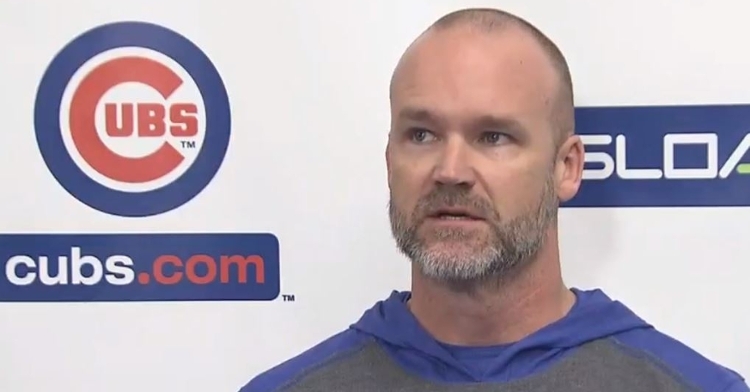 Davis Ross: Sharply turning away from Joe Maddon’s style, David Ross said something yesterday that was like music to the ears of fans, and presumably players: "Traditionally, I like a standard lineup as much as I possibly can. I think the flow of a normal, consistent lineup is important to some of the players. It's a real thing, as much as we don't measure it."

Ben Zobrist: Sad, but not surprising, Ben Zobrist says that he does not plan on playing in the 2020 season. While no definitive announcement has been made, it’s highly likely that Zo plans on hanging up the cleats. If so, thanks for the memories, Ben.

Jon Morosi: Good news and bad news for Kris Bryant fans. MLB’s Jon Morosi clears up some of what’s going on with the Cubs, Kris Bryant, and his status and a potential landing spot.

.@jonmorosi expects the #Cubs to continue to listen to offers for Kris Bryant through Spring Training. pic.twitter.com/EkUuFS5De7

What to do about Q...@thekapman is joined by @DavidHaugh to discuss that, the #Cubs' offseason, Kris Bryant and much more.

Cole Hamels: Cubs’ fans were divided on whether or not the team should have retained Cole Hamels when he hit free agency this winter.

Personally, I was leery of his age and the oblique injury that caused him to spiral last summer. News from Atlanta on Wednesday reported that Hamels is injured already- and the Braves pitchers and catchers were due to report yesterday.

Cole Hamels irritated pitching shoulder doing weighted-ball exercises, #Braves’ Snitker said. Hamels is in Dallas, will be re-evaluated in 3 weeks. Hope is that it’s nothing serious and he’ll have time to get ready.

Marquee Sports Network: Marquee has announced that they’ve added former Cub Mark Grace and Elise Menaker, who will be coming over from BTN (Big Ten Network). Now, if we only knew how to access the damn thing.

However, there should be an announcement soon of more streaming options, according to ESPN's Jesse Rogers.

Baseball Quotes: “I calmly and politely let the umpire know I thought he was wrong.” -George Brett, jokingly, on the pine tar incident

Players are beginning to report to Spring Training! ????

Catch up on yesterday's key hot stove developments ... all in one video: https://t.co/pfB08Bltyh pic.twitter.com/o8NQ1jvunV

Pirates: Somebody in Pittsburgh finally realized that this was the Hot Stove season. Yesterday, the team reached a one-year/MLB deal with OF Jarrod Dyson. The Cubs had considered Dyson earlier this winter, but most likely passed, based on his offensive numbers and age (35). Dyson’s defense will help fill the void left when the team traded Starling Marte, but it won’t likely help their offense.

Trevor Bauer: Yep, this may be costly for Bauer, but he’s fed up with MLB and Rob Manfred. Testify, brother!

This rant is likely going to cost Trevor Bauer a lot of money, but if baseball is smart they will listen to him. pic.twitter.com/kDcmBhb9xb

Another of MLB’s problem children: I can only ask: What in the hell is wrong with some of these guys?

#BlueJays catcher Reese McGuire arrested last weekend for exposure of sexual organs and given notice to appear in court, according to Pinellas County Sheriff's Office: https://t.co/4LX9KLmPUA

An article on another site reports that “The incident in question occurred Friday afternoon in a public parking lot outside a Dunedin strip mall when a subject was seen inside an SUV exposing himself.”

Dunedin, near Clearwater FL, is where the Jays’ spring camp is located.

Giants: SF has added free agent righty Trevor Cahill. This is a minor league deal with an invite.