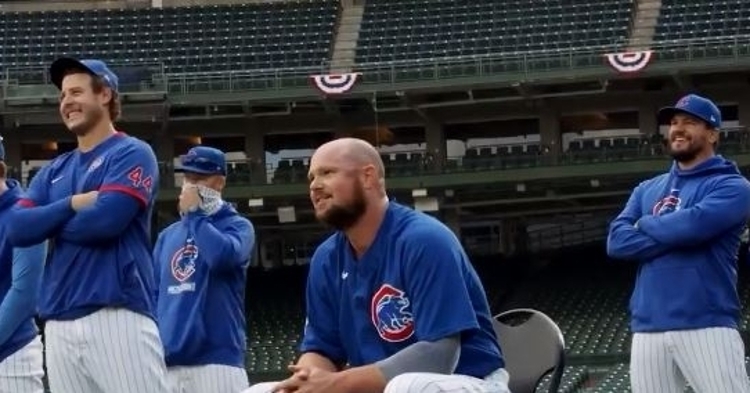 Best wishes to Lester on his procedure

First off, it was announced that former Cubs pitcher Jon Lester will have a thyroid gland removed that has been troubling him.

He should be back before Opening Day and David Ross had the following reaction on hearing the news from his buddy.

“All the best to Jon. We’ll say a prayer for him. He’s not worried, so that makes me not worried.”

Jon Lester, as many know, was diagnosed with lymphoma in '06. Went through chemotherapy, returned to pitch for Red Sox in July '07, has been healthy ever since. Reported to Nats coaches/doctors this spring he was feeling tired. Thyroid issue discovered, he'll now have it removed.

The Cubs and the Mariners had a high-scoring affair contest that ended in a tie 8-8 on Wednesday afternoon.

Check out some of the highlights from the contest shown on ESPN.

Anthony Rizzo had one of the longest homers ever at Sloan Park:

“You better have your shit in line” pic.twitter.com/0hjflrT8Yv

Javy Baez was being interviewed by ESPN when the Mariners made a great play in the outfield robbing Rizzo:

Javy Baez reacts to Anthony Rizzo lining out to the track, sends ESPN to break. pic.twitter.com/VTdMeCTs2L

The Cubs are signing veteran infielder Eric Sogard to a minor league deal on Wednesday, pending a physical:

Cubs reliever Dillon Maples has changed up his delivery on the mound:

Dillon Maples displayed decidedly different mechanics on Tuesday, so I wanted to take a look at them. Here his is in July of 2020 vs. Game 2 of spring. Side by side via @CFCubsRelated pic.twitter.com/V5kCdEYeFF

In case you missed it, veteran reliever Pedro Strop is back with the Cubs and very happy about it:

Pedro Strop on re-signing with #Cubs: "I'm just so happy to be back": https://t.co/xtzIskVQj3 pic.twitter.com/FWPABjtvXY

A few pics from Thursday's game:

Five years ago, Munenori Kawasaki brought the house down with this romantic ballad:

5 years ago today, Munenori Kawasaki gave us the best concert at Spring Training. He sang, “I don’t want to miss a thing”. Kawasaki was so much fun to have on the team. ??

More flashback moments with comedian Will Ferrell at Cubs camp five years ago:

#TBT to Will Ferrell's Spring Training appearances throughout the Cactus League in 2015.

He had quite the stint with the @Cubs. ?? pic.twitter.com/0nWaIlo7gk

The Cubs were on hand to watch batting practice from veteran slugger Yoenis Cespedes recently:

Cute video of Kris Bryant and his young son Kyler walking around the facilities at Sloan Park:

Grandpa Rossy still knows how to throw the baseball around a little:

The Triple-A including the Iowa Cubs will be delayed a month while more vaccines get administered throughout the country:

Triple-A to be delayed a month as alternate sites return in 2021: https://t.co/ODDNFuOBIY pic.twitter.com/gJ8LjQEhvw

Best wishes to Yankees manager Aaron Boone as he is having a procedure to put in a pacemaker.

“The thoughts of the entire organization are with Aaron and his family as he undergoes this procedure and takes the time he needs to properly heal,” said Yankees Managing General Partner Hal Steinbrenner. “Aaron leads our players, coaches and staff with a rare combination of work ethic, intelligence and a genuine concern for others. Our only priority at this time is Aaron’s health and well-being, and we will support him in every way throughout his recovery.”

The New York Yankees today announced that Manager Aaron Boone is taking an immediate medical leave of absence to receive a pacemaker. Surgery is expected to be performed later today at St. Joseph’s Hospital in Tampa.

Sending ?? to our skipper. pic.twitter.com/rwJo0hAMDd

Wrigleyville is getting a Cane's, which is mostly chicken fingers and fries. It's gonna pretty delicious!