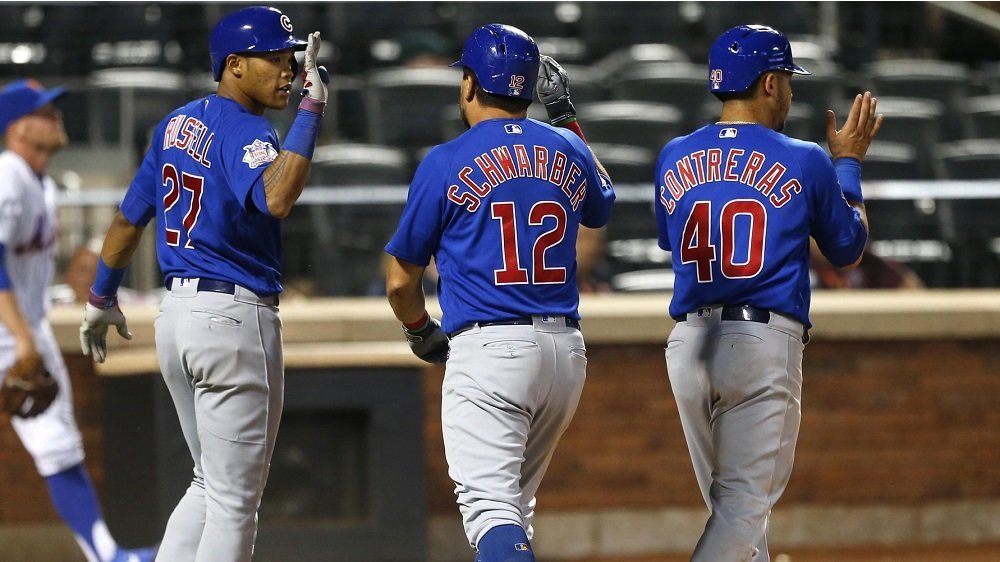 QUEENS — While it is almost impossible for a team to strike out 24 times, leave 32 runners on base and somehow find a way to win, the Chicago Cubs did just that in a 14-inning dogfight with the New York Mets.

Prior to the 14th inning, the Cubs loaded the bases on four separate occasions, three of which came with fewer than two outs, and mustered just one run. Outhitting the Mets 17-7, Chicago could have easily won by a sizable margin in a contest substantially shorter than the nearly five-hour one that actually took place.

But, unfazed by their abundance of missed opportunities, the North Siders came through in the clutch when it mattered most, pulling off a hard-fought triumph on the road. Winning 7-1, the Cubs used a six-run explosion in the top of the 14th to produce the deceptive margin of victory. Young Cubs reliever Luke Farrell put forth the best outing of his burgeoning career, giving up just two hits while striking out seven in five innings of relief.

On the flip side, New York's pitching was not too shabby, either, establishing a new franchise record for strikeouts amassed versus the Cubs. Mets ace Jacob deGrom was responsible for 13 of those Ks, and his solid performance with runners on base prevented the Cubs from garnering a large lead over the Mets during the middle innings.

Throwing seven innings of seven-hit ball, deGrom was followed by seven different Mets relievers. The Cubs, on the other hand, opted to trust Farrell's arm. Chicago's Mike Montgomery, who made just his second start of the year on the hill, pitched well in six innings of work. His only mistake came in the form of a fastball thrown over the middle to the Mets' Michael Conforto in the sixth inning. That pitch resulted in a solo home run for Conforto, which was the lone run of the game for the Mets.

After striking out in back-to-back at-bats to waste a bases-loaded situation and end the top half of the first inning, the Cubs next boasted a decent scoring chance in the sixth frame. After a pair of singles placed runners on the corners with no outs, Cubs first baseman Anthony Rizzo procured his 38th RBI on a single to left-center that scored right fielder Jason Heyward, who went 4-5 in the contest.

Cubs skipper Joe Maddon then had catcher Willson Contreras bunt to advance the remaining runners to second and third. An intentional walk ensued, in order to open up the double-play possibility for the Mets. However, with the bases loaded and just one out, the Cubs again failed to score. A pair of Chicago strikeouts set the stage for Conforto's game-tying home run in the next half-inning.

The top of the ninth saw the Cubs nearly pull off a two-out rally against Mets closer Jeurys Familia. Zobrist and Heyward each singled with two outs to place runners on first and third, but Cubs third baseman Kris Bryant grounded out to shortstop to usher in extra innings. Bryant experienced one of the worst games of his career at the plate, going 1-8 overall and 0-4 with runners in scoring position.

Bryant ended another inning in woeful fashion for the Cubs when, in the top of the 13th, he struck out swinging with runners on second and third. Earlier in the inning, the Cubs benefited from one of the Mets' three errors on the night, as catcher Kevin Plawecki made an errant throw to second base in an attempt at throwing out a stealing Ian Happ.

Happ subsequently took third base with just one out. Chicago's Ben Zobrist was intentionally walked thereafter, and he, too, stole second base. Once again, though, the Cubs wasted a scoring opportunity.

While the Cubs at least created scoring chances, the Mets were fairly innocuous on the offensive end all night long. Following Conforto's home run, the Metropolitans advanced just one runner into scoring position prior to an auspicious 13th inning that they failed to capitalize on.

Recent pick-up Jose Bautista doubled with two outs in the 13th to set up a winning opportunity for New York. Conforto was then intentionally walked, and, after that, an unintentional walk issued by Farrell loaded the bags. But the second-year reliever remained calm in the face of adversity, forcing Plawecki to hit into an inning-ending groundout.

Given new life, the Cubs finally broke the seven-inning scoreless stretch by pouring it on the Mets in the top of the 14th. After Contreras and outfielder Kyle Schwarber both singled with one out, center fielder Albert Almora, Jr., provided the winning hit. Serving as his only hit of the evening, Almora, Jr., drove in a pair of runs on a double to deep right-center off Mets reliever Buddy Baumann.

Almora, Jr., advanced to third base due to a throwing error by Asdrubal Cabrera on the play, and, after two straight walks were issued, Gerson Bautista was brought in to pitch for the Mets. He was unable to prevent the Cubs' lead from growing, as he allowed Almora, Jr., and Cubs shortstop Addison Russell to touch home plate on a two-run double by Zobrist.

Javier Baez then entered as a pinch hitter for Farrell, and "El Mago" essentially put the game out of reach, clubbing his 14th home run of the year on a 392-foot shot to left. Baez now boasts a National-League high 45 RBI for the year.

With his team leading 7-1, Cubs closer Brandon Morrow sat down three Mets hitters in short order in the bottom of the 14th, finalizing the Cubs' 7-1 victory that took four hours and 53 minutes to attain. With the win, Farrell improved to 2-2 overall, while Baumann was handed the loss after getting charged with four earned runs, dropping him to 0-2.

The scoreboard certainly does not suggest this was a 14-inning game!
Luke Farrell joins @Ken_Rosenthal after tossing 5-shutout innings.
Cubs def. Mets, 7-1 pic.twitter.com/PIAnVKjpzx

Despite the struggles with men on base and the plethora of strikeouts, the Cubs (32-23) far outmatched the Mets (27-29) offensively in the ballgame, tallying 10 more hits and five more walks. Coming out on top in a grueling matchup that featured poor situational play by both squads and a combined five errors, Chicago assuredly gained a lot of character with this win. Having now won three in a row at Citi Field and six out of their last seven overall, the Cubs will be aiming to secure a four-game sweep of the Mets on Sunday afternoon.