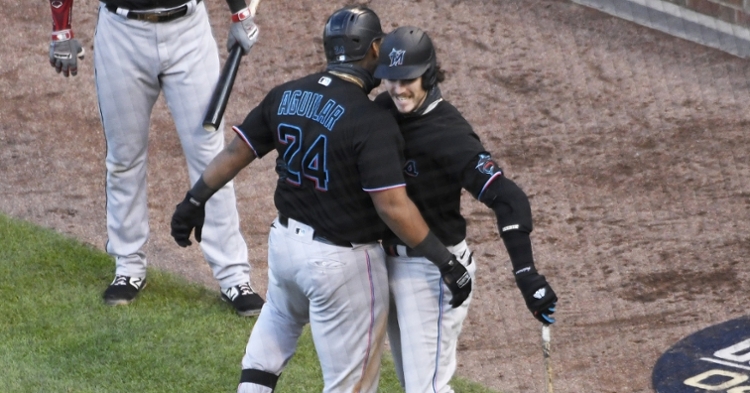 The Marlins scored five runs via two homers in the seventh inning, and the Cubs failed to cut into their deficit, losing 5-1. (Credit: David Banks-USA TODAY Sports)

CHICAGO — If he were around to do so, Ernest Hemingway, the late author of The Old Man and the Sea, would empathize with the No. 3-seeded Chicago Cubs (0-1), who failed to reel in the No. 6-seeded Miami Marlins (1-0) in the opener of the best-of-three Wild Card Series at Wrigley Field. Cubs ace Kyle Hendricks started on the mound in the Cubs' first postseason game since 2018, and he was stellar until giving up a go-ahead three-run jack in the top of the seventh.

The Marlins were victorious on Wednesday, coming out on top in their first playoff affair since 2003. Miami pitcher Sandy Alcantara shined in his start, with the only run allowed by him coming on a solo home run from Ian Happ. The Fish plated five runs via two round-trippers in the seventh frame, and the Cubs, who were limited to four hits, fell 5-1.

T1: With winds of over 20 mph blowing out to right, Hendricks took the mound and worked a 1-2-3 opening frame. On a shift, second baseman Jason Kipnis made a nice catch in the 5-6 hole to end the half-inning. Kipnis jumped in order to catch a liner off Jesus Aguilar's bat and was able to secure the snag after the ball hit off the top of his glove.

B1: The Cubs went down in order their first time up to the plate. Kris Bryant popped up, and second baseman Jon Berti was able to track it down and catch it with the wind making the play much more difficult than it would have been under normal circumstances. Berti gloved the ball right before falling down.

T2: To start the second inning, Hendricks struck Brian Anderson out looking on a filthy sinker. Hendricks gave up his first baserunner by walking Matt Joyce with two outs. Kipnis then made another inning-ending catch. This time, he pulled off a much simpler catch in the 3-4 hole, with Berti lining out.

B2: With light rain falling, Kyle Schwarber drew a leadoff walk, and Javier Baez advanced him to second with a two-out base knock to left. Alcantara escaped the inning unscathed, as Victor Caratini grounded out to leave both runners stranded.

B3: Marlins shortstop Miguel Rojas stopped a worm burner off the bat of Happ from heading into the outfield, but Happ was still able to reach for an infield single. The one-out base hit was squandered, however, as the third frame ended with Kris Bryant taking strike three.

T4: Aguilar, who, as a former Milwaukee Brewer, is familiar with Hendricks, led off with a double laced into the left field corner. Hendricks worked around the two-bagger by drawing three straight groundouts. A grounder hit to second advanced Aguilar to third base, and an ensuing scorcher hit right to Bryant at third held Aguilar at the bag. Joyce hit into the third out by smacking a chopper to Anthony Rizzo behind first base. Rizzo trotted to the base and recorded the putout himself, ushering in the bottom of the fourth.

B4: Schwarber took ball four on a full count for a leadoff walk. Soon afterward, Jason Heyward hit a grounder that should have resulted in an inning-ending double play. The Cubs were given new life when Berti, who stepped on second to out Schwarber, fired an off-the-mark throw to first. Berti's throwing error allowed Heyward to reach second base, and first baseman Garrett Cooper nearly committed a throwing error himself with a wild, unnecessary throw to second that sailed into shallow left-center. Heyward remained at second, and Baez flied out to left to waste the throwing error.

T5: The Cubs returned the favor by helping out the Marlins via a throwing error of their own. Like the North Siders, the Fish failed to take advantage. Berti was hit by a pitch to lead off the fifth and, following multiple pickoff attempts, proceeded to steal second. Rojas then hit a routine ground ball to Baez at shortstop, but "Javy" airmailed his throw to first. Rojas stayed at second on the play. Chad Wallach hit into a 5-3 double play, with Bryant stepping on third after fielding the grounder and firing a perfect throw over to Rizzo. Rojas took third thanks to a passed ball that resulted from catcher Willson Contreras getting crossed up by a Hendricks pitch. Hendricks remained composed and drew a groundout off the bat of Dickerson, with Bryant making another throw across the diamond.

B5: Going yard with two outs, Happ skied an opposite-field home run while batting from the left side of the plate. The 360-footer to left field barely cleared the wall and came on a 1-2 count. Happ sent a 97-mph four-seamer from Alcantara into the bleachers for his first career playoff homer. The Cubs' bullpen celebrated the dinger with toy musical instruments.

Gonna tell our kids this was Dave Matthews Band pic.twitter.com/twSQXZC0jU

T6: Marte, a former Pittsburgh Pirate, led off with a double to left. Schwarber's throw to second bounced past Kipnis, and Marte slid in safely. Cooper garnered a base on balls with two outs, but, after that, Joyce flied out to Happ in center field, with Happ making a sliding catch to avoid colliding with a charging Schwarber.

Joyce just missed this change up out over the plate. And he knows it. #Marlins pic.twitter.com/qOyJqVyLyl

B6: Contreras led the majors with 14 hit by pitches in the regular season, and he took a pitch of his elbow guard for a two-out hit by pitch in the sixth. Heyward concluded the inning by fouling out to Wallach, with the catcher fighting off the wind and making a solid catch with his bare hand after the ball bounced out of his mitt.

T7: Hendricks came unglued in the seventh and was arguably left in a little too long. Berti and Wallach hit back-to-back one-out singles, and Dickerson then took Hendricks deep with a three-run blast to left-center. The 384-footer came on a first-pitch 87-mph four-seamer. Jeremy Jeffress relieved Hendricks, and gave up a single to Marte and a two-run homer to Aguilar in his first two plate appearances. Aguilar's 366-footer off a breaking ball was aided by the wind as it carried out to right. Jeffress struck out the next batter, and, after Cooper singled with two away, he tallied another strikeout to get the Cubs out of the brutal half-inning. Dickerson's three-run bomb was the only hit of the afternoon by either team with at least one runner in scoring position.

B7: After walking Kipnis with two outs, Alcantara had his quality outing ended. Richard Bleier relieved Alcantara and forced Happ to ground into a fielder's choice on his first pitch.

T8: Ryan Tepera walked Berti to begin the eighth. Berti then tabbed his second steal of the day. The Cubs challenged the call, thinking that Kipnis applied the tag in time, but the ruling stood. A wild pitch allowed Berti to advance to third. Tepera recorded two strikeouts in a row before being relieved by Andrew Chafin, who forced Dickerson to ground out.

Cubs challenge call that Jon Berti is safe at 2B in the 8th; call stands, runner is safe. Powered by @Mitel. pic.twitter.com/3aIuhOnDnN

B8: Yimi Garcia sat the Cubs down in order. While dealing with the glare, Rojas was able to catch a high popup hit by Rizzo to shallow left field. Garcia struck the next two batters out.

T9: Dan Winkler hit Marte on the hand with a pitch that got away from him. Marte, who was hit in the helmet with a pitch on Sunday, was subsequently removed from the game. Winkler registered three outs in a row after that, including two strikeouts.

B9: Former Cub Brandon Kintzler pitched the bottom of the ninth. Contreras slapped a leadoff double down the first baseline to lead things off, but the Cubs suffered three straight outs thereafter, resulting in the Marlins going up 1-0 in the series. Alcantara earned the win, making him 1-0 in the 2020 postseason, and Hendricks' 2020 playoff record dropped to 0-1 via the loss.

Up Next: Game 2 is scheduled to begin at 1:08 p.m. CDT on Thursday, Oct. 1. There is a chance for rain in Chicago throughout the afternoon, and the wind is expected to be blowing between 10-15 mph. Cubs right-hander Yu Darvish (0-0, 0.00) and Marlins right-hander Sixto Sanchez (0-0, 0.00) are slated to start on the bump, marking Darvish's postseason debut with the Cubs. If the Cubs lose Game 2, their season will be over, and the Marlins will advance to the National League Division Series.