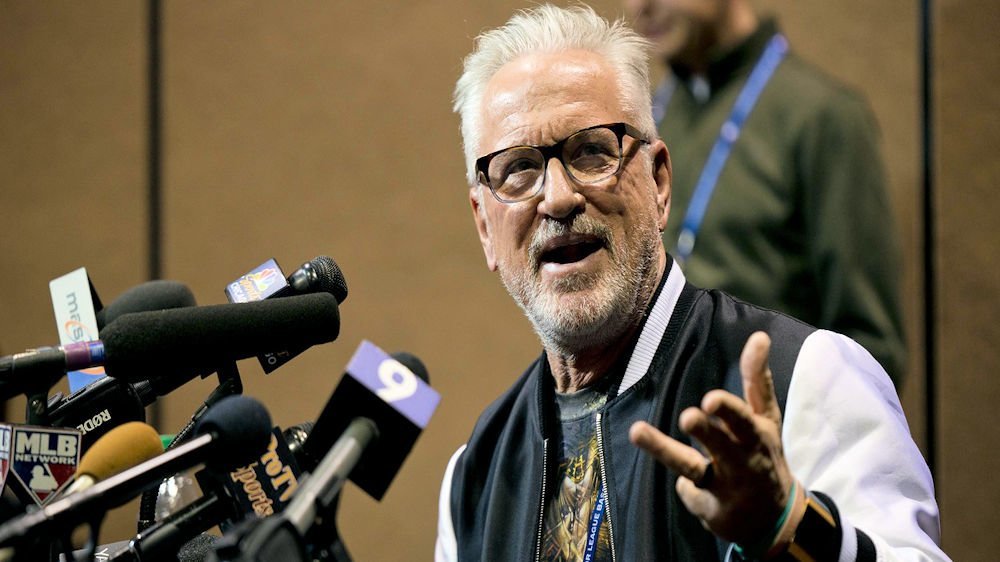 Joe Maddon: When asked in Las Vegas about his lame-duck status, Maddon replied, “Let's just win the World Series and see how that all plays out." When Big Joe was asked about raising expectations in Chicago, he said, “I am not going to apologize for averaging 97 wins. At the same time, I get it “

Brandon Hyde: Just about the time the Cubs had the coaching roster filled up, they’ll be short another one. The Orioles are expected to formally announce today, that (former) Cubs’ bench coach, Brandon Hyde, will be taking over as manager of the team. If any good can come out of this for the Cubs, it may provide David Ross with the opportunity to step back into the clubhouse in Chicago. Theo Epstein has said he wanted Ross in a bigger role in 2019.

Relievers on the agenda: According to Gordon Wittenmyer of the Sun-Times, the Cubs are looking to add two “established” but not “high-end” relievers over the coming weeks.

Maddon’s Millennials: According to Jesse Rogers, it’s no joke- Joe Maddon is reading “Managing Millennials for Dummies.” (Something Chili Davis should have checked out as well)

That exchange with Maddon was pretty funny. He mentioned the name of the book, Managing Millennials for Dummies, and everyone thought he was kidding. He wasn't. There is a book called that and he's reading it.

Latest from the winter meetings and Hot Stove

Nelson Cruz: According to Jon Morosi, the race to sign Cruz is down to two teams: The Rays and the Twins.

Wilmer Flores: Eight teams are reported to have interest in the former Mets’ infielder who was non-tendered last month.

Yasmani Grandal: Although the Mets are hunting for JT Realmuto, Grandal has reportedly become their backup plan. Also in the hunt for the former Dodgers’ backstop are the Chicago White Sox.

Yusei Kikuchi: Add the Yankees and Mariners along with the Giants for teams vying for the Japanese hurler. Yankees are said to be scouting him for an extended period, and GM Brian Cashman says Kikuchi is “somebody that’s worthy of having conversations about potentially landing.”

Ian Kinsler: The Tigers, Brewers, Athletics, and Nationals are all reported to have interest in the free-agent 2B.

Cardinals: St. Louis is reportedly talking to SF about southpaw relievers Will Smith and possibly Tony Watson. Reports have the Red Birds willing to deal slugger Jose Martinez for such a reliever.

Dodgers: Reports say LA is now “actively trying” to trade Yasiel Puig and Matt Kemp, and are reportedly talking to the Cards about OF Jose Martinez.

Giants: SF is looking less likely to trade Bumgarner now, but he is expected to move before the summer trade deadline, according to reports. SF also considering SS Troy Tulowitzki.

Mariners: Mariners say Haniger is not untouchable, but it would take a three to four player return, including two top prospects for them to let Haniger go. Next, just a week or so after acquiring Carlos Santana, the Mariners’ phone is blowing up with offers to trade for him. The Rays, Indians, Rockies, and Marlins have all made inquiries at this point.

Nationals: Washington says they will consider trading Tanner Roark, but not until they have another starter in place. (I wonder f they’d consider a deal for Tyler Chatwood? Yu Darvish? Both?). Washington is also said to be eyeing 2B DJ LeMahieu.

Phillies: The Phillies met with Scott Boras Tuesday to further discuss Bryce Harper, even after signing Andrew McCutchen. Boras also discussed another client of his, Zach Britton, with the team, as the Phillies are said to be aggressively pursuing him.

Rangers: Texas acquires INF Patrick Wisdom from the Cardinals in exchange for IF/OF Drew Robinson. Rangers also reported having keen interest in Charlie Morton, despite being in a rebuilding process. The Rangers have even been talking to the Mets and Braves in an attempt to find pitching, though no specific names were mentioned publicly.

Red Sox: The Red Sox have signed a minor league deal with former SF outfielder, Gorkys Hernandez. If promoted, Hernandez will receive a $1M salary in the majors.

Reds: Reds reportedly in talks with the Dodgers over several possible trades. Names are said to include Yasiel Puig and Reds’ starter, Homer Bailey. The Reds have also talked to the Braves about Ender Inciarte but no deal is imminent, and it is not known who the Braves have asked for in return.

Rockies: The Rockies are in pursuit of a first-baseman, and have shown interest in Carlos Santana, Jose Abreu, Edwin Encarnacion, and Wil Myers. Colorado has also hired Dave Magadan as their new hitting coach.

White Sox: In addition to meeting with Machado, the Sox have also checked in on OF Michael Brantley. The Sox continue to pursue Harper as well, though the club says they don’t view themselves as favorites to land either.

Yankees: NY reportedly open to trading Miguel Andujar. Andujar has been mentioned as a piece in a possible three-way trade with the Marlins and Mets that would also involve Noah Syndergaard and JT Realmuto. NY Gm Brian Cashman also met with Adam Ottavino’s representatives on Tuesday.