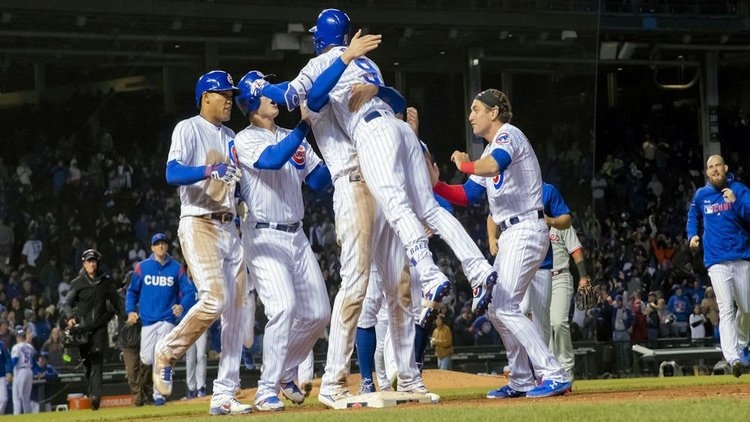 As we approach week 10 of the marathon that is an MLB season, the Cubs have proven that they belong atop the league’s toughest division, but the Brewers are just inches behind them.

CUBS: This has arguably been one of the Cubs’ best weeks of the season so far. Not entirely because the Cubs took won six of seven games this week against the Angels, Rockies, and a sweep of the Cardinals. Although that will never hurt, the real positive of the week was the major splash the Cubs made in the free agent market. The Cubs found the answer to the question mark at the backend of the bullpen and coincidentally alerted the rest of Major League Baseball that the Cubs are legit championship contenders when they signed Craig Kimbrel. Lengthening the bullpen with such a dependable starting staff already makes this pitching staff scary good, to pair with one of the best offenses baseball has to offer.

ON DECK: After a one-loss homestand, the Cubs travel to Colorado and Los Angelo’s to take on two solid NL West teams that they could meet up with in October.

WHO'S HOT? Kyle Schwarber has morphed into the Cubs’ leadoff man and was red hot at the plate this week. Schwarber hit .417 with two bombs and six driven in. Victor Caratini hit .417, and Javy Baez hit .310 with three dingers and 10 RBIs. Cole Hamels and Kyle Hendricks pitched a total of 22 innings last week which accounted for three wins and only four runs allowed.

WHO'S COLD? Anthony Rizzo had a rough week at the plate, hitting a mere .160 with hardly any power numbers. The only name that brings about some concern on the staff is Pedro Strop, who had an era over 3.00 in three appearances last week.

BREWERS: The Brewers hung right behind the Cubs last week, riding Yelich and co. to a great week. Even though the team failed to land Kimbrel or Keuchal, the Brewers look hot in both sides of the game. Although the Brewers got spanked by the Marlins in a pair of games, they recovered by beating the Marlins and sweeping the Pirates over the weekend.

ON DECK: The Brewers take on the Astros for a two-game series before taking on the Giants over the weekend.

WHO'S HOT? Christian Yelich raked last week, racking up 12 hits for a .600 batting average. Yelich also clubbed two dingers to reach 24 bombs and its only the second week of June. Mike Moustakas clubbed four long balls in the past week to bring his season total to 20 already. Josh Hader saved three games last week without allowing a run.

WHO'S COLD? Orlando Arcia and Lorenzo Cain both struggled mightily at the plate this past week. The pair tallied nine hits in 43 at-bats. The Brewers starting staff was not phenomenal last week, but they ended up with a 4-2 record.

CARDINALS: The Cardinals go through stretches where they look like they’re about ready to get hot and take off into the playoff picture, and directly after that they fall back down to near .500 and disappoint. After sweeping the Cubs last weekend and splitting with the Reds this week, the Cardinals got swept by the Cubs and fell a game below .500.

ON DECK: The Cardinals take on a pair of bottom feeders as they play the Marlins and the Mets this week.

WHO'S HOT? Marcel Ozuna looked like an all-star at the plate last week, as he hit .368 and drove in a trio of runs including himself on a bomb. Paul Dejong also hit a pair of jacks. Flame-throwing Jordan Hicks has been pitching well out of the pen for the Redbirds.

WHO'S COLD? Dexter Fowler and Jose Martinez both hit below .200 over the past week, with neither of them driving in a run. Jack Flaherty and John Gant have been scuffling in the mound, both with ERAs above nine last week.

PIRATES: Despite the occasional red hot stretch these Pirates sporadically run into; they don’t quite look like a playoff team. That being said, the Buccos do have a few all-stars that make their games exciting and their future compelling. The Pirates lost two out of three from the Braves and got swept by the Brewers to send them below .500 and into fourth place in the ever so contested NL Central.

ON DECK: The Pirates stay on the road for four against Atlanta and then three more in Florida against the Marlins.

WHO'S HOT? The entire Pirates outfield has been hitting the stuffing out of the ball. Starling Marte, Gregory Polanco, Melky Cabrera, Bryan Reynolds all sported a .300 plus average. Chris Archer and Joe Musgrove both pitched well for the Pirates this past week as well.

WHO'S COLD? Adam Frazier and Kevin Newman have been cold for the Pirates, both struggling mightily this week. Francisco Liriano has an ERA well above 10 in the past week, and he was one of four Pirates with an ERA above ten last week.

REDS: The Reds are known across baseball this season as the best last place team. With great names on paper in both their everyday lineup and starting staff, the Reds can put up a ten spot every game and not give up a run. But inconsistency has been this team’s Achilles heel. The Reds lost one of two against the Cardinals and one of three against the Phillies last week.

ON DECK: The Reds take on inner state Indians for a pair before hosting the Rangers over the weekend.

WHO'S HOT? Joey Votto finally looks close to busting out of his slump and hitting the way he can. Votto hit .333 last week and drove in three. Rookie Nick Senzel also had a solid week at the plate for the Reds. Luis Castillo continues to put up Cy Young caliber numbers on the mound for the Reds.

WHO'S COLD? Yasiel Puig, Derek Dietrich, and Eugenia Suarez have all been struggling at the plate, all of them hitting below .200 in the past week for the floundering Reds. Tanner Roark had a rough start last week, and Michael Lorenzen was not very good out of the pen, the pair accumulated ERAs over 7.00.

As the baseball season rolls along through the hotter summer months, this division is turning in to a bloodbath between the Cubs and Brewers. The Cubs have the edge by a few percentage points and reinforcements in Craig Kimbrel on the way.