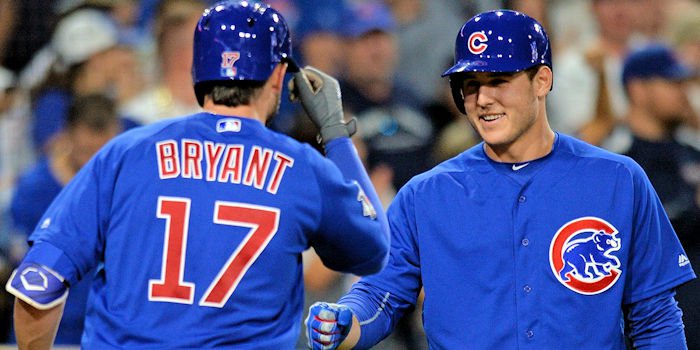 CHICAGO -- The 2017 baseball season was a wild ride for the Cubs filled with twists and turns as they started off with a very mediocre first half of the season, falling 5.5 games back of the Milwaukee Brewers at the All-Star break. The Cubs then stormed back and took the division crown and punched their ticket to the playoffs. After a thrilling game five win on the road against the Washington Nationals, the Cubs stalled out in Los Angeles and failed to advance to a second consecutive World Series. Despite losing to the Dodgers, the Cubs advancing to three straight National League Championship Series is no small feat. Going deep into the playoffs is hard on any team to do once, to repeat that success just adds to the difficulty. The Cubs should be proud of the run they made but will not be complacent. As nice as it is to get to the NLCS, once you taste the champagne of a World Series victory, you crave that taste. For the Cubs to get to that point again, they have some work to get done first.

Before getting into what the Cubs need to fix, it’s important to address what doesn't need to change. There is no reason to overreact to a loss to the Dodgers so much that it makes the Cubs take a step back. With that being said, it is important to state that Joe Maddon is not going anywhere and nor should he. Maddon faced criticism for his bullpen use in the 2016 playoffs but still led the Cubs to a championship. Maddon has 292 wins in three seasons in Chicago with three straight NLCS appearances and a World Series win. There is no manager who the Cubs could fill in for Maddon and get better results. The Cubs have made some coaching changes in this offseason, but they will not be changing managers in the near future.

Although they had a dismal offensive output in the NLCS, Anthony Rizzo and Kris Bryant are still the center pieces of the Cubs lineup. They will be fine and the offense will be fine with some tweaks. In fact this Cubs offense in more than just fine, they are elite. Overreacting based on tough pitching by the Dodgers would be a mistake. The Cubs should not make any major changes to this lineup. The biggest upgrade the Cubs can make is just maturing. It is easy to forget how young this lineup is and how important it is for them to mature. With Bryant and Rizzo in the heart of the lineup the Cubs still have plenty of offense in their lineup.

Kyle Schwarber, who is going to have a much better season will be huge for them. Javy Baez and Addison Russell will be key contributors next season with another year under their belt. Russell can be an elite offensive performer next season as long as he enters the season with a clear head and avoid off the field distractions. Baez, has the skills to be a force in the lineup if he can continue to improve his two-strike approach and not expand the strike zone as often. Albert Almora Jr. has added quite a bit of muscle since his debut and has made himself a solid offensive player as well as a superior defender. The Cubs could benefit with the addition of a more natural lead-off man, especially if Jon Jay leaves in free agency, but that is not a main focus this offseason and don’t expect the Cubs to burn many assets to acquire a leadoff man.

The real issue affecting the Cubs is what they are going to do about the pitching staff. John Lackey is figured to retire and Jake Arrieta is entering free agency. Arrieta will be targeted by the Cubs but will be a difficult player to resign as he will be seeking a long term contract that is difficult for the Cubs to sign off on. The Cubs have the money to pay Arrieta a lot of money, they just can’t spread the dollars out over multiple years. With the contracts of other position players looming, the Cubs cannot afford to pay a 31 year old starting pitcher for the next seven years.

Assuming the Cubs don’t bring back Jake Arrieta, the Cubs rotation will be down to Jon Lester, Kyle Hendricks and Jose Quintana as there front three starters. The Cubs are in a good position with the front of the rotation, they just need to find pitchers to solidify the back end. After already making a blockbuster deal last season to acquire Quintana it is not likely the Cubs will make another major splash this offseason. The Cubs will likely fill in the final two spots of their rotation by adding a veteran who can eat up some innings and possibly a rookie could start for the Cubs in the 5th spot. A pitcher like Jeremy Hellickson may be attractive to the Cubs for his reliability to throw many innings each season. Hellickson would slot in nicely behind the three Cubs all-star caliber pitchers and eat up the innings to save very thin bullpen. Mike Montgomery could fit in and make some starts, although the Cubs would prefer to keep him in the bullpen if possible.

The major facet of the team which the Cubs need to address in the bullpen. The bullpen seemed paper thin down the stretch and may get thinner as Wade Davis will be a coveted free agent. The Cubs will work diligently to bring Davis back and continue to strengthen the bullpen. The bullpen pitched very well for the Cubs in the first half of the season but struggled in the second half. The Cubs need to add some pieces as well as see continued improvements from Carl Edwards Jr. and Mike Montgomery. Edwards and Montgomery have shown they have the stuff to be really effective for the Cubs but their youth appeared as they struggled greatly in the playoffs. However, they are two bright spots in the Cubs bullpen and they are expected to be better next year. Hopefully this offseason will help reliever Justin Wilson get used to being a Cub and he can contribute in the bullpen. The Cubs are likely to part ways with Hector Rondon after he has been unable to return his 2015 form. If the Cubs are going to trade off their major league roster it is likely that they would be looking to bolster this part of the team. A name that they could look at is Baltimore Orioles pitcher Zach Britton. Britton is one of the premier relief pitchers in baseball and could be a key left-handed asset for the Cubs. The Cubs were interested in him at the trade deadline and that interest could very much still be there.

With reliable starters and a bolstered bullpen to go along with their already high powered offense, the Cubs will look towards 2018 with one goal in mind, to get back to being the champions of baseball.