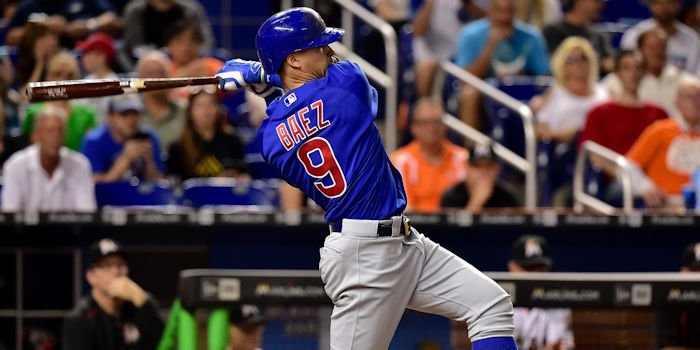 PITTSBURGH -- Javier Baez hit a grand slam and had six RBIs while Kyle Hendricks pitched six scoreless innings as the Chicago Cubs won their 100th game in a 12-2 rout of the Pittsburgh Pirates on Monday evening. The Cubs have won 100 games for the first time since 1935, and just the sixth time in franchise history.

Baez hit his second career grand slam in the fourth inning to give Chicago a 5-0 lead and later added a two-run single in a six-run sixth inning to extend the Cubs margin to 11-0.

Every Chicago hitter had at least one hit except for Addison Russell as the Cubs totalled 18 hits on the night and six walks.

Hendricks (16-8) lowered his major-league leading ERA to 1.99 by giving up seven hits, striking out five and walking none. Hendricks has allowed three or fewer earned runs in 22-straight starts, the longest streak of his career and the best such streak in the majors this season.

Kris Bryant hit a two-run home run in the sixth which was his 39th of the season. The last Cub with at least 39 homers in a season is Derrek Lee, who belted 46 in 2005. The homer also gave Bryant RBIs Nos. 100 and 101 on the season after reaching 99 last season.