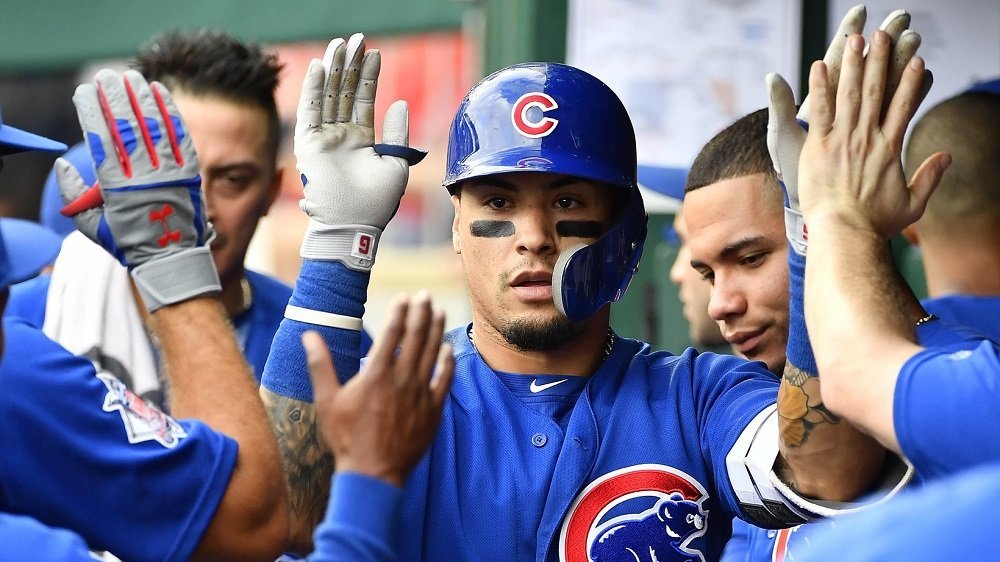 A bunt by Javier Baez on a high pitch provided the Cubs with the winning run against the Nationals. (Photo Credit: Brad Mills-USA TODAY Sports)

WASHINGTON, D.C. — Despite taking part in a makeup game on relatively short notice, the Chicago Cubs and the Washington Nationals provided plenty of excitement in a 10-inning clash at Nationals Park. After having their matchup on Sunday canceled due to rain, the Cubs and the Nationals met on Thursday for the seventh and final time this season. Winning 4-3 on a safety squeeze in the 10th inning, the Cubs rallied around superstar infielder Javier Baez, who went 3-4 and drove in the winning run with an unorthodox bunt.

The Nats took a 1-0 lead in the bottom of the third on a solo home run by catcher Spencer Kieboom, who hit his first career dinger just two days prior. The Cubs answered with a two-run fourth frame. Kris Bryant, who started in right field and went 3-5 at the dish on the day for Chicago, led off with a single and was scored two at-bats later on a double to right by Baez. Baez was then scored himself on single to right-center off the bat of catcher Victor Caratini that put the Cubs ahead 2-1.

In the bottom of the fifth, the Nationals knotted the contest up at two runs apiece when Adrian Sanchez was drawn home on a sacrifice fly by Victor Robles. Baez put the Cubs back on top in the sixth inning with a 384-foot jack to right for his 31st homer of the year. Later, in the bottom of the seventh, Nationals shortstop Trea Turner came up with a two-out double to deep left that scored Robles and made the score 3-3.

Both clubs used an abundance of arms in the game, with a combined 16 pitchers seeing action. Cubs starter Mike Montgomery got pulled after pitching four innings of two-run ball, and Nationals starter Joe Ross produced a five-inning stint, in which he was taken for two runs. The Cubs had a great opportunity to take the lead in the eighth against Nationals relief pitching, but two straight strikeouts with the bases loaded ended the inning, as well as the scoring threat.

Baez made up for the missed opportunity, though, by providing the Cubs with a 4-3 edge on a surprise bunt in the top of the 10th. Bryant was scored on the play, and he initially put himself in position to score by clubbing a one-out double. Thereafter, former Nationals and current Cubs second baseman Daniel Murphy reached on an infield single that put runners on the corners.

Next, with All-Star Nationals closer Sean Doolittle on the bump, Baez helped the Cubs execute a safety squeeze by drilling a long bunt single toward the dirt between first and second base. Laying down the bunt on a pitch that was rather high to warrant a bunt attempt, Baez found a way to deliver in a clutch spot, and Cubs reliever Randy Rosario went three up, three down in the bottom half of the inning for his first career save.

Pedro Strop picked up the win for the Cubs to improve to 6-1. Unfortunately, Strop was hurt on offense, suffering a hamstring injury that might keep him out for a few weeks when attempting to beat out a throw on an inning-ending double-play groundout in the top of the 10th. Doolittle received the loss to drop to 3-3. The With the 4-3 victory, the Cubs (85-61) coincidentally won the season series over the Nationals (74-73) by a tally of 4-3.