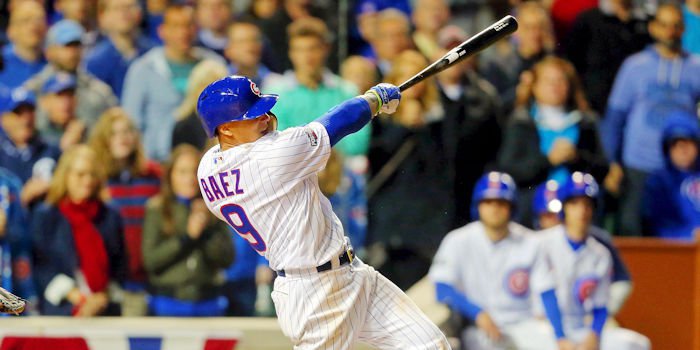 Hotshot Chicago Cubs infielder Javier Baez has been on a tear recently, hitting five home runs in the past week.

CHICAGO — Taking the field after two snow days, the Chicago Cubs lost the third of their last four games on Tuesday night, dropping a divisonal battle with the St. Louis Cardinals at Wrigley Field by a final score of 5-3.

In his delayed third start as a Chicago Cub, pitcher Tyler Chatwood was plagued by walks, falling to 0-3 on the year, despite an auspicious start. Chatwood made up for lost time early, showing signs of rejuvenation after having his start pushed back by two days because of weather postponements. The Cubs right-hander earned four strikeouts in the first two innings (and seven Ks overall), including this filthy strikeout of Cardinals infielder Tommy Pham in the opening frame.

Filthy and a little unfair. pic.twitter.com/zoosacuV51

Strangely enough, despite picking up an impressive number of strikeouts in just 4.2 innings pitched, Chatwood struggled mightily with his command, collecting seven walks. After walking the first two batters of the second inning, Chatwood was taken for an RBI double by Cardinals second baseman Matt Carpenter. Thereafter, Cardinals left fielder Marcell Ozuna brought in the second run of the night on an RBI groundout.

Pitching for the Cardinals on the evening was ace Adam Wainwright, who, like Chatwood, struggled with his command at times. Walking four batters in five innings, Wainwright nearly single-handedly allowed the Cubs to erase their 0-2 deficit with two outs in the bottom half of the third by walking two consecutive batters and then hitting a batter to load the bases. Wainwright was able to strike out Cubs outfielder Kyle Schwarber to end the threat, though.

Wainwright was not able to avoid giving up a run at his own expense in the next inning, however, with a blatant Wainwright throwing error on what should have been a simple groundout back to the pitcher from Cubs shortstop Addison Russell leading to the Cubs getting on the scoreboard. Former Cardinal Jason Heyward, the current starting right fielder for the Cubs, drove in Russell from second base on a single to right, pulling the Cubs to within a run.

Chatwood was pulled in the proceeding inning in favor of Cubs reliever Steve Cishek, who went on to throw 1.1 innings of two-hit ball. Chatwood himself gave up only one hit in 4.2 innings of work but was greatly hindered by walks. Cishek escaped a bases-loaded jam in the sixth, but fellow Chicago relievers Pedro Strop and Brian Duensing placed the Cubs into a sizable four-run hole in the top of the eighth.

With his lone hit of the game, Cardinals shortstop Paul DeJong cranked a two-out homer to left off of Strop in the eighth to put St. Louis up 3-1. Putting forth an impressive two-out rally, the Cardinals then loaded the bases on an infield single, a walk and an infield single, respectively, before Duensing was brought in to replace Strop. Then, Carpenter again came through in the clutch with a two-run single to center.

Cubs second baseman Javier Baez proved to be the only successful hitter in the contest for the Cubs, accruing three of the Cubs' six hits. Baez's biggest contribution came in the form of a two-run home run in the bottom of the eighth that pulled the Cubs back into the game. Scoring Schwarber, the dinger to left-center marked Baez's fifth homer of the year.

The Cubs did not have that same magic in the ninth, though, and lost 5-3 as a result, falling to 7-8 overall. As for the Cardinals, who improved to 9-7, they made the most of Carpenter's three-RBI performance. Wainwright earned the win, his first winning decision of the season, and Bud Norris picked up the save, his fourth of the season.