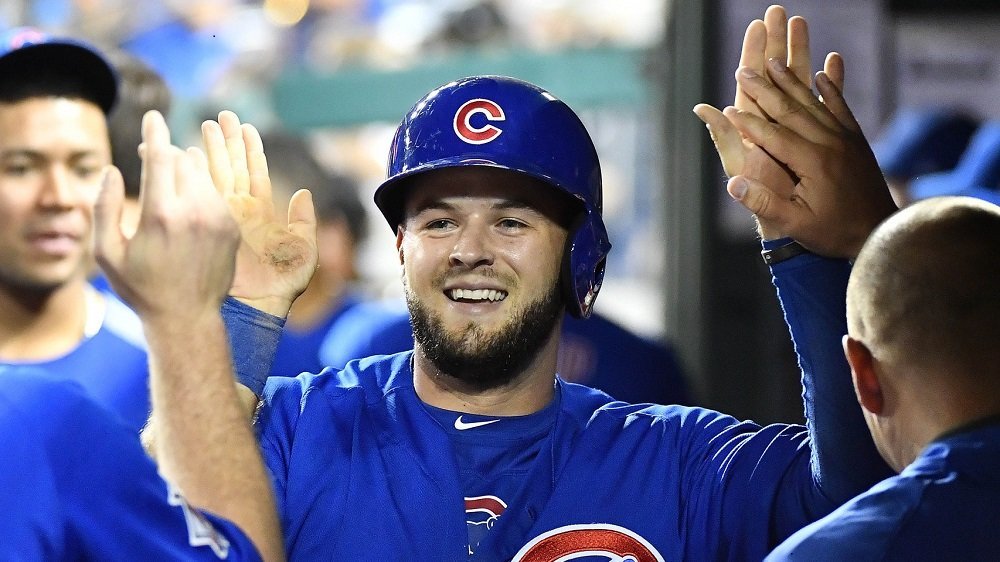 WASHINGTON, D.C. — Last month, Chicago Cubs infielder David Bote came up with the hit of a lifetime on a walk-off grand slam that beat the Washington Nationals. On Thursday night at Nationals Park, Bote produced yet another memorable hit against the Nationals that, although it did not hold the same weight as a walk-off grand slam, proved to be the winning hit for the Cubs.

After taking a 5-4 lead in the 10th inning of a hard-fought series opener versus the Nats on an RBI double by Bote, the Cubs went on to win 6-4 in 10 innings. The double by Bote, which was one of 11 hits tallied by the Cubs, was his lone hit of the game. Prior to that, the Cubs scored four runs in regulation, beginning with a two-run third inning.

In the top of the third, for the third time in four days, Cubs sensation Javier Baez scored from first base on a hit by Anthony Rizzo. A two-out double to right by Rizzo plated Baez, who motored around the basepaths to score with ease. Chicago garnered three consecutive two-out hits in the third to go up 2-0. The third such hit came on a single by veteran Ben Zobrist, who went 2-4 with two RBI on the evening, that scored Rizzo.

There goes that man again pic.twitter.com/Ge4NVnwO2T

Starting on the mound for the Cubs, Kyle Hendricks endured an up-and-down start. Hendricks struck out six in five innings of work but also gave up four runs on six hits. The Nationals pushed three runs across in the fourth frame to take a 3-2 lead. A rare error suffered by Baez resulted in Washington slugger Bryce Harper reaching base. Harper scored soon afterward on an RBI double by Anthony Rendon.

A few at-bats later, Nationals first baseman Mark Reynolds clubbed the 294th home run of his career, with the two-run shot putting Washington ahead of Chicago. The Cubs evened the score in the next inning, though, as they benefited from a Rendon error on a Rizzo single that put runners on second and third with one out. Zobrist followed that up with a sacrifice fly that scored Daniel Murphy. Playing against the Nationals for the first time since they shipped him to the Cubs a few weeks ago, Murphy went 1-5 with one run scored.

Nationals shortstop Trea Turner provided his club with a one-run edge in the bottom half of the fifth by attaining a two-out RBI single that brought in Spencer Kieboom. The Cubs were able to continue the back-and-forth nature of the game by tying the contest up at four runs apiece in the top of the eighth.

During the top of the eighth inning, Kris Bryant led off with a single and hustled to third base on an ensuing base knock off the bat of Albert Almora Jr., which also saw Almora reach second base on the throw from the outfield to third base. In the next at-bat, Willson Contreras smacked an RBI groundout to shortstop that scored Bryant.

Unfortunately for Chicago, Almora got caught in a jam on the grounder and was tagged out while attempting to make it back to second base safely. Chicago attempted to make up for it by inserting designated pinch runner Terrance Gore into the game to run for Contreras. Gore, who is remarkably fast, proceeded to steal second base, but he ended up being left stranded.

Washington experienced its own share of issues involving leaving runners stranded on base in the bottom of the eighth, as the Nats failed to score a run after placing men on second and third with one out. Entering the game to deal with the sticky situation, Cubs reliever Justin Wilson forced two critical outs to keep the game tied.

That paved the way for the Cubs to go up 6-4 in extra innings. Almora came through with a one-out double into the right-field corner, with Bote's game-winning double coming in the ensuing plate appearance. Adding an insurance run, September call-up Taylor Davis made the score 6-4 with a two-out single that enabled Bote to score.

David Bote has been known to do these things. #EverybodyIn pic.twitter.com/Ct6e1mGusc

With one last-ditch effort, the Nationals put together a decent scoring change by getting runners on the corners with one out in the bottom of the 10th. However, Cubs reliever Jesse Chavez, who pitched the whole inning, earned a strikeout and a lineout to end the game and secure Chicago's 6-4 victory over Washington.

Unlike the Nationals' bullpen, the Cubs' bullpen performed well in the face of adversity, which led to the Cubs (83-57) winning the opener of a four-game series at the Nationals (69-72). Cubs closer Pedro Strop, who went three up, three down in the ninth, picked up the winning decision to move to 5-1 overall, and Chavez obtained his third save of the season. On the other side, Nationals reliever Jimmy Cordero, who gave up the double to Bote, received the loss, making him 1-2 this year.