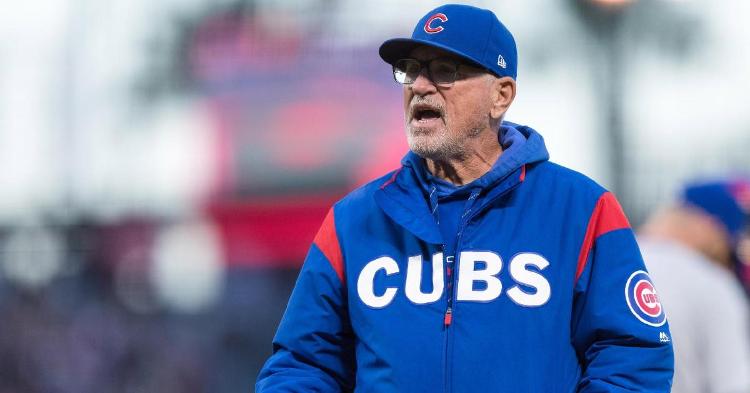 For as much as Joe Maddon has accomplished with the Cubs, Chicago’s back and forth performances, coupled with the fact that Maddon hasn’t been offered an extension, continue to lend doubt to the skipper’s future.

Maddon doesn’t seem worried about getting his extension, in fact, he’s optimistic about returning, but I can’t see it happening. Then again, I no longer guess as to who’d be a better choice for a replacement- especially with only six weeks left in the season.

Joe Maddon, 65, believes he can manage until he’s at least 70 and is “optimistic” he’ll be back with the Cubs. Says his fate not tied to wins and losses or else he’d already be re-signed. pic.twitter.com/cAVCuEZEu9

So much was made out of Maddon’s remarks, that MLB Trade Rumors wrote a short opinion piece on it, though they declined to predict his future. If there’s one thing I’ve learned about MLB TR, it’s that they generally don’t post something until they’re about 99.9% certain, so their neutrality seems to further cloud any hope of getting at least a peek at what’s going on with Joe, upper management and the players.

Is this Joe Maddon's last year with the #Cubs? https://t.co/rkrjXLlxcw pic.twitter.com/SvHyqcOxvg

As reported on the Bernstein and McKnight show on Tuesday, a source told Dan Bernstein that the Cubs are unhappy with Joe discussing his contract status publicly. The source claimed that “[The Cubs] are unhappy that Joe, himself, did not honor the handshake agreement…” not to discuss his contract publicly.

Much like with politics and everything else in life, there are always two sides to every story, and Theo Epstein almost immediately denounced the comment.

Whether Theo’s response to the report about the Cubs being angry with Maddon over his contract remarks were sincere, or whether they were an attempt to help clear some unwanted smoke, remains to be seen. Just my observation, but where there’s smoke, there’s generally fire, and I doubt very seriously that Dan Bernstein would report this if it had no backbone.

"Totally baseless. We had no problems with Joe's comments. He has to talk to you guys twice a day and does a great job with it."

Although both sides have remained relatively tight-lipped about the situation, there’s obviously some tension building. Rumors have been circulating for well over nine months now, and there will undoubtedly be a definitive answer within the next couple of months. I will say one thing- this is one of the most perplexing things I’ve ever seen in my life. Not that I don’t think that a change in managers would quite possibly suit the team well, but who in their right mind let goes a manager of a first-place team? Yet, the situation exists.

Joe’s carefree management style is something that worked fantastically and miraculously from 2015-2017, but the team has now seemingly outgrown it.

It’s time to fire Maddon. He has clearly lost this team. They are soft and haven’t responded to him the last two years. It’s time to bring in a fiery manager like Girardi. It’s time to trade some of these guys too.

In some ways, I couldn’t have phrased the above tweet any better myself, although I’m not sure that Joe Girardi is the right choice. I agree that Maddon has somehow lost the team at times, as they seem to be some inexplicable disconnect going on. I don’t think for a minute that the players are planning a mutiny, but rather that Joe and the team no longer mesh in terms of Joe’s philosophies and strategies being turned into productiveness. No matter which players Theo Epstein plugs into the roster, things always seem to improve briefly, but then revert back.

After conquering MLB in 2016, the Cubs fell short of a second World Series bid in 2017, losing to the Dodgers in the NLCS. Last year, it came down to a wildcard game with Colorado, after the Cubs were forced to play Game-163 with Milwaukee. This year? Well, they’re currently on pace to win a total of 87 games which certainly doesn’t sound like a championship-caliber team, yet they now enjoy a small lead over Milwaukee and St. Louis.

How does a club with this much talent, struggle so badly? Sure, injuries have taken a toll, but no worse than what any other team is going through, and certainly not as bad as some. They’ve changed hitting coaches, pitching coaches, players and hot dog vendors, but they’ve been unable to establish their dominance for almost two years now- which is why I continue to maintain that this is a managerial issue.

I don’t dislike Joe Maddon, though I do think some of his decisions as an MLB manager are questionable at times. If the Cubs were performing to within a reasonable margin of what they did in 2016, I’d say sign Maddon to at least a two-year deal at this point, but they’re not. I don’t give a damn what the standings reflect. This team is not strong enough to fight their way through a divisional series, a championship series and much less a World Series at this point- if for no other reason than their road record.

Should the Cubs win the division (or, God-forbid, have to enter October as a wildcard team), they would not have the home-field advantage. While I firmly believe they could win every playoff game at Wrigley, I can’t see them beating the Braves- and ultimately the Dodgers- with a higher number of games being played as the visiting team. I’m sorry, the numbers speak for themselves, and this is not a team who has been able to win with any bit of consistency on the road.

As a manager, Joe can only do so much- I’ll concede that, but 29 other teams in MLB also suffer bumps and slumps, but they generally find some consistency. The Cubs have way too much talent to be so unpredictable, and when a manager as experienced as Joe Maddon can no longer extrude that talent, something needs to change.

At this point, the issue now goes far beyond whatever the ultimate outcome will be. I wish somebody would say something definitive, so we can all get on with life.