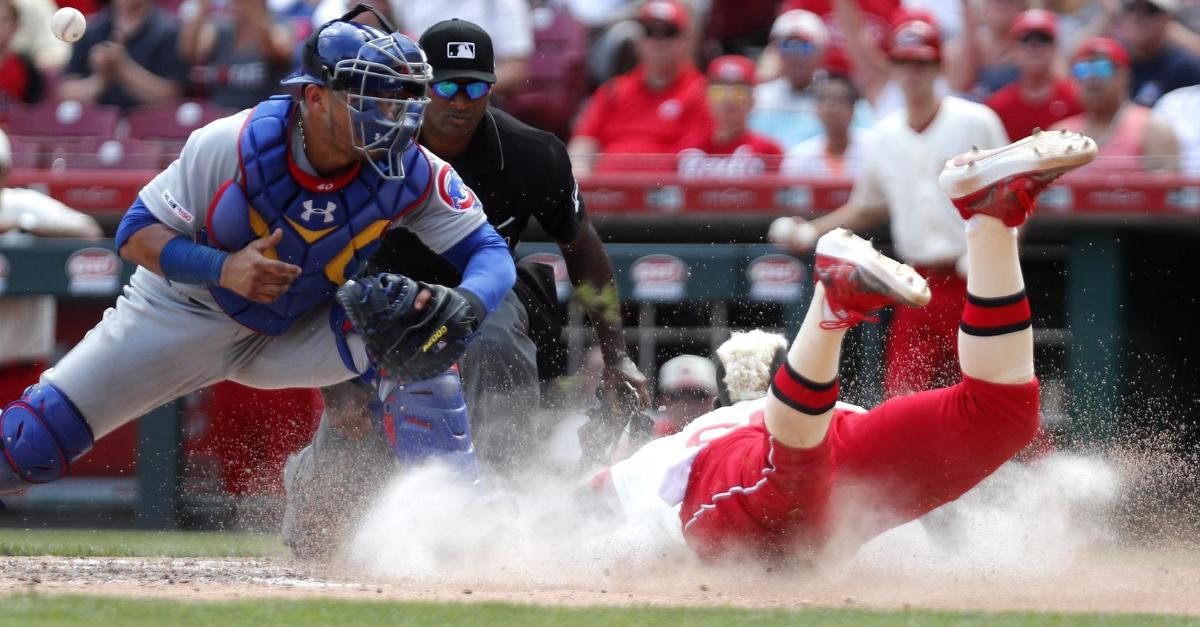 Cubs catcher Willson Contreras was at the center of a controversial ruling surrounding a groundout. (Credit: David Kohl-USA TODAY Sports)

CINCINNATI — In a game that featured a little bit of everything, the Chicago Cubs (45-39) came up short against the Cincinnati Reds (38-43) in the finale of the 3-game weekend series at Great American Ball Park. Despite pounding out 11 hits, including two home runs, on Sunday, the Cubs saw their offense overshadowed by a couple of controversial calls that did not go their way. Overall, the Cubs went 2-for-12 with runners in scoring position and left nine stranded, thereby benefiting the Reds, who went 5-for-9 with runners in scoring position and won by a final score of 8-6.

Cubs starting pitcher Jon Lester found himself in an early 3-0 hole, as Reds slugger Eugenio Suarez jacked a 3-run bomb in the bottom of the first. In the bottom of the third, the Cubs had an opportunity to cut into the Reds' lead when they advanced men to second and third with two outs. However, a controversial ruling of fan interference resulted in Cubs first baseman Anthony Rizzo being called out to end the inning. Rizzo hit a foul ball down the left-field side that a Reds fan reached over the partition and attempted to catch. However, Reds left fielder Phillip Ervin was also attempting to make the catch, and, following a replay review, the umpires called Rizzo out due to fan interference, which left Rizzo and Cubs manager Joe Maddon beside themselves.

Later, in the top of the sixth, the Cubs sported runners on second and third with two outs yet again, but David Bote struck out swinging to end the scoring threat. Lester had his start ended in the bottom of the sixth, as Ervin hit a 2-out bloop single to right that scored Yasiel Puig from second. Earning the loss, Lester gave up four runs on five hits and two walks while striking out eight in 5 2/3 innings pitched. As for Reds starter Anthony DeSclafani, he pitched six scoreless innings, in which he fanned seven, and picked up the win for his efforts.

The Cubs finally put runs on the scoreboard with Reds reliever Michael Lorenzen pitching in the top of the seventh. Addison Russell led off with a double and was scored on an RBI single from Albert Almora Jr. After that, Kyle Schwarber blasted his 18th home run of the year on a 2-run shot to left. The 369-footer pulled the Cubs to within a run of the Reds, but the inning ended in a controversial fashion that prevented the Cubs from potentially tying the game or taking the lead. With Kris Bryant on third with two outs, Cubs catcher Willson Contreras grounded out to end the inning. However, Contreras seemed to think that he fouled the ball off his foot, as he did not even run the ground ball out, but, even after the umpires conferred, the inning-ending call stood.

For the third time on the afternoon, the Cubs concluded an inning with runners left stranded at second and third when Almora fouled out to the catcher to wrap up the top of the eighth. A 2-run rally by the Reds in the bottom of the eighth essentially thwarted the Cubs' comeback attempt. The Reds scored four runs with two outs in the eighth to take a commanding 8-3 lead. Once again, Ervin plated Puig from second on a bloop single to right. Kyle Farmer then scored Ervin on an RBI base knock, and Nick Senzel capped off the scoring barrage with a 2-run single. Sporting throwback uniforms, the Reds collected nine hits and four walks as part of a solid day at the dish.

Look at this stupid run. pic.twitter.com/IeC1NupAPo

Ending June quite fittingly, Cubs right fielder Jason Heyward, who was the Cubs' most well-rounded hitter in the month of June, lined a 3-run homer in the top of the ninth. On an 0-2 count, with the Cubs down to their final out, Heyward drilled a 355-footer out to right to make the score 8-6. Heyward also robbed the Reds of a home run with a leaping catch at the wall in the bottom of the seventh that prevented Senzel from going yard. The 3-run jack proved to be practically meaningless, though, as Javier Baez popped out to end the game three pitches later. With Sunday's 8-6 loss factored in, the Cubs went 14-15 over the course of June for their first losing month since May of 2017. Furthermore, the North Siders, who dropped two of three to the Reds, have now lost five road series in a row.