The Cubs have a ton of things to accomplish this series, the least of which is hanging onto first place. Look for my series preview later today, for a full breakdown.

Cubs scout Villar: According to reports, Chicago has scouted Jonathan Villar and has gone so far as to have discussions with Baltimore about a deal. The reports also say that a trade is unlikely at this point. Villar (or a guy like him- or like Eric Sogard, who the Cubs also took a shot at getting) could prove valuable, as Villar also plays shortstop and would serve as a backup/alternate to Javier Baez. Villar is still young (28), making him attractive, but he has a mediocre slash line of .262/.324/.421.

This is truly a seller’s market at this point, so the cost for any addition- at least any worthwhile addition, isn’t going to come cheap. Much like last winter, the Cubs continue to miss out on their trade targets, and time is winding down.

Ian Happ: I’ll give Happ credit for one thing that has become blatantly obvious- he’s gained extraordinary patience at the plate. Although he’s still looking for a hit (now 0-7 with three strikeouts), he has drawn a total of four walks (OBP .364), and his teammates have parlayed those into three runs. He was promoted based on his offensive numbers with Iowa, something he has yet to show in Chicago, but I guess I can’t say that he isn’t contributing.

Strop’s struggles: According to Cubs’ pitching coach, Tommy Hottovy, part of Pedro Strop’s issue, is that he’s trying to manufacture power to compensate for lost velocity. Hottovy says that once you get the upper body working out of sync with the rest of your body, you start asking for trouble “nine out of ten times.”

NLC Trade: Nope. Not the Cubs, but the Brewers did acquire RHP Jordan Lyles from the Pirates, in exchange for RHP (prospect) Cody Ponce. Milwaukee is dealing with some serious shortages in the starting pitcher department, and this is their first step in filling the voids. Good news: The Cubs have clobbered Lyles at times. Bad News: Lyles tends to strike out a lot of guys.

Milwaukee may not be done yet, either. Reports say they are heavily engaged with the Arizona Diamondbacks for LHP Robbie Ray. This is precisely the kind of strategy that helped them win the division last year; they recognized weaknesses, then actually went out and filled the holes.

Also on the move, the Cardinals acquired LHP Zac Rosscup from the Dodgers, in exchange for cash.

We have acquired LHP Zac Rosscup from the Dodgers in exchange for cash considerations.

Rosscup, 31, is 2-0 with a 5.00 ERA in 28 games this season between Seattle, Toronto, and Los Angeles. He will be assigned to the Memphis (AAA) roster. pic.twitter.com/LoveFWhIdE

The anticlimactic hot stove: I wrote a commentary on this last night, but to say the least, this summer’s trading season has been a letdown- not just from the Cubs’ standpoint, but for all of MLB. Look for my article later today, but in the interim, here’s some of what’s flashing across the wire…

D-Backs, who just fell below .500, could have great sale. Ray, Dyson, Ahmed, Peralta, Chafin, Bradley, Jones are among candidates to go. Greinke’s drawn some interest, but with wisely selected 15-team no-trade list, it’s said to be up to him, “for the most part.”

Cubs History: On this date in 2014, the Cubs inserted catcher, John Baker, into the pitching slot. Pedro Strop should be so effective lately…

On this date in 2014, @manbearwolf earned the highest honor a position player pitching can achieve.

They’ll win this one because they usually get 1 of 3 on the road.

Baseball Quotes: “My pitching philosophy is simple. I believe in getting the ball over the plate and not walking a lot of men.” -Bob Gibson

I never could stand losing. Second place didn't interest me. I had a fire in my belly. -Ty Cobb pic.twitter.com/EjCIbZoHV1 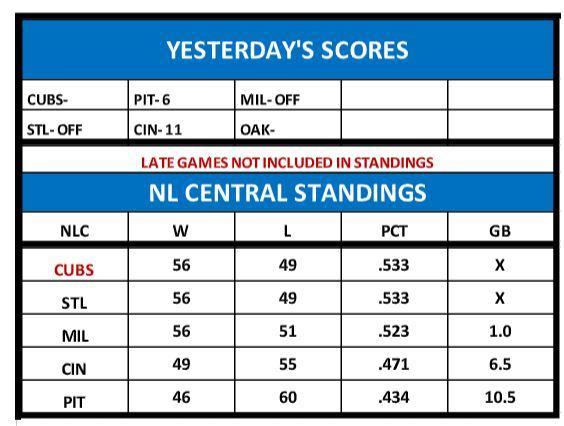