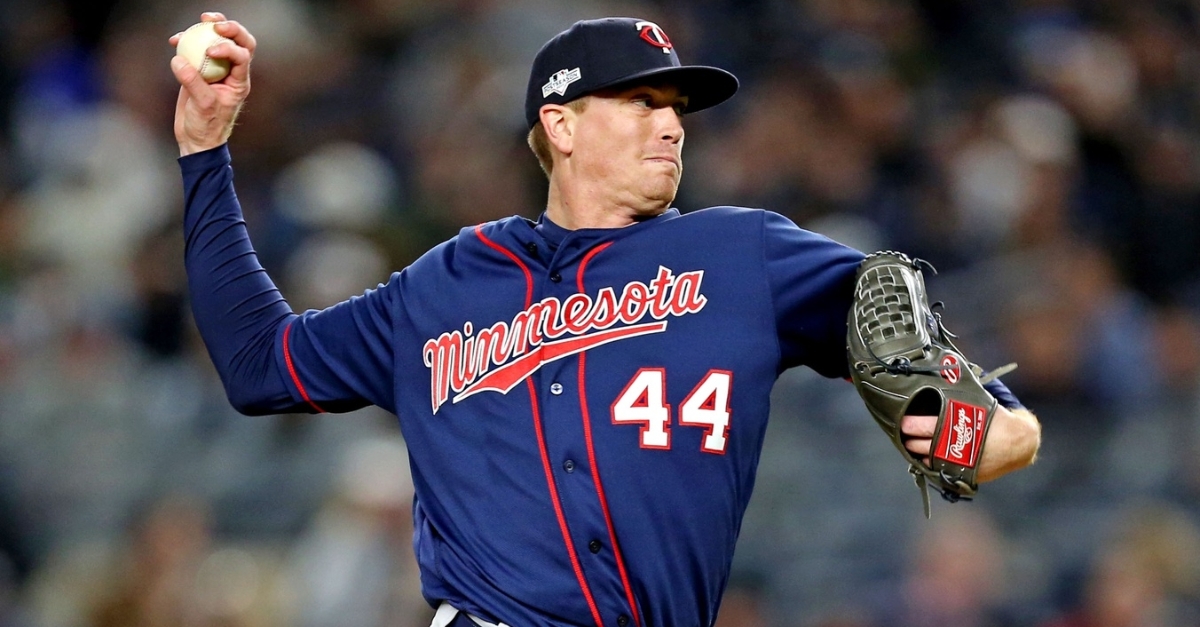 According to MLB Trade Rumors as of today:

MLBTR is now projecting that Kyle Gibson will go to the Cubs; Two years, $18MM. Gibson was drafted 22nd overall by the Twins out of Mizzou in 2009 after he dropped down draft boards due to a stress fracture in his forearm. At the time, Gibson was considered a possible future ace on the fast track to Minnesota. However, the righty went under the knife for Tommy John surgery in September 2011, delaying his big-league debut until 2013. He was 25 years old by then, which is why he’s reaching free agency heading into his age-32 season. Gibson’s injury history also included a shoulder strain in 2016.

Now this sounds a little more promising… Will Harris to the Cubs on a two-year/18MM deal. Harris, 35, might be the best MLB reliever you’ve barely heard of, at least until the playoffs this year. Since joining the Astros via a November 2014 waiver claim, Harris has posted 297 innings of 2.36 ERA ball. That mark ranks third in MLB over that time — ahead of Kenley Jansen, Craig Kimbrel, and various other well-compensated firemen. As a righty with a 92 mile per hour fastball and only 20 career saves, perhaps Harris’ anonymity makes sense. But Harris is a spin rate monster who specializes in weak contact. He’s got an excellent ground-ball rate and should be a popular free agent this winter even after allowing a pair of critical World Series homers.

Despite his age, I do like this idea, especially with the Cubs possibly losing Pedro Strop, Steve Cishek and possibly Brandon Kintzler to free agency. Harris is a wicked setup man, and if Craig Kimbrel can get fine-tuned over this winter, they could become a lethal pair.

Ross’ staff: Ex-Padres manager, Andy Green, is currently being considered – along with Mark Loretta and others – to serve as David Ross’ bench coach. While it was rumored that John Farrell may get a spot with the Cubs and Ross, those rumors have since been dispelled.

Told former managers are a high priority for David Ross and the Cubs choosing the next bench coach . Good names to consider are John Farrell - Andy Green and Fredi Gonzalez .

Except, from what I’ve been reading in “The Athletic,” Farrell is out. Hmm.

Darvish with the hat trick: Pitching Ninja has decided that our very own Yu Darvish is this year’s winner for the “Deadliest Pitch Award.” Darvish not only took out the batter but collected Willson Contreras and the home plate umpire in the process. Yu did, however, accept responsibility, as he tweeted, “My bad.”

Cubs’ Marquee Network: Thus far, the Marquee Network will be available on AT&T and DirecTV, although future announcements regarding other viewing platforms are expected to be made. YouTube TV (which, ironically, I actually just switched to today, now that I’ve learned PS Vue is going bust) is also slated to be one of the formats offering the network.

According to a Cubs’ Press Release, the Marquee Network has now officially announced Michael Santini as senior vice president of programming and production.

“Maybe it’s working on their craft away from the cameras, wherever that may be. That’s a lot of the access. We’re looking forward to working with the players and seeing the things that they’re doing and seeing how often we can go along with them and show people what their lives are like. Sometimes, the most interesting stuff has nothing to do with baseball.” -Michael Santini

Len Kasper and Jim Deshaies will be staying on board as the Cubs’ network marches forward. Industry sources have identified MLB Network personalities Ryan Dempster, Mark DeRosa, and Dan Plesac as logical fits somewhere on Marquee’s programming, and Doug Glanville may find himself employed there as well.

This is absolutely incredible footage of Mickey Mantle.

One can always count on Tim Dillard for a little comic relief.

The Boras Bunch: There are currently 154 free agents on the market (with more likely to surface), and Scott Boras only represents a handful of the more prominent names (Nick Castellanos, Anthony Rendon, Gerrit Cole, Stephen Strasburg, Hyun-Jin Ryu, Dallas Keuchel and Mike Moustakas. Still, that puts Boras at just under 13% of the market share, although his percentage is going to make a hell of a lot more than the other 87.04%.

The Hot Stove boiled over yesterday, then as expected, quieted down today.

Cardinals: After issuing a qualifying offer, the Cards are now set to start discussing a multi-year deal with OF Marcell Ozuna. Having issued the QO, they’ve now bought a little time to iron out a deal to keep him in St. Louis. The Cards are also focusing on keeping Adam Wainwright in the house, as they continue working on negotiating a new deal with him.

Astros: The Astros say they will take a shot at retaining Gerrit Cole. After Cole’s remarks about not being an employee of the team, you’d think they’d pass, but this shows you just how good he is.

Braves: Much like the Astros, Atlanta says that they’re hoping to be able to retain Julio Teheran this winter.

Giants: SF has claimed several players off waivers: (1) RHP Rico Garcia from Colorado. (2) Infielder Kean Wong from the Angels and (3) RHP Trevor Oaks from the Royals. To open space on for the trio of new additions, San Francisco designated outfielder Mike Gerber and right-hander Ricardo Pinto for assignment.