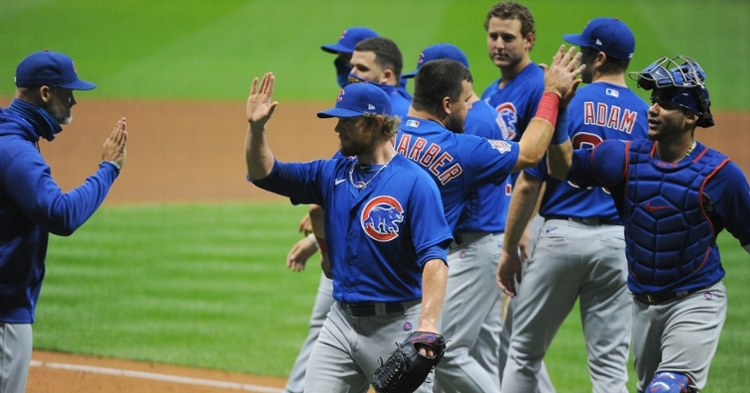 The Cubs are coming off a come-from-behind 4-2 victory over the Crew last night, following a 1-0 loss to Milwaukee on Friday.

Sounds like an odd dedication, but as CubsHQ's Cole Little wrote in an article last night:

"In his postgame press conference, Heyward revealed that Freeman inspired him to go yard on the evening, as Freeman celebrated his 31st birthday on Saturday.

"Freeman promised Heyward that he homer on Heyward's birthday, which was Aug. 9, and he did, so Heyward made a promise to himself that he would hit a dinger on Freeman's birthday, which he did. Heyward told reporters that he planned on texting Freeman to effectively dedicate the three-run round-tripper to his birthday, making for an awesome moment shared between former teammates."

This year, I didn't even bother filling out my wish list for a speed demon, but was happy with the acquisition of Cameron Maybin, even if it came at the cost of shortstop prospect Zach Short. Now? They've signed Billy Hamilton.

Speed is obviously what the Cubs went after, as Hamilton is batting all of .045/.083/.045 this season (all with the Mets). He's had no official at-bat with the Cubs this season, though he has been thrown out while attempting to steal just one base as a pinch-runner. Surprisingly enough, to make room for Hamilton's arrival, the Cubs optioned newly acquired outfielder Jose Martinez to the alternate site in South Bend, Indiana.

Playoffs drawing closer: Despite the insanely high winning record to start the season, I never thought he Cubs would see October, based solely on the bullpen's weakness, which has now somehow become one of their strengths. There are still hurdles to overcome, though. The rotation has had some spotty – and in some cases, shoddy – performances, and the hitting has cooled way down again.

Making things even more complicated is that 67% of the games this season are played against division rivals, meaning that unless one team goes on a winning rampage while the others lose consistently, it's going to be hard to make up any ground. The Cubs have caught a couple of lucky breaks lately, allowing them to build their lead over St. Louis to 3.0 games while distancing themselves from Milwaukee by 5.0 game lead.

The entire NL Central is averaging .500 ball over their last ten games. The Cubs, Brewers, and Reds have all gone 5-5, and although the Cards have managed a 6-4 record, that average is weighted down by the Pirates 4-6 record over their last 10.

October will be no easy obstacle to overcome this season. Yes, Chicago has compiled an excellent record of 27-20 (.574), but the Cardinals are knocking on the door, and despite being behind by 3.0 games, they also have eight games in hand with which to make up ground. In the west, the Dodgers are insanely hot (32-14), with the second-place Padres sitting at 29-17. In the east, first-place Atlanta poses a threat (27-19), as do the Phillies who are 2.5 games out with a record of 23-20.

The American League presents its own set of problems, the biggest of which may be the White Sox, who've now compiled a record of 29-16 while building a 1.0 game lead over the Twins (29-18). Cleveland is still in the mix, Oakland looked insanely good, and the Rays (30-16) have a commanding 4.5 game lead over Toronto (25-20).

I always hope for the best for the Chicago Cubs, but when asked for an off the cuff World Series prediction the other day, i picked Oakland over the Dodgers in six games without hesitation.

Oops, there it is: With Anthony Rizzo getting a night off last night, Kris Bryant filled in at first base; Bryant also filled in part of the front row at Miller Park while attempting to grab a pop foul off the bat of Ryan Braun. The tumble into the stands didn't appear to hurt KB, but the result of missing the pop-up certainly did, as Braun delivered a two-run blast on the next pitch.

Not to be outdone, Brewers starter Brent Suter had some acrobatic maneuvers of his on. Did you ever see what happens when a cleat gets hung up on the pitching rubber? For the record, the Olympic Committee judges scored this 8.5, 9.1, 8.9.

Baseball Quotes: “You are what you repeatedly do. Then excellence is not an act, it's a habit." -Francisco Lindor

You know, catching the knuckleball, it's like trying to catch a fly with a chopstick. -