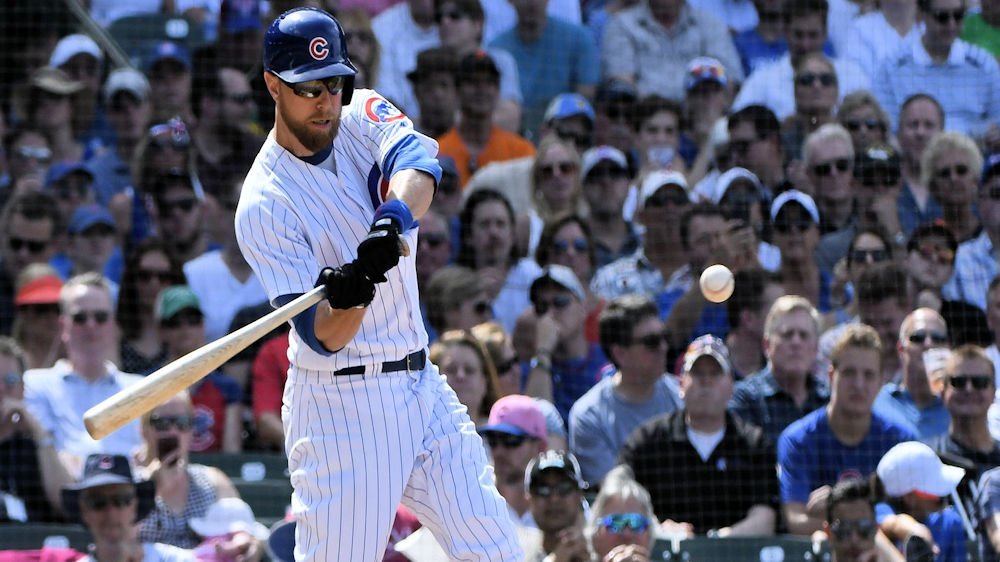 Ben Zobrist put the Cubs ahead for good with a clutch two-run double in the seventh. (Photo Credit: Matt Marton-USA TODAY Sports)

CHICAGO — After suffering through a dreadful two-game set against the Cleveland Indians earlier this week, the Chicago Cubs, who had scored just one run total in their previous two games, awoke from their offensive slumber with a four-run seventh inning that led to a 6-2 win over the San Francisco Giants at the Friendly Confines.

A fast-paced pitching battle dominated the early and middle innings, with Cubs starter Kyle Hendricks and Giants starter Derek Holland going tit for tat in a speedy game that reached the seventh-inning stretch in approximately an hour and 45 minutes. Holland suffered from one bad inning, though. Getting charged for two of the Cubs' four runs in the seventh, Holland finished with five hits, two earned runs and two walks in a losing effort. Holland dropped to 2-6 with the loss.

Despite the pitch duel consuming most of the contest, the Cubs came out firing at the plate in the first inning. Outfielders Ben Zobrist and Albert Almora, Jr., hit back-to-back singles to start the game, and, after a passed ball moved them to second and third, first baseman Anthony Rizzo plated Zobrist on an RBI single to left-center. Rizzo now has 31 RBI on the year.

The Cubs were unable to score any additional runs in the opening frame. Chicago wasted a few decent scoring chances in the ensuing innings, leaving six runners stranded prior to the four-run seventh. Luckily for the Cubs, Hendricks put together perhaps his best start of the year, striking out seven and giving up just one run in seven innings pitched.

San Francisco leadoff man Gorkys Hernandez was the Giants' lone source of offense for the majority of the ballgame, tallying a solo home run off Hendricks in the fourth and later collecting a single in the sixth. Those two hits proved to be the only ones given up by Hendricks on the afternoon. In fact, prior Hernandez's single in the sixth, Hendricks entirely avoided having to pitch from the stretch.

Holland was great for the majority of his start, before an HBP of the Cubs' Javier Baez led to his downfall. After hitting Baez to start the bottom half of the seventh, Holland seemed to lose his command. Baez picked up his second steal, which was followed up by a walk of Ian Happ on the next pitch. This led to a pitching change, but Giants reliver Will Smith fared no better on the mound.

After a perfect sacrifice bunt from Addison Russell put runners on second and third for the Cubs, a pinch-hit walk by Tommy La Stella, who hit for Hendricks, loaded the bases. Next, Zobrist blew the game wide open for Chicago on a two-run double to left. Zobrist went 2-4 with two RBI and two runs scored.

Zobrist's second run of the day came a few at-bats after his double, when third baseman Kris Bryant smacked a two-out single to shallow center off Giants reliever Cory Gearrin, which scored La Stella and Zobrist with ease to put the Cubs up 5-1. The Cubs added an insurance run in the eighth off Giants reliever Hunter Strickland. Happ drew a one-out walk and proceeded to collect his third steal of the year. He then scored on an RBI single to center off the bat off Russell.

San Francisco added a meangingless run of its own in the top of the ninth off Cubs reliver Pedro Strop, as third baseman Evan Longoria brought home first baseman Brandon Belt on an RBI single to right. The Giants chased Strop from the game and put together a respectable late run, but their deficit proved too sizable to overcome, though, and the Cubs notched a 6-2 victory.

Cubs closer Brandon Morrow, who entered with two outs in the ninth and men on first and second, struck the Giants' Mac Williamson out swinging to end the game and earn his 11th save of the season. In Friday's win, the Cubs righted the ship offensively, benefiting from the dominance of Hendricks, as well. Hendricks picked up the win to become 4-3 overall, while the Cubs moved to 26-21 overall. The Giants, who were limited to just four hits in the game, dropped to 24-27.