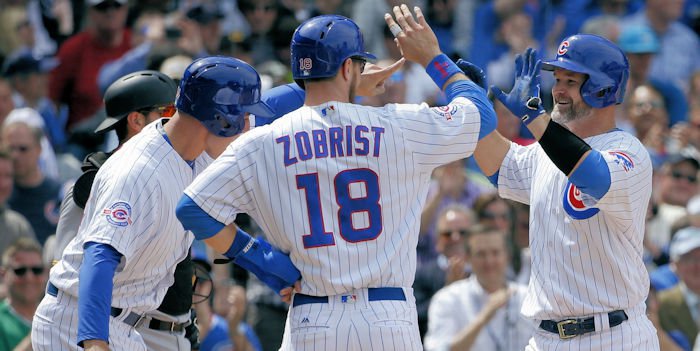 After suffering through their first back-to-back losing streak of the season earlier this week, the Chicago Cubs (26-8) returned to their winning ways on Friday afternoon, dominating the divisional rival Pittsburgh Pirates (18-16) by a final score of 9-4.

Cubs starter Jason Hammel pitched 6.2 innings and, other than a virtually meaningless two-run top of the sixth that occurred when Chicago was already leading 8-0, Hammel was magnificent on the afternoon, moving to 5-0 this year.

Scoring the bulk of their runs in two consecutive innings, the Cubs were deadly swinging the bat on the afternoon. Veteran catcher David Ross had, arguably, his best outing of the season thus far, going 3-4 with 3 RBI and two runs. His three-run home run in the bottom of the fifth put the game practically out of reach for the Pirates.

Eight of the Cubs’ nine runs on Friday were scored via the long ball. Shortstop Addison Russell had his lone hit of the game in the bottom of the fourth, crushing one over the ivy in left field to score three. Prior to Ross’ moonshot, left fielder Kris Bryant hit a home run in the bottom of the fifth that scored two runs. Like Russell, that was Bryant’s only hit of the game.

Pirates ace Francisco Liriano was shellacked in Friday’s outing, giving up the Cubs’ first eight runs before finally being pulled. Though both teams finished with 11 hits, the plethora of home runs vaulted the Cubs to victory and dropped Liriano to 3-2 on the season. Liriano’s ERA took a blow, as well, rising to an ugly 4.99.

Cubs reliever Trevor Cahill pitched the game’s final two innings, giving up two runs in the top of the ninth, but Chicago’s sluggers gave their relief pitchers a lot of breathing room with their spectacular hitting on the afternoon.

The lone Pirate to put together a solid showing at the plate in the first game of the three-game series was center fielder Andrew McCutchen, who went 3-5 with two RBI. An offensive affair that was definitely tilted in the Cubs’ favor, even Hammel got in on the action, reaching base via a fourth inning single.

Ross was the star of the game, with an errant throw on an attempt at throwing out a base-stealer that allowed a run to score serving as his only mistake. Other than that, the clubhouse favorite who will retire at the end of the season was phenomenal. Incredibly enough, despite the Cubs scoring 9 runs on the afternoon, Ross was the only Chicago batter to accrue more than one hit, and, again, he had three of them.

Jake Arrieta, another undefeated Cubs starter, will take the mound tomorrow afternoon when he duels the Pirates’ Jeff Locke, who is 1-2 this year. Arrieta will look to become the National League’s first seven-game winner, and the Cubs’ batters will look to pick up right where they left off.