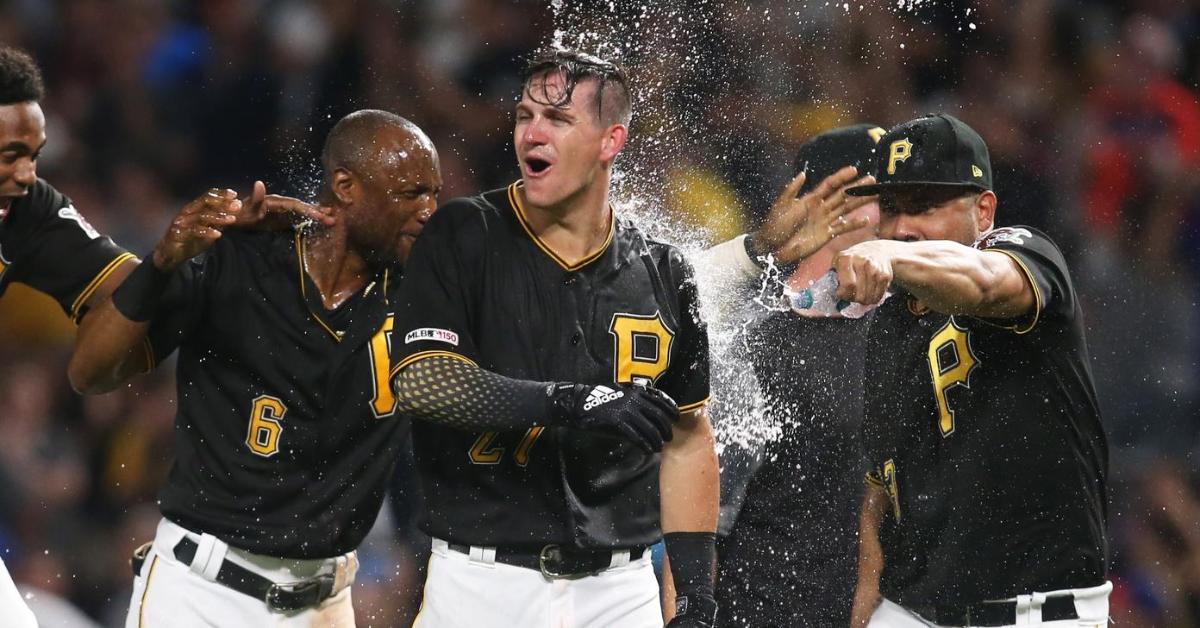 A 2-out RBI single hit by Kevin Newman in the bottom of the ninth resulted in the Cubs' second consecutive walkoff defeat. (Credit: Charles LeClaire-USA TODAY Sports)

PITTSBURGH — For the second night in a row, a ninth-inning bullpen implosion doomed the Chicago Cubs (64-58), as they dropped to 0-4 on their current stay in the state of Pennsylvania. After getting swept by the Philadelphia Phillies (64-58) in a 3-game set at Citizens Bank Park, the Cubs dropped the opener of their 3-game series versus the Pittsburgh Pirates (51-70) on Friday. The 3-2 contest at PNC Park did not feature much offense, with the Pirates plating two runs in the bottom of the ninth and winning in walkoff fashion.

Four of the contest's five runs were scored in the final two frames, overshadowing a pitching duel between the two starters that highlighted the majority of the matchup. Cubs hurler Kyle Hendricks battled Pirates hurler Joe Musgrove, with Hendricks giving up just one run on three hits and one walk in seven innings pitched. Musgrove lasted 7 1/3 innings on the bump, in which he struck out nine, and was removed right before a 2-run triple was hit. As a result, Musgrove was charged with two runs on four hits and zero walks.

Outside of a couple of singles, there was practically no offense to speak of through the first 3 1/2 innings of play. In the bottom of the fourth, Colin Moran hit an RBI single off Hendricks that put the Pirates on the scoreboard. Starling Marte, who singled and stole second earlier in the inning, scored on the play. The Cubs proceeded to waste a leadoff double from Javier Baez in the next inning but prevented the Pirates from manufacturing runs with several defensive highlights, including two impressive double plays, in the sixth and seventh innings.

I take this magnetic force-of-a-man to be my glover. pic.twitter.com/3mbm4b67hm

Back-to-back singles from Jonathan Lucroy and Ian Happ, who entered as a pinch hitter, in the top of the eighth chased Musgrove from the game and led to the Cubs taking the lead. All-Star Pirates reliever Felipe Vazquez then toed the rubber, and Tony Kemp accomplished what left-handed batters seldomly accomplish against Vazquez by collecting an extra-base hit. With a 2-run triple smacked into the gap between right and center, Kemp plated both baserunners and gifted the Cubs with a 2-1 lead. A walk ensued, but Vazquez forced an inning-ending double play after that to escape the jam.

On Thursday, the Phillies scored six runs in the bottom of the ninth and ultimately won 7-5 via a walkoff grand slam. History repeated itself on a much less grandiose scale on Friday, with the Pirates using small ball and walks to push two runs across and win on a walkoff single. Kyle Ryan began the inning on the mound for the Cubs and was pulled after giving up an infield single with one out. The chopper skirted underneath the glove of Cubs third baseman David Bote, who similarly botched a 1-out chopper on Thursday. Bote was not charged with an error, as it was a tough play to make, but an out potentially could have been recorded if Bote had fielded the ball.

Fresh off the injured list, Cubs reliever Brandon Kintzler was then brought into the game. Kintzler rarely pitches with a save on the line, and he did not fare well in the tense situation. The Pirates did an excellent job of putting together hard-fought at-bats against Kintzler, as they displayed patience at the plate that paid off. Following a nubber from Marte that Kintzler corralled and threw to first base for the second out, Cubs manager Joe Maddon opted to intentionally walk Pirates slugger Josh Bell. That decision did not pay dividends for the North Siders, with Kintzler walking two consecutive batters thereafter.

The second such walk came on a full count and forced a run home, thereby tying the game at 2-2. Rookie Cole Tucker drew the RBI walk in his first plate appearance since being called up from the minors earlier in the day. Kevin Newman next dug in at the plate, and he, too, worked a full count against Kintzler. Although Kintzler avoided walking Newman, he gave up an equally costly single, as Newman's shot up the middle plated the winning run. With the 3-2 loss in the books, the Cubs fell to 2-6 through eight installments of their 10-game road trip.

Kevin Newman hits a single to walk off the Cubs #pirates pic.twitter.com/lcOtgcHEJx