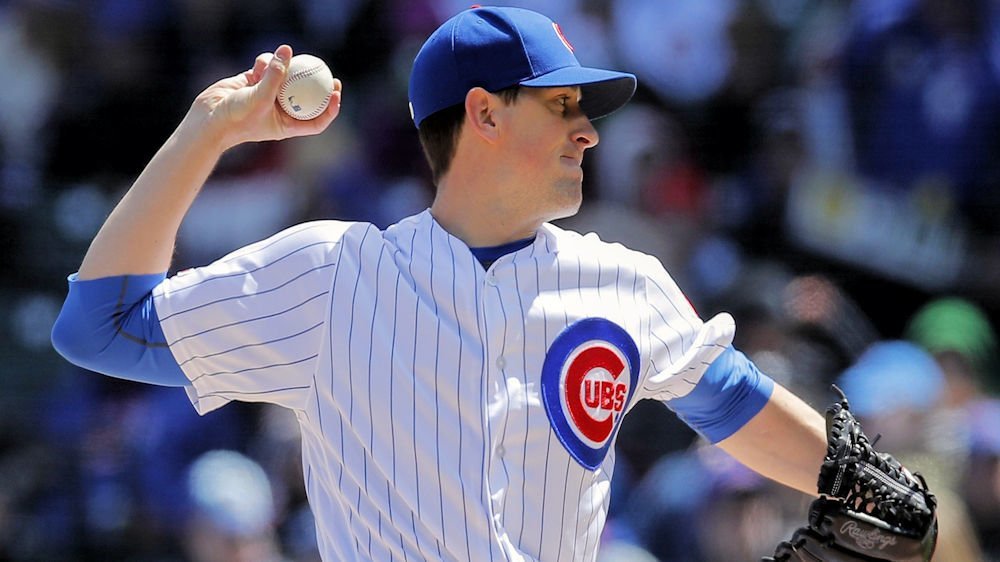 While pitching remains a problematic area in Chicago, there’s hardly anything wrong with the power that the Cubs exhibit at the plate. As I calculated the stats and rankings this week, I wasn’t sure which would change more radically- the offense due to a power surge, or the pitching, due to slumps.

The Cubs seem to have no problem hitting the long-ball, as their 87 team homers are good enough for second in the NL, but in the wake of the increased power, situational hitting continues to suffer, as do RBI, as men continue to be stranded throughout every game. Once averaging 5.66 runs per game (a little over a month ago), the Cubs are now just netting 4.55 runs per game, which has caused them to see a drastic decline in run differential. Although they’re still at a +50 (best in the NLC and second in the NL), the Cubs have fallen further and further behind in that race, as Los Angeles now boasts a run differential of +85, while the Twins are at +103. 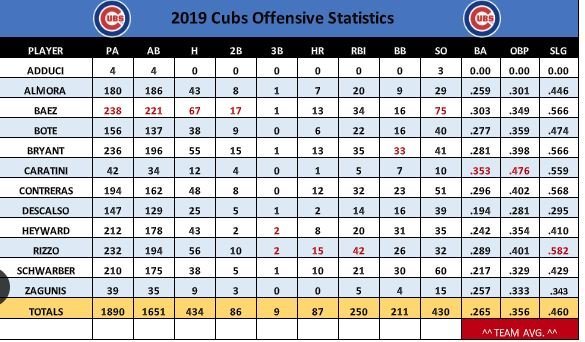 Javier Baez continues to lead the team in plate appearances, at-bats, hits (67), doubles (17) and strikeouts (75), while Kris Bryant has walked his way to an OBP of .398 (33 walks). Anthony Rizzo is leading the team in power with his two triples, 15 homers, and 42 RBI, and his .582 slugging percentage continues to grow.

Victor Caratini’s .353 average and .476 OBP are still tops in the clubhouse, and it’s refreshing to see that he hasn’t lost his stroke after returning from the IL. 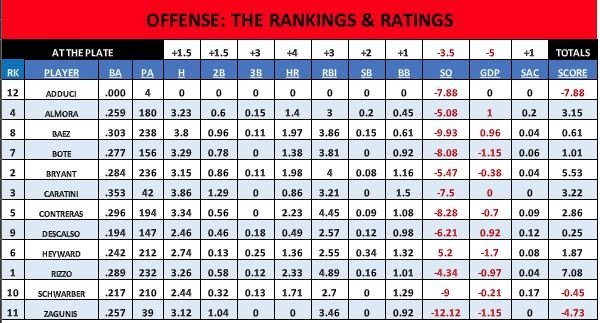 There was a ton of shuffling in the offensive ratings this time around. Although Bryzzo remained #s 1 and 2, Albert Almora Jr. jumped from #4-7, while Javier Baez fell from #4 to #8 and Jason Heyward also fell a total of three spots to #6. For obvious (and unfortunate) reasons, Ben Zobrist was not rated. 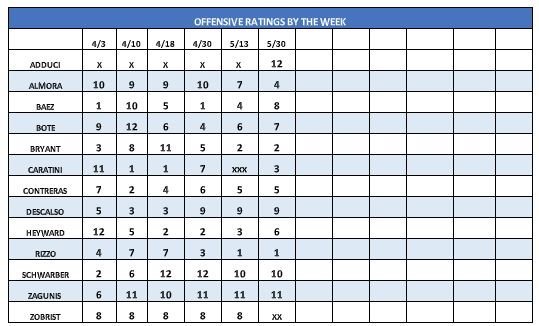 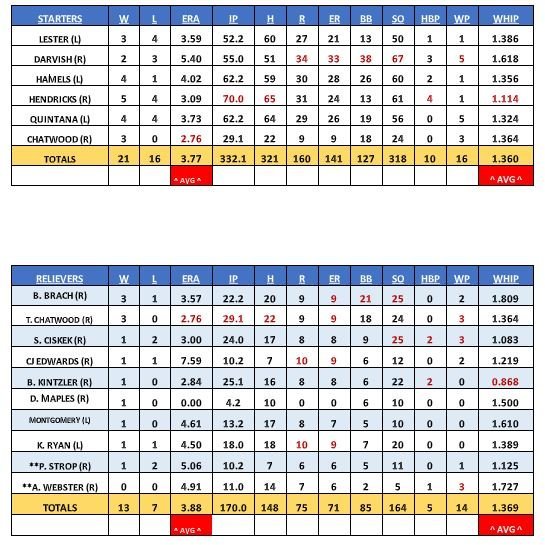 A couple of weeks ago, when I last compiled the stats and rankings, I couldn’t find words to describe the Cubs’ pitching staff- especially the starting rotation. Here I am, just 16 days later, and again, I struggle for words. Save for a good outing by Kyle Hendricks on Wednesday, and a couple of decent starts by Yu Darvish along the way, the rotation has looked awful. Friends keep telling me that it’s just a slump, but I just can’t rationalize how the entire staff slumps in mid-to-late May. With limited innings being pitched by the starting rotation, the bullpen has, once again, become heavily overtaxed, and seldom does anything good ever come out of that scenario. 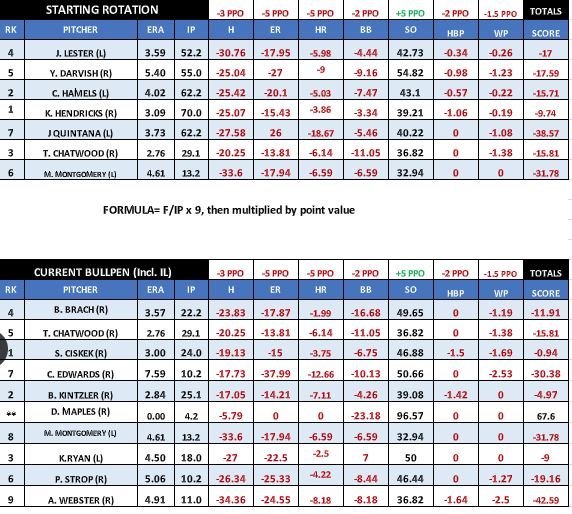 Just a short time ago the Cubs were rumored to be looking at signing, closer, Ken Giles, but as quickly as that rumor flourished, it disappeared again, right around the time that talk of Ben Zobrist retiring started to heat up. I don’t envy Theo Epstein, as he has several holes to fill, and for whatever the real reason, is working with a shoestring budget. The suggested remedies for repair are as individualized as the people making them, but everyone agrees; this bullpen needs help, and the starters need to get back on track.

The team leaders are a little surprising (starters), with Tyler Chatwood owning the lowest ERA of any starter, while Hendricks, holding the highest number of innings pitched, has also given up the most hits. Yu, Yu, Yu… leads the team in ER and walks, but is also atop in the area of strikeouts (67), despite having fewer innings than 1/2 of the other starters.

Moving to the pen, Tyler Chatwood leads the group in innings pitched and ERA, along with hits allowed, and he isn’t far off the pace from leading in strikeouts. Brandon Kintzler is the only guy with a sub-1.000 WHIP (0.868), and while leading the pen in walks, Brad Brach also leads them in strikeouts.

With the recent inconsistency, starters have moved all around in the rankings, with Tyler Chatwood jumping up to #3. Jon Lester’s bad starts have dropped him from the first to the fourth spot, and believe it or not, Jose Quintana now ranks dead last (he’s even behind Mike Montgomery). The most significant jump of the week was The Professor, who surged out of the number-five ranking to #1.

The bullpen didn’t see as many radical changes, but Kintzler relinquished the number one spot to Steve Cishek, and Brad Brach dropped from #2 to #4. For the record, Dillon Maples has the best ranking score, but due to his lack of innings, he was not factored into the results this week. 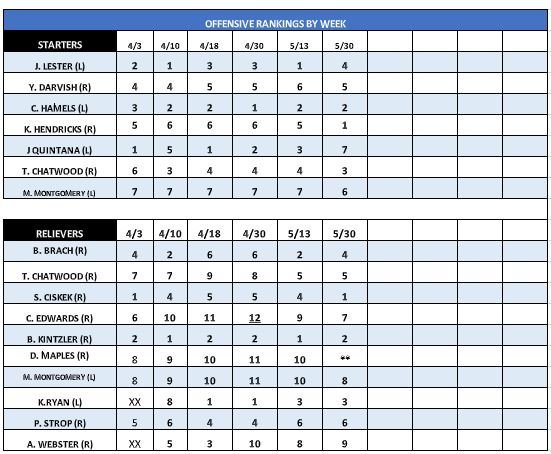 That’s it for this time around, see you next time.