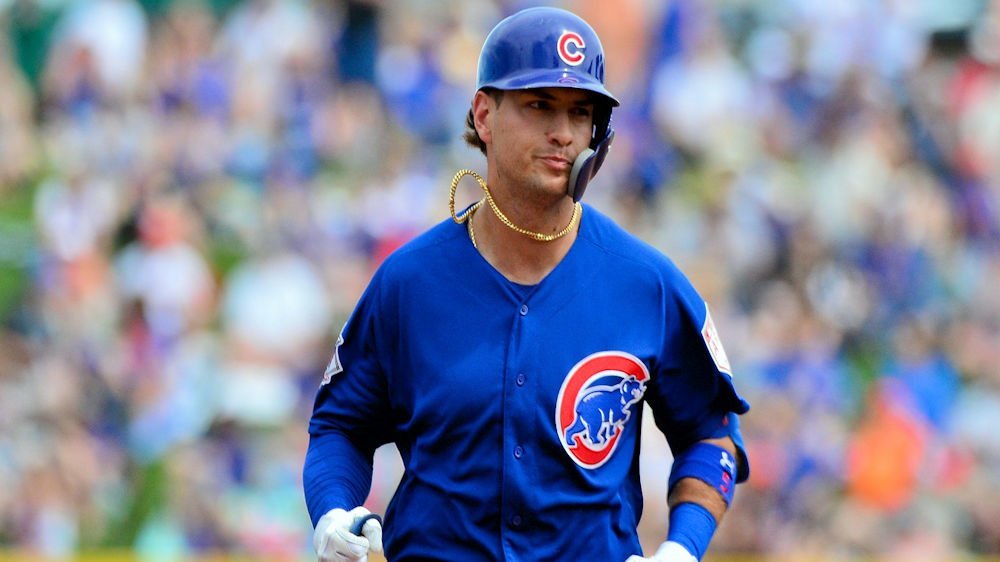 The Giants came in on a hot streak, winning their last four while scoring 35 runs. Almora and Caratini would homer as the Cubs came from behind to the game in the ninth.

T1: The Giants would get their leadoff-man on via a bunt single, but Kyle Hendricks would get a flyout before giving up a 2-run homer. A walk followed a second flyout. The inning would end on an attempted stolen base with Victor Caratini firing to Ian Happ. Cubs trail 2-0.

B1: (SFG: RHP-Samardzija) Albert Almora Jr. wasted no time in cutting into the Giants’ lead with his leadoff homer to left-center. Kris Bryant and Anthony Rizzo grounded-out, before David Bote’s single, but the inning would end on Happ’s strikeout. Cubs trail 2-1.

T2: Hendricks would get two quick outs (groundout, flyout) then give up a double, before getting a grounder to end the inning.

B2: (SFG: RHP-Samardzija) Leading-off, Phillip Evans singled to center, followed by Caratini’s single, which sent Evans to third. Hendricks would ground into a bizarre 3-2-3 double play, erasing Evans, but Caratini would take second. Mark Zagunis got plunked, but Almora’s flyout ended the inning without a run. Cubs down 2-1.

T3: The Professor got busy, retiring the side in order, on a pair of strikeouts and a flyout.

B3: (SFG: RHP-Samardzija) Bryant would pop-out was followed by Rizzo’s double to center. Bote’s groundout moved Rizzo to third, but Happ’s second strikeout of the day ended the inning and another threat. Cubs trail 2-1.

T4: Hendricks would give up a leadoff single, but a grounder to the mound would result in a 1-6-3 double-play (Hendricks-Bote-Rizzo), followed by a strikeout to end the inning.

B4: (SFG: RHP-Samardzija) Evans would groundout, but Caratini’s homer to right-center would tie the game at two. Hendricks would fan and Zagunis would fly out to end the inning. Game tied 2-2.

B5: (SFG: RHP-Samardzija) The Giants would get two quick outs on a groundout (Almora) and flyout (Bryant), but Rizzo would single to the left. Bote fanned to end the inning. Game tied 2-2.

T6: Hendricks would give up the lead, allowing a leadoff double, followed by an RBI single. After inducing a flyout, Caratini would throw out a second would-be base stealer, before Hendrick’s day ended, replaced by Brian Duensing. A groundout would end the inning, with the Cubs down 3-2.

B6: (SFG: RHP-Samardzija) Happ would draw a leadoff walk, followed by Evans lineout, which would end Samardzija’s day (SFG: RHP-Moronta). Caratini would ground to second, but Happ, running with the pitch, would evade the DP. Johnny Field’s strikeout would end the frame.

T7: Duensing would give up a leadoff single, followed by a walk to end his day. Righty, Brandon Kintzler, would take the mound, allowing a leadoff RBI single. It is followed by a flyout and strikeout, before giving up an RBI double. Kintzler would strike out another to end the inning. Cubs down 5-2.

B7: (SFG: RHP-Dyson) Mark Zagunis would start the inning with a single to center, (replaced by pinch-runner, Zack Borenstein). Almora and Cristhian Adames would fly-out, but Jim Adduci’s double would advance Borenstein to third. Bote would ground to the pitcher, but a bad hop followed by a throw that hit Bote would cause Bote to be safe and score two runs. Chesny Young’s groundout would end the inning. Cubs trail 5-4.

T8: Allen Webster sends the Giants down 1-2-3 on a strikeout and a pair of groundouts.

B8: (SFG: LHP-Bergen) Evans would leadoff with a fly out to center, followed by catching prospect, Jhonny Pereda, who’d pop-out on a foul-ball. Field would fan to end the inning, with the Cubs down 5-4.

T9: Righty, Brad Brach, would close out the day on the mound, retiring the side in order (strikeout, line-out, groundout).

B9: (SFG: RHP-Blach) Down to their last out after groundouts by Zack Borenstein and Wynton Bernard, pinch-hitter Kevonte Mitchell would homer to tie it. Adduci’s groundout would end the game. Final score: Giants-5’ Cubs-5. 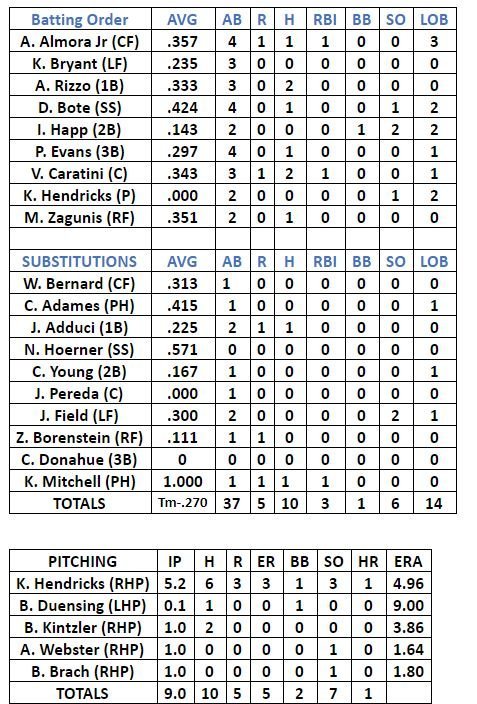