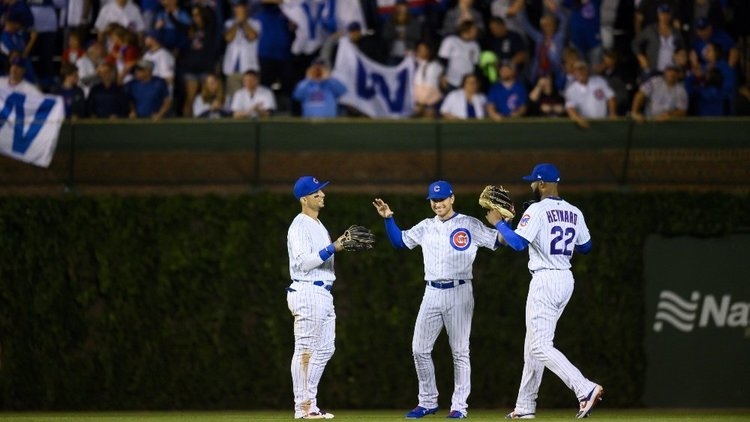 The Cubs swept the Cardinals to finish at 6-1 in their 7-game homestand. (Credit: Patrick Gorski-USA TODAY Sports)

CHICAGO — Flipping the script just one week after getting swept by the St. Louis Cardinals (31-32), the Chicago Cubs (37-27) swept the Redbirds in a 3-game set at Wrigley Field. The Cubs brought out the brooms on Sunday night, as they defeated the Cardinals 5-1 to tally an impressive 6-1 record in their 7-game homestand. Led by starting pitcher Kyle Hendricks, who has not accrued a losing decision since late April, the Cubs never trailed, forcing the Cardinals into stranding nine baserunners.

By giving up just one run in seven innings pitched, Hendricks picked up his fifth win in his last six starts to improve to 7-4. After pitching a gem against the Cubs last weekend, veteran Cardinals hurler Adam Wainwright did not fare particularly well on Sunday. Giving up three runs in 4 1/3 innings of work, Wainwright was pulled in the bottom of the fifth with left hamstring tightness. The injury was likely suffered when the wizened pitcher legged out a double in the previous inning. Cubs leadoff man Kyle Schwarber went 2-for-3 with one walk on the night, and his first-inning base on balls culminated in Anthony Rizzo driving him home on a fielder's choice groundout.

A couple of defensive blunders led to the Cardinals tying the game on a Kolten Wong double in the top of the second. An egregious throwing error suffered by Kris Bryant allowed Marcell Ozuna, who scored on Wong's 2-bagger, to initially reach base. Hendricks consistently dodged bullets after that, pitching with poise when the Cardinals had men in scoring position. A perfect example of that came In the top of the sixth, when St. Louis moved runners onto first and third with no outs but was unable to score.

Meanwhile, the Cubs went up 3-1 in the bottom of the fifth. David Bote plated Jason Heyward on an RBI base knock to center. Soon afterward, Schwarber drove a double into the gap between right and center that ushered Bote home. Schwarber tabbed his second RBI of the evening with a 2-out base knock in the bottom of the seventh that scored Albert Almora Jr., and Cubs newcomer Carlos Gonzalez smacked his first home run as a North Sider when he went yard on a 357-foot solo shot to left in the bottom of the eighth. Closer Pedro Strop entered with the potential tying run on deck in the top of the ninth and forced a game-ending groundout on his first pitch, thereby collecting his seventh save and finishing off the 5-1 Cubs victory.