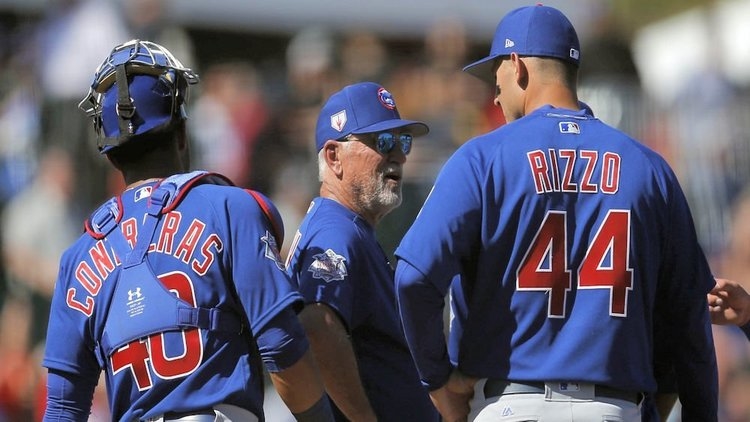 Coming off of a pair of blowout wins (White Sox and Reds), the Cubs traveled to Tempe, AZ this afternoon, to meet the Angels. The game would pit righty, Kyle Hendricks against southpaw, Tyler Skaggs. Former Cub, Tommy La Stella, started at second base for the Halos, while Jason Hayward returned to the Cubs lineup, following an illness that sidelined him for two games.

The Cubs would take an early lead on a Willson Contreras double, but pitching would be their downfall, as they fell to the Angels, 9-2.

T1: With one away, Tyler Skaggs hit Kris Bryant in the foot with a pitch in the dirt, giving the Cubs their first baserunner. Anthony Rizzo singled to right, advancing Bryant to second, but a missed signal by Rizzo (with Willson Contreras at bat) would cause Bryant to be caught in a rundown between second and third. Contreras then doubled to left, but Mike Trout would misplay the ball (error), subsequently kicking it into right field, allowing Contreras to circle the bases completely. Heyward would hit an infield pop-fly to end the inning with the Cubs up 2-0.

That is an inside-the-park home run for Willy ??????? pic.twitter.com/SQIgso8aKx

B1: Despite give up a pair of singles (Calhoun, Pujols), Hendricks would take all three outs via strikeout (Bour, Trout, Simmons). During the inning, Contreras would be charged with an error on a bad throw to second (back-pick attempt).

T2: Skaggs retired Happ (FO) to start the frame, but Russell would smoke a double to left. David Bote would go down swinging, followed by Zobrist who got caught looking to end the inning, stranding Russell.

B2: Hendricks would send em' down in order, getting two quick outs on fly-balls (Ward, La Stella), followed by collecting another strikeout (his 4th) when he caught Bourjos looking.

T3: Coming back for a third inning, Skaggs would get Bryant swinging, then back that up with a groundout (Rizzo). With two away, Contreras singled to center, followed by Schwarber who went down on a swinging strikeout to end the frame.

B3: After giving up a one-out walk (Bour), followed by a single (Calhoun), Joe Maddon would lift Hendricks, based on a predetermined pitch count, replacing him with righty, Mario Meza. On the first pitch, Meza would give up a three-run homer to Trout, putting the Angels up 3-2. Meza would retire the next two (Pujols, Simmons) to end the inning.

T4: Righty, Luke Bard, would face the Cubs in the fourth, retiring them in order (Heyward line-drive to first, Happ strikeout, Russell strikeout).

B4: Carl Edwards, Jr. would give up a pair of singles (Ward, Bourjos), but would get out of the inning without damage, while collecting a pair of strikeouts (La Stella, Thaiss). Cubs trail 3-2.

T5: Facing Cody Allen (RHP), the Cubs would fail to score again. Bote drew a leadoff walk but would be stranded following a long flyout by Zo, a strikeout by Bryant and a groundout by Rizzo.

B5: The wheels would fall off the train when Rowan Wick (RHP) and Kyle Ryan (LHP) teamed up to pitch the fifth. A leadoff home run from Calhoun, was just the start, as the Angels would send ten men to the plate, and score five runs on three singles (Trout, Briceno, Thaiss), a double by Pujols, and a triple by Bourjos. La Stella would also reach on a catcher’s interference (Contreras). Angels lead 8-2.

T6: Righty, Noe Ramirez, would pitch the seventh for LA. After striking out Contreras, Schwarber would double to left, but a Heyward groundout and a Happ flyout would end the inning without a run.

B6: Ryan would throw the seventh, retiring Adell on a liner back to the mound to start the frame, followed by a strikeout (Walsh) for out number two. Justus would single, but the Angels would fail to score.

T7: Russell would double to start the seventh but would be lifted for a pinch-runner (Nico Hoerner). The next three would go down in order (Bote FO, Marzilli strikeout, Evans groundout) to end the inning.

B7: Matt Carasiti (RHP) would pitch the seventh, giving up a one-out walk to Parker. Parker would take third on a wild pitch, then score on a single by Pena. The inning would end on a strikeout to Marsh, with the Angels up 9-2.

T8: Dillon Peters (LHP) would pitch the eighth. Although Charcer Burks and Taylor Davis would hit two-out singles, the Cubs would wind up scoreless on a strikeout (Court), a flyout (Young) and a groundout (Giambrone).

B8: Alberto Baldonado (LHP) would finish the day on the mound for the Cubs, pitching a scoreless inning, despite allowing a leadoff single.

T9: Dillon Peters would close it out, taking the Cubs in order (Hoerner, Bote, Marzilli), to end the game by a final of 9-2.

Tomorrow the Cubs return to Sloan Park to host the Royals. Game time 3:05 PM (EST). While neither team has announced its starting pitcher, it should be Jose Quintana’s turn in the rotation. 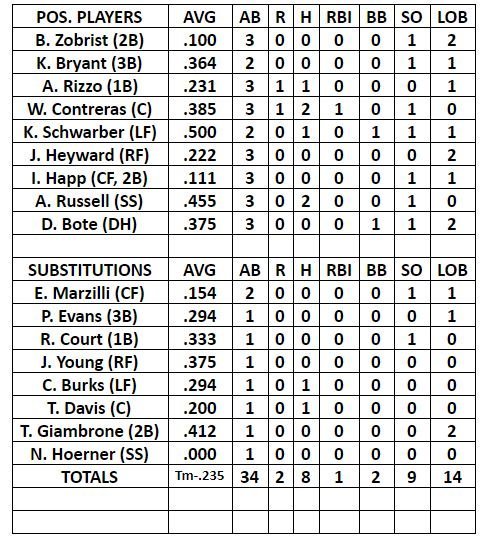 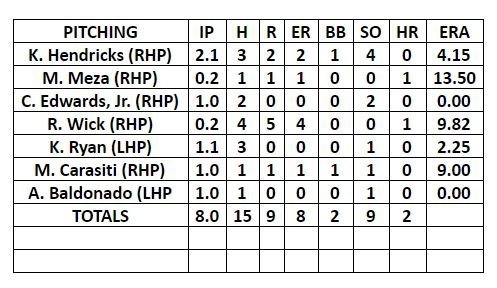