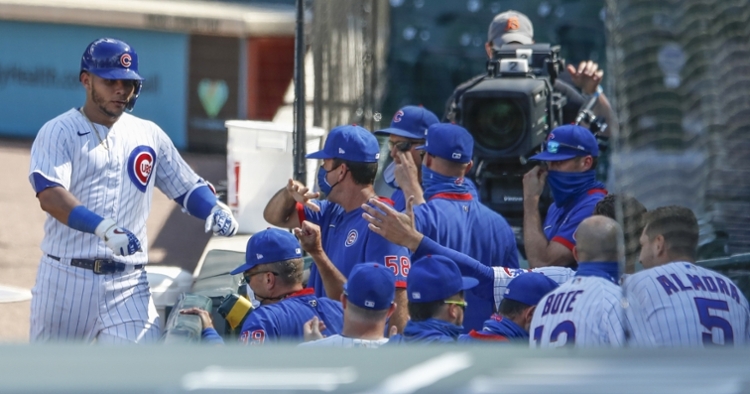 CHICAGO — Notching their first series victory of 2020, the Chicago Cubs (2-1) won a rubber match versus the Milwaukee Brewers on Sunday. The North Siders went yard three times and racked up 11 hits off Milwaukee Brewers (1-2) pitching. Taking two out of three from the Brew Crew, the Cubbies earned a commanding 9-1 victory in the series finale at Wrigley Field.

T1: Fortunately for the Cubs, a defensive blunder did not cost them in the top of the first. With Keston Hiura on first base, Contreras hurled a low throw to first baseman Anthony Rizzo in an attempt to catch Hiura straying too far from the bag. Rizzo bobbled the low throw, and Hiura made it into second base with a steal. However, the Brewers were unable to score.

B1: Brewers starter Freddy Peralta sat the Cubs down in order. With the wind blowing out, a couple of deep fly balls made things interesting in the bottom of the first, though.

T2: Chatwood pitched well in the second frame, striking the second batter of the inning with a filthy cutter.

Look at the cut on this fastball from Tyler Chatwood. K'd Omar Narvaez in the 2nd inning. pic.twitter.com/YLzoXUECxJ

B2: Kyle Schwarber started the bottom of the second with a double that hit off the right field wall. Later, Schwarber advanced to third base on a wild pitch, and Jason Heyward plated Schwarber on a groundout. Hoerner then hit a double of his own but was left stranded.

T3: Continuing to excel, Chatwood relied on his sinker in a scoreless third.

B3: Rizzo was hit by a pitch for the second time in the series, taking one on the foot like a champ. No runs were scored.

B4: The Cubs got to Peralta in the fourth, forcing him out of the game as part of a four-run inning. Schwarber drew a leadoff walk and then came around to score on a well-hit double to right off the bat of Contreras. Peralta proceeded to walk Heyward and was yanked after Hoerner hit the ball up the middle for an RBI single. Reliever Corey Knebel entered and got taken for two straight RBI singles by Victor Caratini and Ian Happ, respectively. Knebel gathered himself and fanned the next two batters. A pitching change ensued, and, after a walk loaded the bases, Schwarber struck out to end an inning in which the North Siders batted around.

T5: Chatwood gave up his only run of the afternoon when Orlando Arcia plated Omar Narvaez with a two-out single. Javier Baez ended the half-inning with a nice snag of a liner hit to shortstop.

B5: Eric Lauer, who finished the fourth, returned to the hill in the fifth and went three up, three down.

T6: Happ highlighted the top of the sixth with a spectacular catch in the ivy. Hiura hit a liner to deep center field, and Happ gloved it while leaping backward into the wall. Chatwood then gave up a two-out ground rule double, but nothing came of it.

B6: Cubs leadoff man Kris Bryant broke out of a slump with a single as part of a scoreless sixth.

T7: Bryant came up with a web gem in the seventh. After corralling a screamer hit up the third baseline, Bryant tagged third base for a force out and fired across the diamond to Rizzo for a double play that ushered in the seventh-inning stretch.

B7: Contreras added to the Cubs' lead with one of the most impressive home runs of his career. Jacking a 451-foot no-doubter out to left field, Contreras went yard quite emphatically. The solo blast marked Contreras' first dinger of the season.

T8: Reliever Kyle Ryan, who finished off the seventh, forced three straight groundouts in the eighth.

B8: Former Cubs reliever Justin Grimm pitched for the Brewers in the eighth. Happ took him deep with a two-run shot over the left field wall. Josh Phegley, who walked in the previous plate appearance, scored as a result of a 374-foot jack. Two at-bats later, Rizzo went yard with a solo blast. The 385-footer to left marked Rizzo's second long ball of the series.

T9: Much like Happ, Albert Almora Jr. made an amazing catch in center field, helping reliever Jeremy Jeffress finish off the Brewers.

Up Next: The Cubs will begin their first road series of the season on Monday, July 27. Set to face off against the Cincinnati Reds (1-2), the North Siders will play four games at Great American Ball Park in the Queen City. The series opener in Cincinnati is scheduled to begin at 5:40 p.m. CDT. Chicago's Jon Lester (0-0, 0.00) is slated to take the mound and face off against Reds hurler Wade Miley (0-0, 0.00).