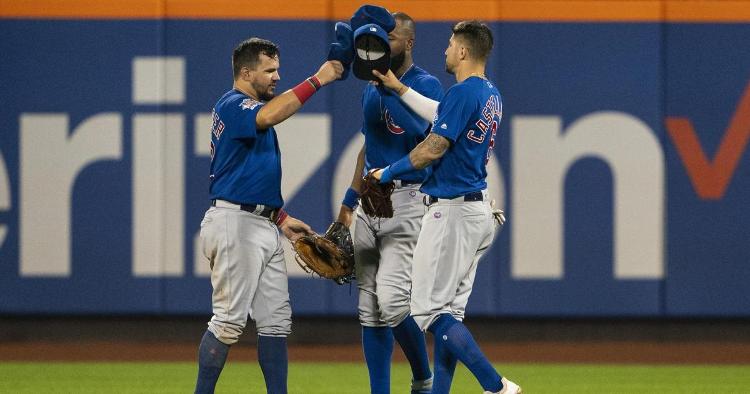 The Chicago Cubs jumped out to an early 10-1 lead and were able to hold off the New York Mets the rest of the way. (Credit: Gregory J. Fisher-USA TODAY Sports)

NEW YORK — In the game of baseball, there is no such thing as milking the clock, but if there were, the Chicago Cubs (71-61) likely would have utilized that strategy on Wednesday night. Serving as a textbook example of staving off an opponent, the Cubs took a 10-1 lead over the New York Mets (67-65) in the top of the third at Citi Field and held on for dear life the rest of the way. The North Siders wound up winning 10-7, with their shellacking of Mets ace Noah Syndergaard, who is known as "Thor," proving to be enough for them to come away with the victory.

The conditions in Queens were rather bleak at the beginning of the game, with the first pitch being delayed 10 minutes due to bad weather, but the Cubs thrived at the plate in the midst of a light rainfall. Syndergaard, on the other hand, suffered one of the most miserable outings of his career, as he gave up 10 runs on nine hits and one walk in three innings pitched. The Cubs went yard off Syndergaard three times, and all three of the dingers were hit to the opposite field.

A 6-run opening frame provided the Cubs with a comfortable lead early on, with Syndergaard giving up five hits and one walk and hitting another batter in the top of the first. Syndergaard's job was made more difficult by an error, though, as Mets shortstop Amed Rosario attempted to out a runner at second base via a difficult flip throw instead of going for the routine out at first base, thus allowing the first run of the evening to score. From there, Kyle Schwarber hit an RBI double, Addison Russell tallied a 2-run bloop single and Ian Happ smacked a 2-run home run out to left-center.

Cubs starting pitcher Kyle "The Professor" Hendricks faced off against Thor on the mound and greatly benefited from Chicago's early-inning dominance at the dish. Lasting 4 2/3 frames on the bump, Hendricks was taken for six runs on eight hits and one walk. The Mets got on the scoreboard after loading the bases with one out against Hendricks in the bottom of the first. A fielder's choice plated the run, and Hendricks then garnered an inning-ending strikeout to escape the jam relatively unscathed.

In the top of the second, the Cubs increased their lead to seven runs when Schwarber cranked a 2-run dinger into the left-field bleachers. The round-tripper came a few at-bats after Kris Bryant led off with a double that was made possible by yet another Mets defensive mistake, with two Mets defenders allowing the popup to fall in for a hit due to miscommunication. With two outs in the top of third, Nicholas Castellanos made it a trio of 2-run blasts for the Cubs by hammering one of his own off Thor, with the third 2-run bomb of the affair providing the Cubs with a 9-run edge.

Much to their credit, the Mets did no go down without a fight, and they chased Hendricks from the game in the bottom of the fifth. Jeff McNeil and J.D. Davis slugged back-to-back home runs for the Mets, with McNeil's 2-run shot being followed by Davis' solo tater. Later in the frame, two consecutive 2-out singles, the second of which was hit off Cubs relief pitcher David Phelps, drove in two more runs, making the score 10-6.

The bottom of the eighth saw a defensive blunder by Baez lead to a scoring opportunity for the Mets. After Baez suffered a throwing error to start the half-inning off, Cubs reliever Rowan Wick was tagged for a double by McNeil. An RBI groundout soon followed, but the Mets were limited to just one run in the penultimate inning. Cubs closer Craig Kimbrel allowed the first two batters of the bottom of the ninth to reach base but buckled down and outed the next three batters to wrap up the Cubs' 10-7 triumph in a frenetic matchup that featured 26 combined hits. As a result of the win in the second installment of the 3-game set, the Cubs secured their second straight series victory on the road, which is a feat that the North Siders had not previously accomplished since May 1.