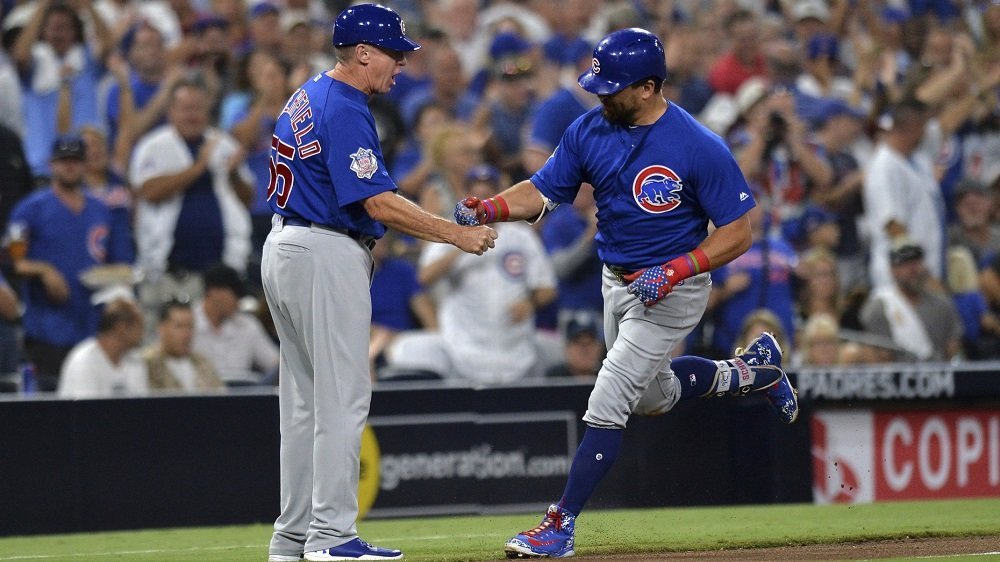 Kyle Schwarber was one of three different Cubs to go yard on the night. (Photo Credit: Jake Roth-USA TODAY Sports)

SAN DIEGO — Hitting three home runs and amassing 13 hits, the Chicago Cubs pounded the San Diego Padres at Petco Park by a final score of 11-6 on Saturday night to move within a win of a sweep. Outfielders Ian Happ and Kyle Schwarber both went yard early on, and, with the Cubs leading 8-4 in the ninth, second baseman Javier Baez sent a three-run jack out of the park for good measure.

Padres starting pitcher Luis Perdomo faced the brunt of the Cubs' hot-hitting night, giving up five runs on seven hits in just 4.1 innings pitched. Coming off his best start of the season, Cubs hurler Kyle Hendricks pitched five innings of two-run ball, which was good enough to provide him with the win and make him 6-8 overall. Perdomo, who was named the game's loser, dropped to 1-4.

Home runs were at the crux of the early action, as the first three scoring plays were all round-trippers. With his lone hit of the night, Padres first baseman Eric Hosmer broke out of a recent hitting slump with a two-out, two-run blast to right in the opening inning, which served as the only major mistake committed by Hendricks on the night.

The Cubs quickly answered with a long ball of their own, as Happ clubbed a solo shot to straightaway center field to lead off the second frame. Happ went 2-4 and scored three runs in the contest. Later, in the fourth, Schwarber provided a preview of his upcoming performance in the Home Run Derby when he powered a two-run blast into the bleachers beyond left field for his 18th homer of the year.

Leading 3-2 after Schwarber's bomb, the Cubs went on to gain some breathing room in the fifth. Right fielder Jason Heyward smacked a double to left that put men on second and third with one out. Initially called out on a tag at second, Heyward was granted a double after Cubs skipper Joe Maddon challenged the ruling, which was subsequently overturned. Baez took advantage of the golden scoring opportunity by attaining his first two RBI of the game on a two-run double to center.

.@Cubs challenge call that Jason Heyward is out at 2B in the 5th; call overturned, runner is safe.

The Padres, who amassed a respectable eight hits and four walks, did not go away quietly. In a pinch-hitting spot, San Diego's Hunter Renfroe took Cubs reliever Randy Rosario deep for a two-run home run in the seventh. However, the Cubs opened the floodgates while facing Padres reliever Phil Maton in the next inning.

With runners on first and second and one out, Chicago shortstop Addison Russell put the Cubs up 6-4 on an RBI single to right-center that scored Happ. The proceeding at-bat saw Victor Caratini, who started behind the plate for the Cubs, increase Chicago's lead to four runs with a two-run double to right. It was not a great night to be a Padres pitcher named Phil, as Phil Hughes relieved Maton to start the ninth and gave up three hits, including the three-run jack by Baez, before recording an out.

After being briefly tied with Schwarber for the team lead in home runs, Baez, who is also set to compete in this coming Monday's home-run contest, retook the outright lead by swatting his 19th round-tripper of the season in the top of the ninth. A 387-foot three-run bomb to right, Baez's four-bagger gave the Cubs a seven-run advantage.

71 RBI before the break.

The Padres mustered two final runs in the bottom of the ninth on a two-run double off the bat of shortstop Freddy Galvis, but the Cubs still won comfortably. The 11-6 triumph improved Chicago to 54-38 while dropping San Diego to 40-58. Batters two through five in the Cubs' lineup all accrued two hits as part of an efficient offensive showing by the North Siders. Baez's five RBI led all hitters. "El Mago" is now tied with Reds third baseman Eugenio Suarez for the National-League lead in RBI at 71.