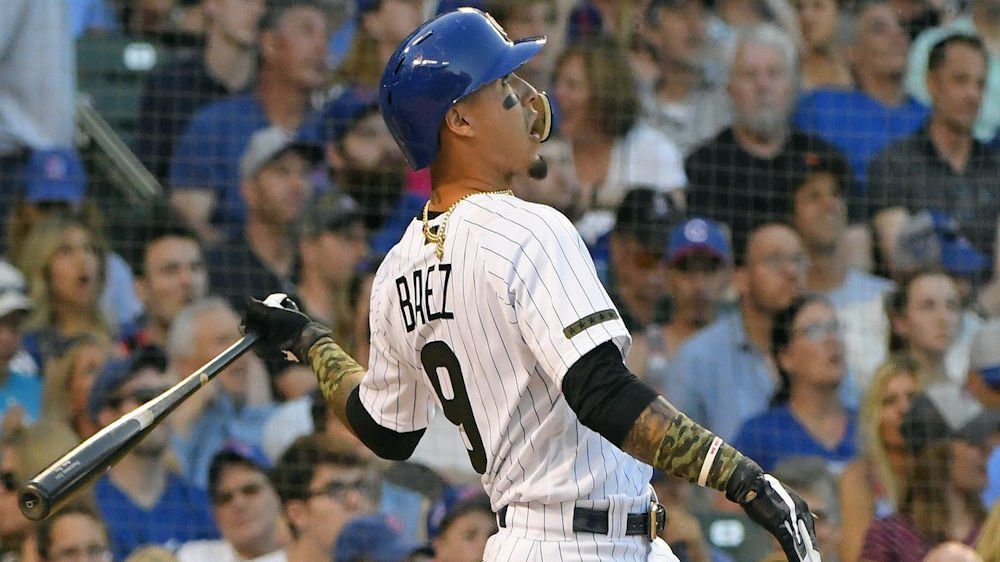 Javier Baez hit one of two home runs for the Cubs on the night. (Photo Credit: Matt Marton-USA TODAY Sports)

CHICAGO — Leaving 10 runners stranded on base, the Chicago Cubs (26-22) left runs on the table in a 5-4 loss to the San Francisco Giants. Outhitting Chicago 11-7, San Francisco (25-27) overcame an early 2-0 deficit to squeak out a win at Wrigley Field.

Struggling with runners in scoring position has been a theme for the Cubs' hitters as of late, and Saturday's first inning saw Chicago score just one run after loading the bases with zero outs. Baez hit a grounder back to the pitcher, enabling Giants starter Chris Stratton to throw home for the first out.

Then, Jason Heyward was walked to bring in the first run, but the Cubs opted to have pitcher Jose Quintana swing with the bases loaded and one out, instead of opting for a squeeze play. That choice cost the Cubs, as Quintana hit into an inning-ending double play.

The Cubs increased their lead in the third, when Kyle Schwarber crushed his ninth home run of the year on a bomb to right. The Giants' Brandon Crawford evened the score with one swing of his bat on a home run of his own in the fourth. Powering a shot to left, Crawford hit a two-run bomb off Quintana that made the game 2-2.

Baez answered with a solo shot in the bottom half of the inning, skying an inside pitch to deep left for a towering home run, which marked his 12th deep ball of the year. Stratton struck out six but gave up three runs on four hits and three walks in five innings of work. He outperformed Quintana, though, and earned the win for his efforts to become 6-3.

Not sure what's better, the Javy Baez homer or the @Cubs' bullpen dancing... ???? pic.twitter.com/UtDgKWw7k1

The Giants took the lead for the first time in the following inning and did not relinquish it. San Francisco outfielders Gorkys Hernandez and Andrew McCutchen hit back-to-back doubles in the fifth, with McCutchen's two-bagger scoring Hernandez to even the game at 3-3. Following an ensuing out, Quintana was pulled from the game in favor of reliever Steve Cishek. Cishek did not get the Cubs out of the jam, however, giving up an RBI single to Brandon Belt.

With four runs charged to his name, Quintana did not have a particularly good night, lasting just 4.1 innings. He received the loss and fell to 5-4. Cishek was responsible for an earned run in the seventh. Hernandez led off with a wily bunt single and, later in the inning, scored from third base on a sacrifice fly. Schwarber made a valiant effort to throw Hernandez out at the plate, but the Giants outfielder slid in safely.

Schwarber, who went 2-4 at the dish, went on to hit a leadoff double that bounced off the wall in right in the eighth. With one out, Cubs first baseman Anthony Rizzo tallied his 32nd RBI on a single to center that brought home Schwarber. Rizzo was left stranded, though, as catcher Willson Contreras grounded into a double play to usher in the ninth.

The Giants faltered with runners in scoring position in the ninth, as pinch hitter Miguel Gomez struck out swinging with two outs and the bases juiced. But Giants closer Hunter Strickland forced the Cubs into a three up, three down bottom half of the ninth to secure the 5-4 win for San Francisco.