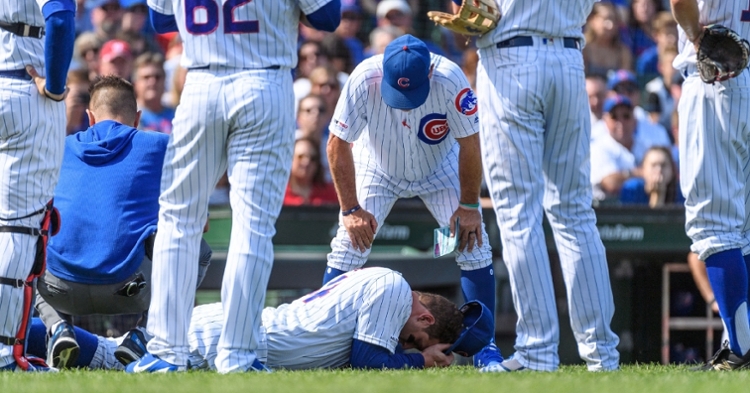 CHICAGO — On a day that the Chicago Cubs (81-68) earned a commanding win, they also suffered a tremendous loss. The Cubs throttled the Pittsburgh Pirates (65-85) 16-6 to cap off their most dominant sweep of the season but also lost Anthony Rizzo to a sprained right ankle. Powering out five home runs at Wrigley Field on Sunday, Cubs hitting blitzed Pirates pitching for the third game in a row. In the 3-game sweep, the Cubs scored 47 runs, which is a modern-era franchise record for the Cubs in a 3-game set, and racked up 14 homers hit by 10 different players.

Kris Bryant tallied two of the Cubs' five dingers on the afternoon, including a 3-run blast that put the Cubs up 3-0 in the bottom of the first. Neither starting pitcher fared well, with the Cubs' Jose Quintana and the Pirates' Trevor Williams both being yanked after 2 1/3 innings pitched. A bunt single in the top of the third changed the trajectory of Quintana's ill-fated start and potentially changed the trajectory of the remainder of the Cubs' season.

Williams laid down a bunt following a leadoff double, and, like he is known for doing, Rizzo strayed from first base and charged the bunt. Unfortunately, Rizzo rolled his right ankle while hustling toward the bunted ball and, after firing a throw to first base that pulled Ben Zobrist off the bag, went down to the ground in pain. Rizzo was eventually helped off the field and replaced at first base by Ian Happ. While X-rays came back negative on Rizzo's sprained ankle, an MRI will be conducted on Monday to determine the extent of the injury.

After Rizzo exited the game, Quintana gave up three consecutive hits, which culminated in the Pirates leading 4-3. A 1-out RBI base knock made the score 5-3 and led to a pitching change. The Cubs' bullpen was able to hold its own the rest of the way, with Chicago relief getting taken for just one run across the final 6 2/3 innings. Any momentum that the Pirates had via their 5-run third inning was quickly lost when Bryant led off the bottom of the third with a solo shot. Victor Caratini scored Kyle Schwarber with a sacrifice fly a few-bats later, and Williams was subsequently pulled.

Reliever Michael Feliz replaced Williams on the mound and proceeded to commit what is assuredly one of the most embarrassing errors in Pirates history. With two outs, Tony Kemp put the Cubs back in front with a 2-run triple hit into the right-field corner. However, the Pirates argued that Jason Heyward did not touch third while rounding the bases, and Pirates manager Clint Hurdle directed Feliz to make an appeal throw to third base in order to set up the possibility of Heyward being called out. However, Feliz airmailed the throw to third, which sailed over the third baseman's head, and Kemp scurried home, increasing the Cubs' lead to three runs.

The Pirates picked up a run via an RBI groundout in the top of the fourth but were outscored 8-0 after that. Ten of the Cubs' 19 hits were of the extra-base variety, including two doubles by Nicholas Castellanos, who leads the majors in doubles. Not long after Castellanos led off the bottom of the fourth with a 2-bagger, Schwarber scored him by way of an RBI single. Schwarber went to cross the plate on yet another sacrifice fly from Caratini, putting the Cubs up 10-6.

The 47 runs scored over the course of the 3-game affair marked the highest such total in a 3-game series for a Cubs team since 1894. Bryant, Castellanos and Schwarber all went 3-for-5 at the dish in the 16-6 beatdown. Bryant's first dinger of the day marked the 137th career long ball for Bryant, breaking Cubs legend Ernie Banks' franchise record for the most home runs hit in the first five seasons of a career. The Buccos and the North Siders will do battle in another 3-game set during the last week of the regular season, with the Pirates hosting the Cubs for three games at PNC Park. For now, the Cubs likely wish that more of their final 13 contests were against the Pirates, as Chicago's weekend sweep at the Friendly Confines featured some of the best hitting that the Cubs have produced all year.