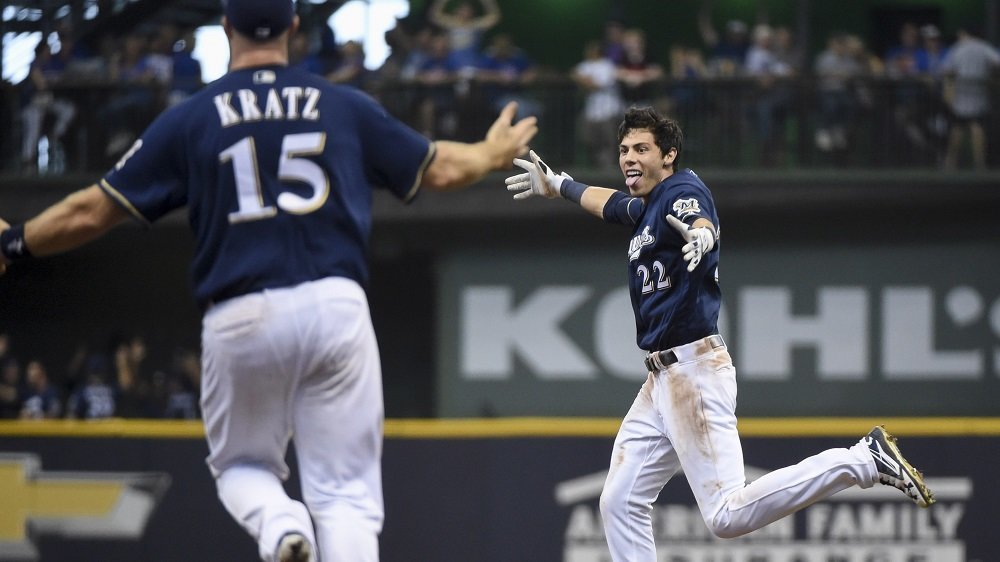 Christian Yelich won the game for the Brewers by beating out a throw at first base on a fielder's choice groundout. (Photo Credit: Benny Sieu-USA TODAY Sports)

MILWAUKEE — Boasting a playoff atmosphere a month in advance of the postseason's arrival, the matchup between the Chicago Cubs and the Milwaukee Brewers at Miller Park on Monday afternoon offered a little bit of everything. From late-game drama to intense at-bats and heated ejections, the Cubs' walk-off defeat at the hands of the Brew Crew oozed with drama. Despite briefly tasting victory following a clutch go-ahead home run by first baseman Anthony Rizzo in the eighth inning, the Cubs gave up two runs thereafter and lost in walk-off fashion in the bottom of the ninth.

The National League Central duel was electric from the start, as Cubs superstar Javier Baez came around from first base to score on a routine single to center field in the opening frame. After reaching base on a bloop single to right, Baez motored from first to home on an RBI single from Rizzo. Baez took advantage of a fielding error committed by Brewers center fielder Lorenzo Cain and was sent home by third-base coach Brian Butterfield, where Baez slid in just ahead of the tag and put the Cubs up 1-0.

With the exception of the Baez base-running highlight, the first half of the ballgame was sparse in terms of offense, perhaps as a direct result of the ambiguous strike zone of home-plate umpire Gabe Morales. The two clubs struck out a combined 21 times in the contest, and Morales received an earful from several displeased batters and pitchers throughout the day.

Cubs ace Cole Hamels went up against Zach Davies of the Brewers on the mound, with Hamels aiming to stay undefeated in a Cubs uniform. Hamels lasted six innings and gave up two runs on five hits in a no-decision, marking the first Cubs start for Hamels in which he was taken for multiple runs. As for Davies, he pitched five innings of one-run ball and gave up four hits.

Much like the top of the first, base running proved critical in the bottom of the fifth. The Brewers scored a pair of runs with two outs, and the two-run rally was sparked by a Hamels balk on an attempted steal. Milwaukee's Orlando Arcia took off for second base, and the left-handed Hamels stopped his windup and delivered a lob over to Rizzo, who then made a low throw to second baseman Daniel Murphy that allowed Arcia to slide in safley.

Eventually, Hamels was scored with a balk on the play, as there was initial confusion regarding whether or not it was a steal. Regardless, Arcia scored soon afterward, as Cain drove him home on an RBI single to left. Cain, who advanced to second base on the throw home on his single, proceeded to steal third, which led to him scoring with ease on the first of two critical RBI for Christian Yelich in the ballgame.

A few innings later, Rizzo answered Yelich's clutch two-out hit with one of his own, as the power hitter slugged a 395-foot two-run bomb off Brewers fireballer Josh Hader to put the Cubs on top. Ian Happ, who drew a leadoff walk to start the top half of the eighth, scored on what served as Rizzo's 24th bomb of the season. For the first time all season, Hader, an All-Star reliever, pitched more than two innings, and Rizzo went yard off him to put the Cubs up 4-3.

The Brewers knotted the game up in the bottom half of the eighth on yet another two-out RBI. A long, contentious inning that featured the ejections of Cubs manager Joe Maddon and Cubs reliever Carl Edwards Jr., the bottom of the eighth frame saw the Brewers profit from a questionable strike-three call. Edwards pitched most of the inning, and, after giving up back-to-back singles to start off, he fanned two straight batters before walking two straight batters.

The first walk was of Ryan Braun, who took first base after ball four was called on a full-count pitch that appeared to have been perfectly framed by Cubs catcher Victor Caratini on the edge of the strike zone. Edwards grew visibly frustrated with Morales because of the call, and, two pitches into the next at-bat, Maddon was thrown out for barking at Morales from the dugout. A flustered Edwards then walked Mike Moustakas on four pitches, and, once he was taken out, Edwards gave Morales a piece of his mind, too, resulting in another ejection.

In the ninth, a similar situation of a reliever arguably being left in for too long cost the Cubs dearly. Steve Cishek, who replaced Edwards in the eighth, walked a batter and hit two others in the first four plate appearances of the bottom of the ninth. He was then pulled with the bases juiced and one out, and Jesse Chavez entered in his wake.

Chavez was able to force a grounder by Yelich in his first at-bat, but a questionable decision by Cubs third baseman resulted in Chicago losing. The chopper to third was fielded at the edge of the infield grass by Bryant, who could have gone home for the safe force out and sacrificed a possible double play. Instead, Bryant opted to try the unassisted double play by backpedaling and touching third base before gunning a throw over to Rizzo. Rizzo did a full split in the process of catching Bryant's throw, but Yelich was able to beat it out, thereby providing the Brewers with a walk-off 4-3 victory.

Show them why you are the reigning NL MVP of the Week, @ChristianYelich! ??

Gaining a game on the Cubs (81-56) in the standings, the Brewers (78-61) moved to within four games of first place in the National League Central. A rousing opener of a three-game series, the rivalry sported a fairly even contingent of Brewers fans and Cubs fans in attendance. Brewers reliever Jeremy Jeffress picked up the win to improve to 8-1, and Cishek was handed the loss to fall to 4-3.