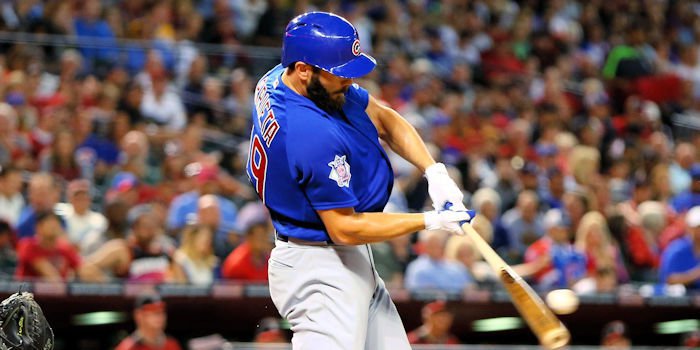 Chicago Cubs pitcher Jake Arrieta showed why he is one of the top pitchers in the major leagues as the Chicago Cubs (5-1) won 7-3 over the Arizona Diamondbacks (2-5) on Sunday.

The reigning N.L. CY Young Award winner picked up the victory as he allowed three runs, scattered eight hits with no walks and six strikeouts in seven innings of work which was his 22nd consecutive quality start that established a new Cubs record.

He also supported his cause with a monstrous 442 ft two-run home run to deep left-center in the second inning. Arrieta's home run was the 12th longest going into today's slate of games in the entire major leagues and the longest home run by a pitcher in the last eight years.

Another intriguing statistic is that Arietta has a greater rate (6.11%) of extra base hits than he has allowed (5.02%) since 2014. He has allowed only four home runs (two on Sunday) while individually hitting three homers since 6/21/15.

The Diamondbacks kept it uncomfortable for the Cubs as first baseman Goldschmidt connected for a deep solo homer in the fourth inning to get within one run and center fielder Britto nailed a solo shot off of Arietta in the fifth inning to tie the game at 3-3. It was the first time that Arrieta had allowed multiple home runs since May 29th vs. Kansas City. In the Cubs organization, Arrieta has 50 starts with 0 home runs allowed, 1 home run allowed in 16 starts and 2+ home runs allowed in three career starts.

Cubs second-year left fielder Jorge Soler smacked a solo shot off of Shelby Miller to provide the Cubs the lead for good at 4-3. Soler relishes batting against Miller as he has three home runs (two vs. ATL) in thirteen total lifetime at-bats.

Soler also scored Jason Heyward from third base on a sacrifice fly for an insurance run in the seventh inning to make it 5-3.

Cubs fans were loud in the last few innings with a 'Let's Go Cubbies' chant as the team piled it on to make it 7-3. The Chicago bats have been smoking hot as they have outscored their opponents 42-15 so far during the season.

Fan favorite infielder Munenori Kawasaki made his Cubs debut in the 9th inning with a single and then later stole second base.

Right-handed pitcher Neil Ramirez pitched a perfect ninth inning with two strikeouts in his first appearance of the year.

The Cubs will finally have their home opener at Wrigley Field against the Cincinnati Reds on Monday night at 7:05 CT on WGN. Injured left fielder Kyle Schwarber will make the trip and be introduced with the rest of the team at Wrigley Field.