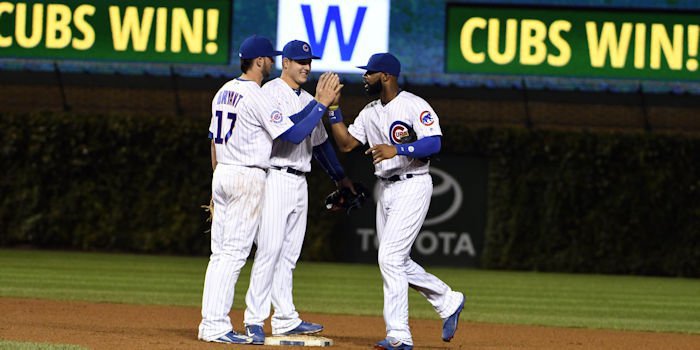 CHICAGO -- Chicago pounded out 15 hits including homers by Kris Bryant and Dexter Fowler en route to sweeping the Reds 9-2 on Wednesday evening. The win puts the Cubs a season-high 42 games over .500 at 97-55 and also reduces the magic number for home field throughout the National League playoffs at two.

John Lackey (10-8) pitched 7 strong innings giving up just 5 hits and 1 walk while striking out 4. Chicago now has five pitchers with 10 or more wins for the first time since the 1993 season. Overall, the Cubs have 76 wins from starting pitchers this season, their most as a starting staff since collecting 87 wins in 1945. Robert Stephenson (2-2) took the loss for the Reds giving up 4 runs in 3.2 innings.

The Cubs scored at least one run in every inning except the second and eighth. Bryant's two-run homer in the seventh inning which was his 38th of the season gave him the most by a Cubs player since Aramis Ramirez hit 38 in 2008. Bryant also collected his 99th RBI on the season which matches his total from last season.

The Cubs only need to win three out the remaining ten games to reach 100 wins on the season and have won 55 games at Wrigley Field, one win shy of the club record for wins at Wrigley Field (56), set in 1933 and 1935.