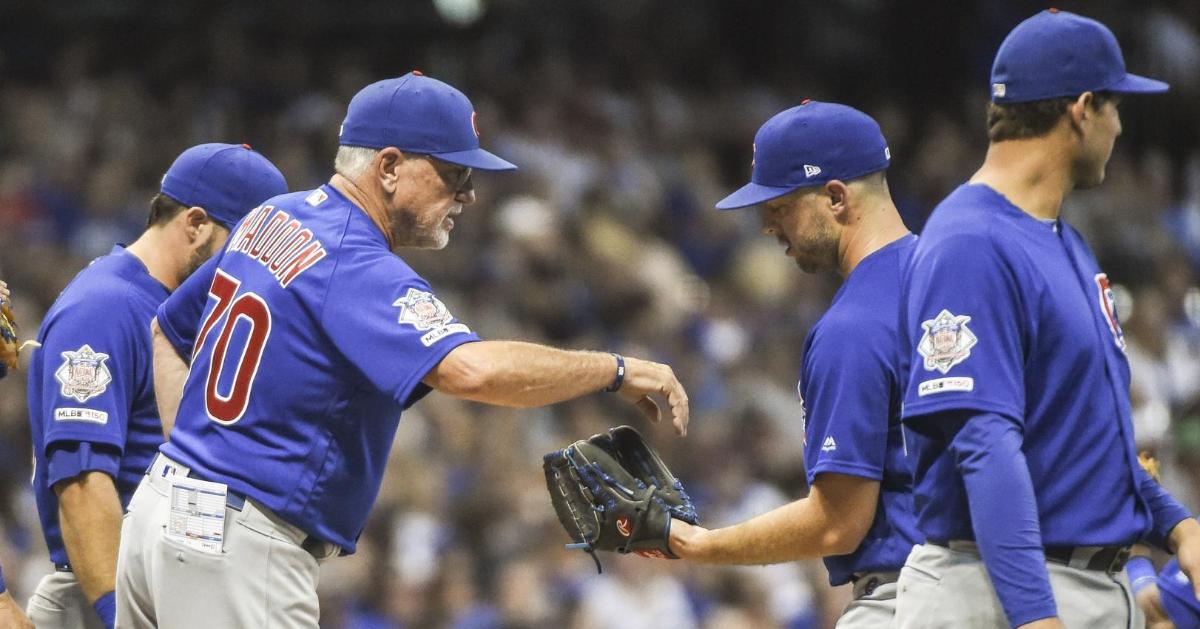 MILWAUKEE — For the second time in less than a week, the Chicago Cubs (55-48) lost a lead in the eighth inning and ultimately lost the game because of it. Falling 3-2 to the Milwaukee Brewers (55-50) at Miller Park on Friday night, the Cubs were outscored 3-0 following the seventh-inning stretch, with a shoddy bullpen performance resulting in defeat. Offense was at a premium in the contest, with both teams recording just four hits, and the Cubs' runs were scored via a 2-run home run.

The opener of the 3-game series between divisional foes saw the Cubs struggle mightily at the dish, with Brewers starting pitcher Gio Gonzalez throwing a no-hitter through five innings. On top of mustering a modest four hits, the Cubs drew just one walk over the course of the game. Star Cubs slugger Kris Bryant recorded two of the Cubs' hits, and the other two were registered in back-to-back at-bats to start the sixth inning. Starting pitcher Kyle Hendricks fared well on the mound for the Cubs in his five scoreless innings of work, as he struck out five and was taken for only two hits. Unfortunately for Chicago, Hendricks threw 90 pitches in the five frames and was removed prior to the bottom of the sixth.

Experiencing a disheartening pitching change themselves, the Brewers were forced to take Gonzalez out after 6 1/3 innings pitched because of shoulder tightness. Gonzalez fanned nine while toeing the rubber, and his only major mistake was throwing a fastball over the heart of the plate that enabled Cubs second baseman David Bote to go yard. Chicago center fielder Albert Almora Jr. led off the sixth with an infield single, and Bote proceeded to cap off an 8-pitch plate appearance with a 411-foot 2-run jack out to left-center, which marked his 10th long ball of the season.

In the bottom half of the sixth, the Brewers loaded the bases with two outs, as Cubs reliever Steve Cishek walked one batter and hit another not long after entering the game with a man on base. Cishek dodged a bullet, though, by forcing an inning-ending flyout to leave all three baserunners stranded. With two outs and a runner on second in the bottom of the seventh, Cishek exited the contest, and Brandon Kintzler took his place on the bump. Kintzler proceeded to give up an RBI single to reigning National League MVP Christian Yelich that plated the speedy Ben Gamel.

Kintzler came out to pitch the eighth and struggled, issuing a walk and hitting Eric Thames, who was beaned by Cishek earlier, in short order. Cubs reliever Pedro Strop was then called upon, and he suffered a similar fate than the one that he experienced when he gave up the Cubs' late lead on Monday night. On the very first pitch of his outing, Strop drilled Ryan Braun in the side with a pitch that got away from him, thus loading the bases with one out. The North Siders caught a break on the next play, with a popup hit into no man's land near the right-field line being snagged by second baseman Robel Garcia after three Cubs converged upon it. Strop was not so fortunate in the next at-bat, as Gamel came through with a go-ahead 2-run single to right-center.

Brewers fireballer Josh Hader gave up a base knock to Bryant in the top of the ninth but was otherwise flawless in his closing out of Milwaukee's 3-2 victory. After spending the entirety of the season in the minor leagues, Ian Happ made his 2019 Cubs debut after getting called up earlier in the day. Although Happ, who started in left field and batted sixth, went 0-for-3 with one strikeout, he made a spectacular sliding catch in foul ground in the opening inning.

*reaches into the ol’ bag of Ian Happ puns* pic.twitter.com/NGWv70iiT9