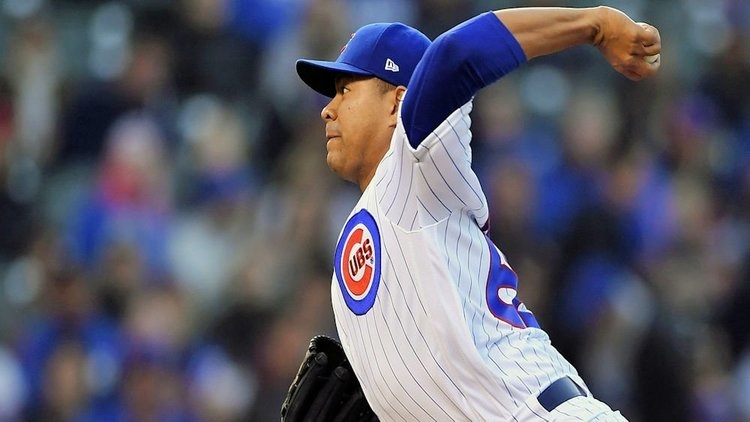 CHICAGO, Ill. — Wasting no time in starting their 3-game set versus the Los Angeles Dodgers (15-10) with a bang, the Chicago Cubs (11-10) put four runs on the board in the first inning of the opener at Wrigley Field on Tuesday and cruised to a 7-2 victory. A clutch 3-run double by catcher Willson Contreras when facing an 0-2 count provided Chicago with its initial lead, and, from there, a commanding outing by starting pitcher Jose Quintana kept the Dodgers at bay.

Dodgers starting pitcher Kenta Maeda endured a long, grueling first inning that featured an abundance of pitches being thrown and culminated in the Cubs registering four runs with two outs. With the bases juiced, Contreras lined a shot past the third baseman and into left field to clear the bases and put the Cubs ahead 3-0. Second baseman Daniel Descalso followed that up with an RBI double of his own on a 2-bagger hit into the left-field corner that plated Contreras.

Maeda continued to struggle in the ensuing frame, with Cubs first baseman Anthony Rizzo tagging a 382-foot jack to left. The 2-run shot marked Rizzo's fourth home run of the season and provided Chicago with a 6-run advantage. As for Quintana, the left-hander tallied his third straight winning decision with a 7-inning outing, in which he gave up two runs and struck out seven. After Quintana's departure, Cubs shortstop Javier Baez tacked on an insurance run in the bottom of the seventh via an opposite-field solo homer to give him seven dingers on the year.

Baez's most impressive play of the night, however, came on an infield single in the bottom of the second that saw "El Mago" juke out Dodgers first baseman David Freese by avoiding his tag and sidestepping to the edge of the basepath before diving in safely at first. Baez went 2-for-3 with one RBI and two runs scored on the evening. With the 7-2 win, the Cubs improved to 8-2 in their last 10 contests and moved to over .500 for the first time since opening weekend.