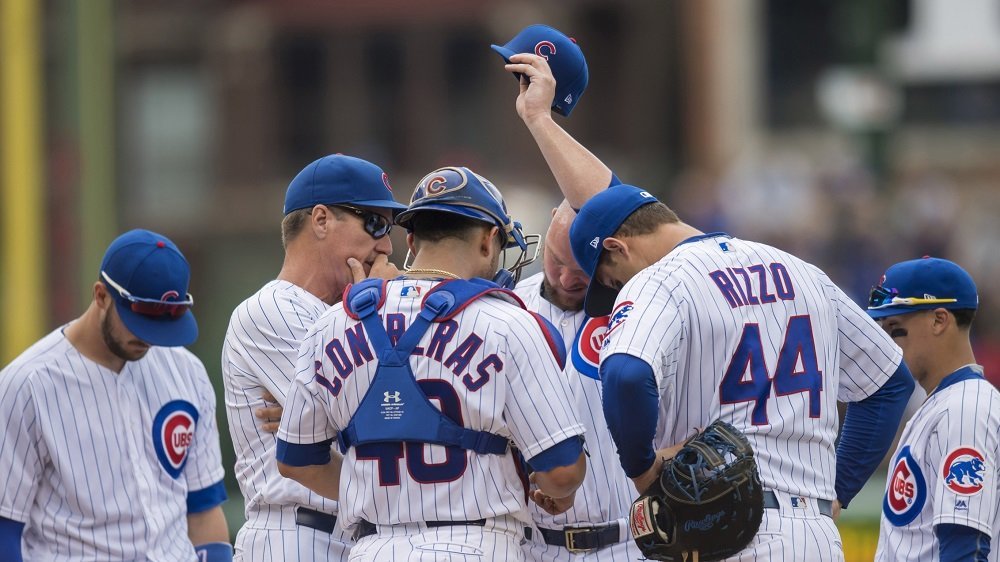 The Cubs gave up five home runs, including three by one player, in an embarrassing defeat. (Photo Credit: Patrick Gorski-USA TODAY Sports)

CHICAGO — Good pitching was so hard to come by for the Chicago Cubs in their 18-5 destruction at the hands of the St. Louis Cardinals on Friday afternoon that Cubs skipper Joe Maddon opted to use three different position players as relief pitchers late in the game. The blowout served as the first occasion since 1907 in which the Cubs sent multiple position players to the mound, as well as the first instance in all of Major League Baseball that a team utilized three position players in pitching spots since the Milwaukee Brewers did so in 1979.

For only the second time in his 20 starts this season, Cubs left-hander Jon Lester failed to pitch at least five innings. As a result, he missed out on a chance to become the National League's first 13-game winner. Lester's only other bad start this season came on Opening Day, when he lasted just 3.1 innings. On Friday, Lester was pulled in the fourth inning after giving up eight runs on seven hits and five walks. The losing decision dropped him to 12-3 overall.

Leadoff hitter Matt Carpenter manned the scoring barrage for the Cardinals by going 5-5 on the afternoon with seven RBI, three home runs and two doubles. Carpenter became the first player in the last 10 seasons to record four extra-base hits in the first four innings of a game, and he incited his club at the start by clubbing a towering home run to right in the first at-bat of the contest.

The Cardinals tacked on four more runs in the second frame. Former Cub and current Cardinal Dexter Fowler provided St. Louis with a two-run lead on an RBI double to deep left. It marked just the fifth hit accrued from the right side of the plate by the switch-hitting Fowler this season. Fowler was next brought home on a single by Tommy Pham, who was plated by a two-run bomb from Carpenter later in the inning.

.@MattCarp13 is the hottest hitter on the planet right now! ???? pic.twitter.com/uXEVmkXzt8

Making his first start since the All-Star Game, Cubs catcher Willson Contreras picked up right where he left off at Nationals Park on Tuesday by swatting a solo home run to left. Contreras's eighth home run, the 392-footer made the score 5-1. Contreras and fellow All-Star Javier Baez came up empty-handed in big spots during the next inning, though, as both fanned at outside pitches for strikeouts with the bases loaded.

WILLLLLSONNNN Contreras cuts into the Cardinals lead, following up his All-Star performance with a solo shot to left.

The Cubs left three stranded in the third and never threatened the Cardinals again after that. Aided by plenty of run support, St. Louis starter Jack Flaherty improved to 4-4 with the win. Striking out nine in five innings of work, Flaherty threw 110 pitches before finally being pulled at the conclusion of the fifth inning.

Lester was yanked in the top of the fourth after giving up a double and back-to-back walks in the first three at-bats. Middle reliever Anthony Bass then entered the game and struggled mightily, giving up an RBI single and walking in two runs before being replaced on the bump by James Norwood. The Cardinals continued to bring runs across following the second pitching change of the inning. Fowler came through with a sacrifice fly, and Pham, who went 3-5 at the dish, hit a two-run single to increase the Cardinals' lead to 10 runs.

Carpenter continued his dominance after that. With an RBI double in the fourth and a three-run moonshot in the sixth inning that barely cleared the partition in right field, Carpenter punctuated his epic performance, which marked just the third-ever three-homer outing by a Cardinal in a game against the Cubs.

Carpenter was pulled from the blowout following his sixth-inning home run. He amassed 16 total bases on the afternoon, which is tied for highest such total in Cardinals history. Interestingly, Carpenter also accomplished something that only Cubs third baseman Kris Bryant had previously done in the modern era, as Carpenter became just the second player to hit three home runs and two doubles in the same game. Bryant pulled off the same feat in 2016. Carpenter currently has 23 homers and 51 RBI on the year.

Utility player Tommy La Stella became the first position player to pitch for the Cubs when he relieved Brian Duensing after Carpenter's third dinger. Through one at-bat, La Stella was perfect, as he forced Yadier Molina to fly out and end the top of the sixth on his first pitch. La Stella cooled off in the seventh, though, giving up three hits, including a leadoff home run by Greg Garcia.

He hit it off an infielder, but the Greg Garcia homer still counts!#STLCards pic.twitter.com/YsS11x8MIH

The Cubs tacked on a few meaningless runs in the bottom half of the seventh, following a fitting rendition of "Take Me Out to the Ballgame" that was ruined when singer Canaan Smith's microphone malfunctioned. Bryant tagged his 11th home run of the year on a solo blast to left-center. Afterward, Kyle Schwarber came up with a pair of RBI by way of a two-run single to right.

KB's 11th home run of the year brings us back within 14 runs. pic.twitter.com/oUZPOUHCbe

Catcher Victor Caratini then took to the hill for an inning of work. Aside from giving up a two-run homer to Yairo Munoz, Caratini was decent, considering the unforeseen circumstances. Caratini also paved the way for outfielder Ian Happ to pitch a scoreless ninth after he scored La Stella on an RBI single in the bottom of the eighth.

Giving up 18 runs and 18 hits, the Cubs were embarrassed in the 18-5 blowout loss to the Cardinals, who lead the season series by a tally of 6-4. Furthermore, St. Louis scored 18 or more runs in a game for the first time since 2008. Becoming 49-47 with the victory, the Cardinals dropped the Cubs to 56-39. Having given up 33 hits to the Cardinals in their first two games out of the All-Star break, the Cubs will aim to right the pitching ship in their doubleheader with the Redbirds on Saturday.