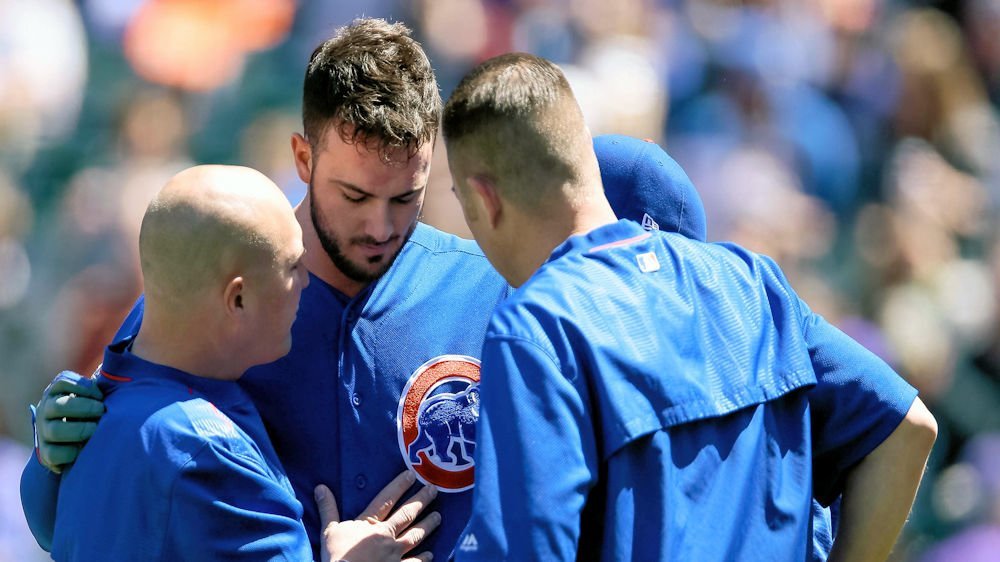 DENVER — Fittingly, the roller coaster ride of a series between the Chicago Cubs and the Colorado Rockies ended with one of the wackiest, most eventful games of the Cubs' young season thus far. From a scary first-inning injury to a pair of miraculous catches in the outfield, Sunday's 9-7 win by the Cubs over the Rockies featured a little bit of everything.

Rockies starting pitcher German Marquez proved to be a major detriment to his own team on the day, giving up eight hits and six runs in 3.1 innings pitched. The Rockies hurler's start was rocky from the get-go, as he drilled Kris Bryant in the helmet on an errant pitch in the opening inning. Leaving under his own power, despite being visibly woozy, Bryant did not return to the game and was replaced by recent call-up David Bote. Thankfully, Bryant passed all concussion protocol and should be expected to return to the lineup fairly soon.

Cubs coaches Chili Davis and Andy Haines are ejected for expressing their displeasure after Kris Bryant takes a pitch to the helmet (01:33)

Following Bryant's HBP, Marquez became conspicously rattled, and he proceeded to give up three runs in the first frame, all with two outs. Four straight singles, from Anthony Rizzo, Tommy La Stella, Kyle Schwarber and Victor Caratini, respectively, led to the Cubs going up 3-0, and second baseman Javier Baez added to that lead in the second inning with a home run to straightaway center field.

His seventh home run of the season, Baez accrued one of his three RBI in the contest via the second-inning shot. Cubs right fielder Jason Heyward totaled two RBI on the day, both coming on a clutch single to right in the third inning that put the Cubs up 6-0. The Rockies mounted a comeback thereafter, however, and if Marquez had not been left in the game for as long as he was, Colorado might have produced their second straight come-from-behind victory over the Cubbies on Sunday.

Jose Quintana got the start for the Cubs on the hill, looking to make up for a seven-run outing in his previous start. Quintana was solid early on but ended up getting taken for eight hits and four runs in 5.1 innings of work. Rockies shortstop Trevor Story was the first to drive in runs off Quintana, hitting a two-run triple in the third. Two innings later, Rockies All-Stars Charlie Blackmon and Nolan Arenado hit back-to-back solo home runs to make the score 6-4.

The Cubs regained a sizable lead in the seventh against Colorado reliever Mike Dunn. With one out in the inning, Cubs reliver Steve Cishek laid down a quality bunt toward third base, which he was able to convert into a single that loaded the bases. Thereafter, Albert Almora, Jr., came up with his sole RBI of the day on a groundout to the pitcher that brought home Schwarber. Following a pitching change, Baez came up large and in charge once more with a two-run double to left, putting Chicago ahead 9-5.

The combination of Almora, Jr., and Baez at the top of the Cubs' batting order produced fireworks yet again in the series finale at Coors Field. While Baez was pivotal with the bat, Almora, Jr., was electrifying with the glove. Making two Superman-like diving snags in the opening two innings, Almora, Jr., made his case for being the everday starting center fielder for Chicago.

Albert Almora is getting really really good at his Willie Mays impersonation. pic.twitter.com/BOa34AhTYq

Another one for Albert Almora! pic.twitter.com/mFSQQi8DJH

After his bunting heroics, Cishek found himself in a jam in the eighth, loading the bases with one out. A fielder's choice groundout enabled Blackmon to score the first of two runs for Colorado in the inning, and, after a pitching change, David Dahl drove home a run with a two-out infield single. That proved to be the last hurrah for the Rockies on the offensive end for the remainder of the ballgame. Cubs closer Brandon Morrow gave up a pair of one-out singles, as well as a two-out walk, in the ninth but was able to keep his composure and collect his fourth save of the year.

The game's conclusion was quite thrilling, as Arenado attempted to score on a wild pitch with two outs and was initially called safe at home, making the score 9-8. However, after a video review, the call was reversed, as it was revealed that Morrow tagged Arenado out just in the nick of time. Despite that thrilling ending, the most exciting moment of the late stages of the game came in the form of an inebriated fan running onto the field and proceeding to get leveled by a security guard.

Not overcome with the multitudinous distractions on constant display in Sunday's matchup, the Chicago Cubs (10-9) picked up a critical win that made quite the statement regarding just how good their hitting can be. Making up for his struggles, Quintana earned the win, moving to 2-1 as part of a seven-strikeout showing. His 7.78 ERA should still be cause for alarm in Chicago, though. As for the Rockies (12-11), who dropped two of three at home to the Cubs in this series, Marquez received the loss, falling to 1-2 overall.