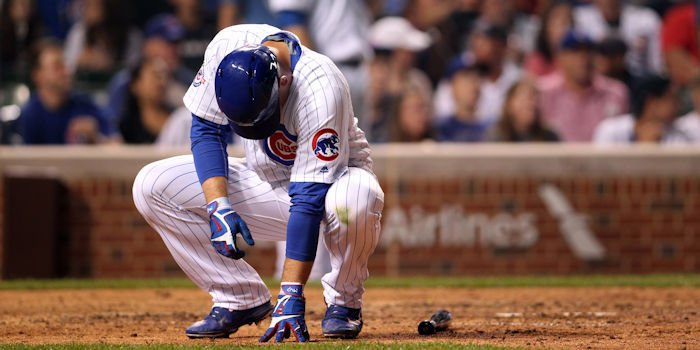 CHICAGO -- In a game featuring a glaring lack of offense, a two-run home run by right fielder Nick Markakis appeared for a time to be all that it was going to take for the Atlanta Braves to defeat the Chicago Cubs at Wrigley Field on Thursday night. However, a three-run bottom of the eighth inning for the Cubs, highlighted by a triple off the bat of rookie catcher Willson Contreras, made Markasis’ homer moot and provided Chicago with a 3-2 lead, only to be spoiled in extra innings by a clutch single that powered the Braves to a 4-3 victory in 11 innings.

With only his third home run of the season, Markakis hammered a pitch thrown by Cubs starter Jason Hammel in the top of the first with a runner on base. Sailing over the wall in right field, the long ball provided the Braves with a 2-0 lead that remained unchanged until the aforementioned bottom half of the eighth.

Ironically enough, the beginning of this game, a makeup from a late April rainout, was delayed an hour and a half, possibly contributing to Hammel’s shaky start on the mound. Though Hammel earned a no-decision for his efforts, he pitched well following the first-inning homer and was victimized by the Cubs’ impotence at the plate, something that has plagued the North Siders for over two weeks now. Eventually being pulled in the top of the sixth due to cramping in his pitching hand, Hammel departed and left the Cubs in a frightening situation.

Chicago’s bullpen has been extremely underwhelming as of late, with a 5.50 July ERA upon entering Thursday’s game to show for it, and it did not fare particularly well on Thursday evening. As for the Braves, starting pitcher Lucas Harrell was excellent on the night, only giving up four hits in 7.2 innings pitched. In fact, Braves interim manager Brian Snitker opting to pull Harrell from the game in the bottom of the eighth after he hit a batter likely prevented the Braves from closing the game out in nine innings.

With two outs and nobody on base, Harrell hit Cubs left fielder Kris Bryant and was pulled from the game thereafter. Reliever Hunter Cervenka proceeded to step onto the mound and hit a batter himself, as he hit first baseman Anthony Rizzo not long after taking the hill. Then, with runners on first and second, Cubs second baseman Ben Zobrist hit a clutch single to right that brought Bryant home, resulting in Cervenka exiting the game. His replacement, veteran reliever Jim Johnson, fared no better, allowing two runs to score on a triple to deep center by Contreras.

With his squad trailing 3-2 entering the ninth, Markakis produced by way of the round-tripper once again, crushing his fourth home run of the season into the right field bleachers. Soon after, a confrontation between Contreras and Braves left fielder Jeff Francoeur following an inside pitch from closer Hector Rondon that Contreras seemed to openly laud. Though Francoeur walked and stole second, the Braves failed to take the lead, setting the stage for a late-night affair.

After the Cubs did not threaten whatsoever in the bottom of the ninth, the game entered extra innings, and, with inexperienced reliever Spencer Patton pitching for the Cubs, Braves first baseman Freddie Freeman garnered a leadoff walk in the 11th that enabled him to score what would prove to be the winning run later in the inning. With two outs and two runners on, Atlanta catcher Tyler Flowers came through with his only hit of the game, bringing home Freeman on a single to right.

Although the Cubs led off the bottom half of the 11th with two hits of their own, shortstop Addison Russell grounded into a costly double play, and, with a runner on third, recent call-up Jeimer Candelario flied out to center to end the game.

Marking their 13th loss out of their last 18 games, Chicago’s defeat at the hands of the lowly Braves (29-57) epitomizes how the Cubs (52-33) have been playing as of late. Thursday’s loss snaps a 93-game win streak for the Cubs when leading upon entering the ninth inning. The Cubs will now head to Pittsburgh to battle the Pirates (44-42) in their final series before the All-Star break.

Former #Cubs All-Star third baseman Bill Madlock joined us for the stretch along with granddaughters Cyndi and Madi. pic.twitter.com/pGOyEjO0CA