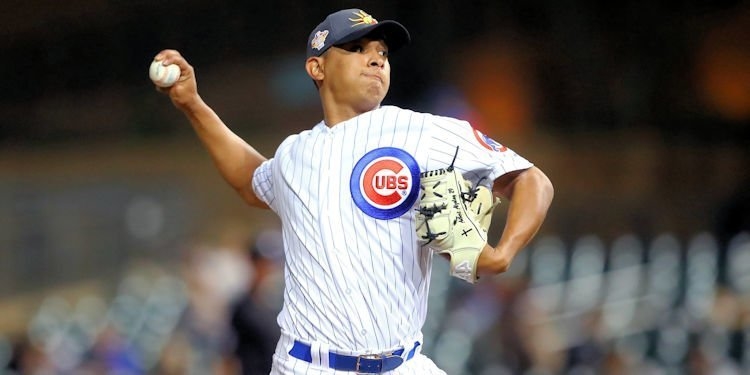 It was an important day in the farm system Friday night despite not the best results. Not only was Tyson Miller back on the mound in AA, but Adbert Alzolay made his long-awaited season debut in AAA hoping to be the first of the wave of pitching prospects to make the MLB roster. Although some results were better than others, the Cubs managed to go 2-2 on the day.

IOWA 5 – New Orleans Baby Cakes 9: It was the long-awaited AAA season debut for Adbert Alzolay as he took the ball for Iowa for the first time in over a year. Whether it was, nerves, rust, or just struggling on the hill, Alzolay was not at his best, yielding 5 ER in four innings of work to take the 9-5 loss to the Baby Cakes.

Lewis Brinson went deep for the second straight game in the first, as his two-run shot put New Orleans up 2-0. Jacob Hannemann notched his second double of the season in the second to pull within 2-1, but that is when the New Orleans offense began to take control. With JT Riddle making it 3-1 with a sacrifice fly in the third, Yadiel Rivera busted the game wide open in the fourth inning with a three-run shot and just like that it was 6-1 Baby Cakes.

The Cubs finally began to show signs of life as they climbed right back into the game in the sixth inning. Starting with the Robel Garcia homer to make it 6-2, the Cubs had plenty of traffic on the bases using a wild pitch to push across another run. Singles by Jim Adduci and Francisco Arcia brought home two more runs as the Cubs closed within 6-5 following the four-run frame.

Unfortunately, the Cubs couldn’t get any closer as James Norwood allowed three runs in his relief outing, including a Rivera homer in the eighth which proved to be more than enough for New Orleans as they picked up the 9-5 victory. Iowa is now 25-17 on the season and has seen their lead in the division shrink by three games over the past week.

Phillip Evans, Adduci and Hannemann all had two hits in the ball game for the Cubs. Ian Happ was 0-4 with 3K’s, while Donnie Dewees has hit a rough patch himself going 0-5 to drop average to .288. Randy Rosario continues to impress in relief tossing 1 1/3 inning of scoreless relief and has yet to allow a run in AAA.

Iowa falls short of the comeback and loses to New Orleans by a final score of 9-5. First pitch tomorrow scheduled for 4:38! pic.twitter.com/BkOHsd85xQ

TENNESSEE SMOKIES 6 – Jackson Generals 2: The Smokies continued their hot streak on the mound as ace Tyson Miller got the ball. Already turning heads with his performances on the mound, Miller was great once again going 7 2/3 innings allowing 2ER with 8K in the win. It was the first time in four starts he allowed multiple runs as his ERA is still an impressive 1.17.

The Smokies struck first in the third inning on the Vimael Machin double giving Tennessee the 1-0 lead. That lead continued to grow in the fourth when Connor Myers hit his second homer of the season to extend the lead to 3-0. Jackson found a way to get back into the game in the bottom of the fourth as they began to time up Miller just a little bit.

Both Andy Young and Ramon Hernandez were able to take Miller deep for rare home runs as the lead was now cut to 3-2. That was no issue for the Smokies, as Miller once again settled down and yielded nothing the rest of the way keeping the Smokies in front.

Looking to extend the lead in the fifth, it was a Generals error that pushed the lead to 4-2 with Tennessee looking for more. Machin provided the offense the rest of the way as a seventh-inning triple and ninth inning double wrapped up the scoring on the evening with the Smokies coming away victorious 6-2.

Machin was a monster at the plate, going 4-4 with 3 RBI’s to raise his average to .357. Myers added two hits in the game, with five other Smokies collecting one. Tommy Nance picked up his first save of the season as the Smokies are back over the .500 for the first time in two weeks at 21-20.

MYRTLE BEACH PELICANS 0 – Lynchburg Hillcats 2: Pitching dominated the night in High-A ball Friday night as both the Pelicans and Hillcats tossed impressive outings. Despite 13 combined hits in the game, only two runs crossed home plate, but both of those runs came from Lynchburg as they held on for the 2-0 win.

Alexander Vargas got the start and was making just his second start of the season. Vargas showed terrific promise as someone the Pelicans can count on down the stretch. In his five innings of work, Vargas was perfect on the hill allowing 0ER, 0H, 0BB, and 0K as he forced plenty of soft contact in the game. His ERA stands at 1.13 through two starts.

Both of the Hillcats runs came in consecutive innings as they waited until the seventh inning to break the scoreless drought. The Oscar Gonzalez seventh-inning double would be all they would need as that hit gave them the 1-0 lead. Jodd Carter added some insurance in the eight with a double to stretch the lead to 2-0, but Myrtle Beach had three-outs to work within the ninth. Unfortunately, Aramis Ademan was the only player able to reach base in that inning as Myrtle Beach fell 2-0.

Despite out-hitting Lynchburg 8-5, the Pelicans couldn’t get a run across home. It was Zach Davis and Ademan leading the way with two hits apiece, while Jimmy Herron, Miguel Amaya, Grant Fennell, and Jhonny Bethencourt all had one. The Pelicans are 15-27 on the year.

SOUTH BEND CUBS 6 – Dayton Dragons 3: South Bend is a team on a mission right now as they ripped off their sixth straight win and ninth in 10 games 6-3. Faustino Carrera took the mound for a start, and after a rough beginning settled down to toss seven innings strong with 3R (2ER) and bringing his ERA to 3.06.

All three of the Dayton runs came right in the first inning as the Cubs were behind big early. With a pair of runners already on base, Mariel Bautista singled home the games first run with an error advancing the baserunners up 90 more feet. That proved to be costly as Pablo Manzanero followed that up with a single of his own to push the lead to 3-0. Fortunately for Carrera, that was all he would allow as it was up to the offense to get back into the game.

South Bend did just that in the fourth as they finally put an end to the shutout bid. A Nelson Velazquez ground out gave the Cubs their first run making it a 3-1 game. Now with two outs and a man on base, Christopher Morel brought home the Cubs second run of the game with a double and just like that it was 3-2. Cole Roederer tied things up in the seventh with a single before the Cubs offense got the last laugh in the eighth.

It was all about the extra base hits in the eight as South Bend used a pair of those to grab the lead for good. Tyler Durna and Morel were responsible for those doubles as South Bend had their first lead in the game 5-3. A Rafelin Lorenzo fielders choice brought home the third and final run in that inning to give the Cubs a 6-3 lead with just three outs to go. Ethan Roberts finished things up from there on the mound tossing two scoreless innings of relief for his second win of the season.

South Bend is now 23-16 on the year and is chasing down Iowa for the best record in the farm system. Durna, Morel and Andy Weber all had three hits in the game with Roederer and D.J. Artis collecting the other two in the win.