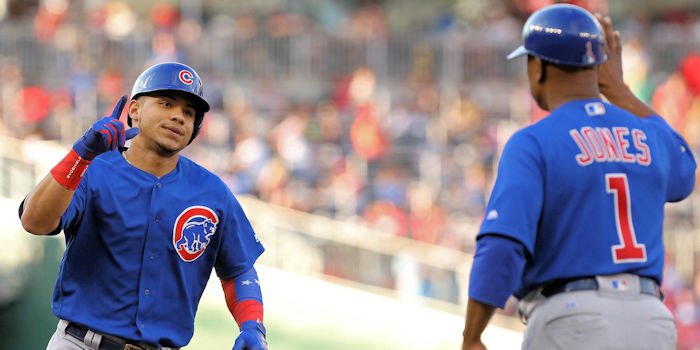 WASHINGTON – Manger Joe Maddon of the Chicago Cubs has fiddled with the leadoff spot in his batting order all season long, refusing to accept that a scrappy on-base hitter is the only answer for a successful leadoff batter. After experimenting with power hitters Kyle Schwarber and Anthony Rizzo at the top of the order, Maddon tried his hand at batting fellow power hitter Willson Contreras leadoff against the Washington Nationals on Monday night. Following suit with Rizzo's first-inning magic of his recent leadoff stint, Conteras essentially won the game for the Cubs in the first at-bat of the night, skying a fastball to left for a home run that put the Cubs up 1-0 early, a lead that the North Siders would not relinquish. Winning 5-4, the Cubs overcame a cold start to the night at the plate by way of showy defensive efforts and smart base-running decisions, tacking on critical runs late in the game while riding Contreras's dinger to victory.

After the Contreras homer, which was his eighth such hit of 2017, offensive was certainly at a premium while the pitching duel between Nats ace Gio Gonzalez and rising star for the Cubs Eddie Butler commenced. In fact, with the exception of the aforementioned home run, the only early-inning excitement came in the form of two defensive web gems made by the Cubs in the bottom of the third. After a leadoff hit by Washington shortstop Trea Turner, Contreras showed the fans in attendance at Nationals Park that he is not just an offensive weapon but a defensive one, too. Pulling off a perfect throw to first, Conteras picked off Turner, marking his 16th instance of outing a runner from behind the plate this season.

Not to be outdone, Cubs infielder Javier Baez saw Contreras's pickoff and raised it with arguably the most impressive defensive play in all of baseball this year as Nationals slugger Bryce Harper hit a line shot toward shortstop. Normally a second baseman, Baez was forced to man shortstop tonight due to an injury that starting shortstop Addison Russell is currently battling. But Baez, who was a star shortstop in high school, did not look at all out of position when he leaped practically horizontally to his left for an all-out attempt at snagging the Harper liner. And he was successful in doing so, ending the inning and wowing the crowd in the process.

Both starting pitchers were superb on the night, with Gonzalez doing an excellent job of overcoming the opening long ball and producing as quality of a losing outing that a pitcher could put forth. Giving up a mere two hits in six innings pitched, Gonzalez (7-2) struck out eight batters and faced few scoring threats. As for Butler (4-2), who earned the win, he fared well himself, allowing only four hits and leaving the game after five innings with zero walks or runs to his name.

.@Butler4Life exits with a 1-0 lead after five shutout frames. pic.twitter.com/wtQQdW4dE2

Through seven innings, the Cubs had a measly three hits in total and were holding on by a thread to their slim one-run lead. However, Baez provided his squad with some breathing room by making an impact on the base path. Befitting of a contest between two of the top teams in the National League, the Cubs effectively won the Monday night NL clash by way of some late-inning small ball. After reaching base on a single with one out, Baez next advanced to second on a fielder's choice groundout. Baez proceeded to steal third for his third base-swiping incident of the season, and he then showcased his trademark speed soon after by charging home safely on a gutsy squeeze bunt by outfielder Albert Almora. Baez, the definitive spark plug of Monday's game, did not slow down from that point onward, hauling in a sliding catch in foul territory in the bottom half of the inning for his second web gem of the night.

Following a series of pitching changes in the eighth inning that saw the Cubs evade a Nationals scoring threat, the Cubs put the game seemingly out of reach in the top half of the ninth by adding three more runs to the board. A comedy of errors plagued the Nationals, as errors on back-to-back plays resulted in Chicago pinch hitter Tommy La Stella, who reached base at the start of the inning on an infield hit, scoring to place the Cubs up 3-0.

With a runner on first and one out, Washington then made the interesting decision to intentionally walk Chicago third baseman Kris Bryant. Thereafter, the Cubs made an even more interesting decision to attempt a double steal with tall, lumbering corner infielders Bryant and Rizzo on base. While Rizzo was caught stealing at third, Bryant advanced to second and scored on an ensuing RBI single from second baseman Ian Happ. Following an ineffective pitching change, Baez came through with his second big hit of the night, smacking a double in the gap between right and center that scored Happ, putting the Cubs up 5-0. In the end, the three insurance runs in the ninth proved to be just enough for Chicago, as the Nationals found their deficit too vast to overcome.

Despite a valiant comeback effort in the bottom of the ninth that saw them finally drive some runs home, the Nationals came up short, losing 5-4 at home. Early on, catcher Matt Wieters collected an RBI single to put the Nats on the board for the first time all night, which was enough to incite the Cubs to bring closer Wade Davis into the game. Davis was uncharacteristically inept, though, giving up a two-run double to pinch hitter Stephen Drew and enabling an additional run to score on a wild pitch. However, Davis used two crucial strikeouts to end the game. Appropriately, the game-ending strikeout of Ryan Zimmerman was on a pitch in the dirt that allowed for Contreras, the hero of the game for the Cubs, to throw to first to complete the out and put a bow on the Chicago victory.

In addition to scoring what were basically the two most important runs of the game, Baez and Contreras were the lone Cubs to experience multi-hit games, going 2-5 and 2-4, respectively, at the dish. Accruing nine hits in all, the Cubs were fortunate that the Nats were impotent with the bat for most of the game, as Washington's four-run ninth was a classic case of too little, too late. Moving to 39-37, Chicago trumped Washington (45-31) 5-4 in the opener of the four-game series in the nation's capital. A thrilling battle, the first game could very well be the first of four such thrillers and could also potentially serve as foreshadowing for the 2017 National League Championship Series in October.

So just three more of those, right? pic.twitter.com/bpgYUBmzLO