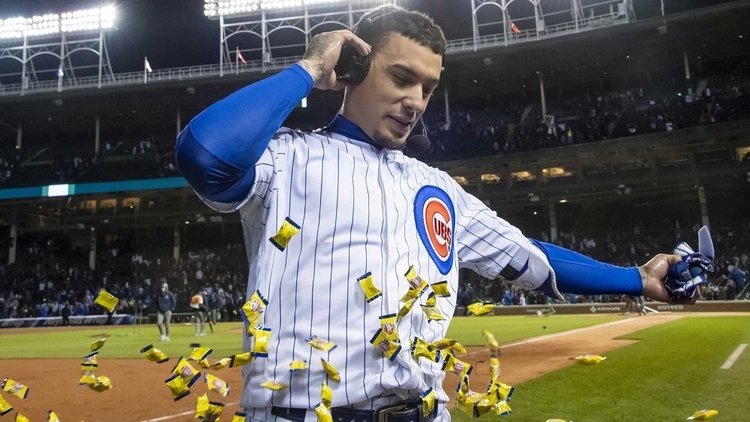 An avid chewer of gum, Javier Baez had a bucket of bubble gum dumped onto him by his teammates after the walk-off win. (Credit: Patrick Gorski-USA TODAY Sports)

CHICAGO, Ill. — On Tuesday afternoon, it was announced that Chicago Cubs (28-18) shortstop Javier Baez would be out of the starting lineup for the second straight contest against the Philadelphia Phillies (28-20), as Baez missed Monday's game due to a heel injury suffered on Sunday. Additionally, news broke that Baez would be undergoing a precautionary MRI to determine the extent of his foot injury. Therefore, when Baez stepped up to the plate as a pinch hitter with the bases loaded and the game tied on Tuesday night, it was quite the surprise. Not much time was granted for processing the stunning turn of events, though, with "El Mago" showing off his wizardry by driving the first pitch thrown to him into right field for a walk-off single that provided the Cubs with a riveting 3-2 win at Wrigley Field.

The Cubs manufactured a 2-run ninth off Phillies closer Juan Nicasio after not scoring a single run in innings two through eight. Phillies starter Zach Eflin gave up the first run of the evening in the bottom of the first. Heady base running by Kris Bryant resulted in the Cubs getting onto the scoreboard, as Bryant advanced from second to home on a routine grounder to shortstop by timing his rounding of third just right and essentially fooling Phillies shortstop Jean Segura. Bryant slid in safely ahead of the throw home from first baseman Rhys Hoskins to put the Cubs up 1-0.

After that, the Cubs did not muster much offensive excitement until the ninth. In fact, Baez's walk-off base knock was the lone hit of the night for the Cubs with runners in scoring position. Chicago was braced by a masterful 6-inning start on the mound by Jose Quintana, who gave up just two hits and struck out four batters in a scoreless outing. In the bottom of the fourth, Bryant, who went 3-for-4 at the dish, momentarily picked up an RBI when he lobbed a ground-rule double into the left-field corner that ushered Kyle Schwarber in to score. However, a replay review by the umpires determined that Schwarber would not have been guaranteed of scoring had the ball not bounced over the boundary and been blown dead. Therefore, Schwarber was sent back to third base, thereby retracting the run.

Maligned Cubs reliever Carl Edwards Jr. suffered a familiar fate when he struggled through his seventh-inning appearance. Edwards exited with men on second and third and two outs, and Brandon Kintzler, Edwards' replacement, was then tagged by Andrew McCutchen for a 2-run single that put the Phillies on top by a score of 2-1. Luckily for Edwards, he was bailed out by a worse stint on the mound by Nicasio in the ninth. Nicasio walked the leadoff man, Bryant, and next gave up a double to Anthony Rizzo that set the stage for Baez's eventual heroics.

Prior to Baez digging in at the plate, Albert Almora Jr. accrued an RBI with one out and the bases loaded, when he hit a dribbler to the first-base side that was just effective enough to allow Bryant to score his second run of the game. The bases were still loaded with one out at that point, and Baez's name was called to pinch hit for Daniel Descalso. Baez wasted no time in proving why the decision to have him pinch hit was a wise one, with the superstar infielder recording a walk-off single to the opposite field on the first pitch of his at-bat. Rizzo scored as a result, and the Cubs won 3-2 to even the series up at one game apiece through two installments of the 4-game series.