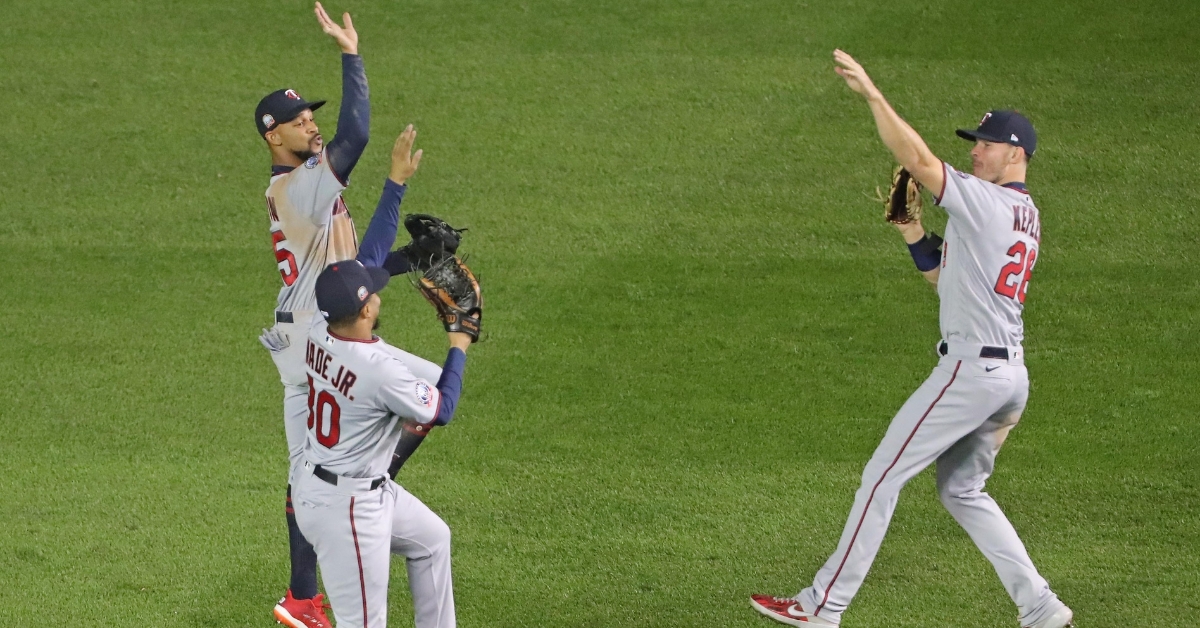 By virtue of their win, the Twins secured a playoff spot for the second straight season. (Credit: Dennis Wierzbicki-USA TODAY Sports)

CHICAGO — Making his first start since throwing a no-hitter the previous weekend, Alec Mills of the Chicago Cubs (31-21) was not nearly as effective as he was his last time out. Despite striking out seven on Saturday, Mills was charged with four runs in six innings pitched against the Minnesota Twins (32-22), who tallied six hits and one walk off him.

The Twins defeated the Cubs 8-1 in the second installment of a three-game series at Wrigley Field, earning the Twins their second consecutive postseason berth. Chicago, on the other hand, suffered its first lopsided loss in nearly a month and had its five-game winning streak snapped. Minnesota outhit the Cubs 10-5 and pulled away from the North Siders with a five-run seventh inning.

T1: Mills struck out three of the four batters he faced in the top of the first, but the other batter, Eddie Rosario, took Mills deep. Nullifying Mills' chances of throwing a second straight no-hitter rather early on, Rosario smoked a two-out solo home run to right. A lighthearted moment occurred in the first at-bat of the game, as a foul ball hit by Byron Buxton rolled off the protective netting before bouncing off the top of a dugout and boinking Anthony Rizzo on his head. In typical Rizzo fashion, the fun-loving first baseman laughed it off and never showed a glimpse of pain.

B1: Michael Pineda started on the bump for the Twins and worked a 1-2-3 first frame.

T2: The Twins went down in order their second time up to the plate.

B2: Willson Contreras was hit by a pitch for the MLB-leading 12th time to kick off the bottom of the second. He tagged up and reached second on an ensuing lineout. With two outs, Jason Heyward smacked an infield single that shortstop Jorge Polanco prevented from rolling into the outfield via a diving stop, thus causing Contreras to hold at third. David Bote then came through with an RBI double that scored Contreras and allowed Heyward to cruise into third. Nico Hoerner laid down a surprise bunt after that, but he was thrown out by third baseman Ehire Adrianza in the nick of time.

Nobody puts Bote in the corner. pic.twitter.com/1UA8DFL5yP

T3: Former Cub Alex Avila clubbed a one-out double but was left stranded by the two groundouts that followed.

B3: Pineda went three up, three down through the third.

B4: Javier Baez and Heyward hit back-to-back singles with two outs but were left stranded when Bote grounded into a fielder's choice.

T5: Following a leadoff single by Jorge Polanco, Marwin Gonzalez hit a comebacker that Mills snagged between his legs off a bounce. Mills fired to Baez at second for the first out, and Baez threw to Rizzo to complete the double play.

Glove save and a beauty! pic.twitter.com/fiFxDj6zma

T6: Avila drew a leadoff walk and took second on a groundout. The Twins then made what proved to be a canny decision by having the much faster Jake Cave pinch run for Avila. With two outs, Rosario smacked a single to right, and Cave hustled home, beating out a throw to the plate made by Heyward in right. Rosario was picked off first by Mills, as his foot slipped off the bag, allowing Rizzo to secure the tagout.

The first pitch has worked out well for him tonight. #MNTwins pic.twitter.com/x95BF1Nkiq

B6: Tyler Duffey relieved Pineda prior to the bottom of the sixth and tossed a 1-2-3 inning.

T7: Minnesota scored five runs on five hits in the seventh. Miguel Sano led off with a mammoth home run hit out onto Waveland Avenue. Max Kepler proceeded to hit a ground rule double into the ivy, resulting in Mills being relived. Josh Osich entered to pitch and was taken for an infield single by Polanco that Kris Bryant knocked down at third base, thereby preventing it from traveling to the outfield. Gonzalez was then hit on the foot by a pitch to load the bases. Josh Donaldson pinch hit and slapped a worm burner right to Baez, who struggled to corral the ground ball before making an errant throw to the plate that enabled a run to score.

Duane Underwood Jr. entered to pitch at that point, and he started off by giving up an RBI base knock to Mitch Garver. Thereafter, center fielder Ian Happ garnered assists on back-to-back plays. LaMonte Wade Jr. lined out to Happ, and, while Donaldson tagged up and reached third, Garver was thrown out attempting to reach second. Buxton singled in the next at-bat and decided to try his luck when motoring for second base. Happ mowed him down, too, but not before the fifth run of the inning scored.

Now *this* is a ground-rule double. #MNTwins pic.twitter.com/RDndraARyZ

B7: Matt Wisler gave up a single to Heyward but struck out the other three batters he faced in the seventh. Heyward went 3-for-3 on the night and was the lone Cub to accrue multiple hits.

T8: Rex Brothers struck out the side in his lone inning of work.

B8: Wisler responded to Brothers by striking out the side himself in the bottom half of the same inning.

B9: Tyler Clippard finished the Cubs off with a three up, three down ninth. While Mills dropped to 5-4 with the loss, Pineda received the win to move to 2-0, and Duffey obtained his 12th hold. The Cubs' lead in the National League Central shrunk to 4 1/2 games.

Up Next: The series finale is set for 6:08 p.m. CDT on Sunday, Sept. 20. Cubs right-hander Yu Darvish (7-2, 1.86) will look to boost his National League Cy Young Award candidacy with a quality start against Twins right-hander Jose Berrios (4-3, 4.15), who is Baez's brother-in-law. The conditions are expected to be clear with mild temperatures for what will be the final regular season game at the Friendly Confines.