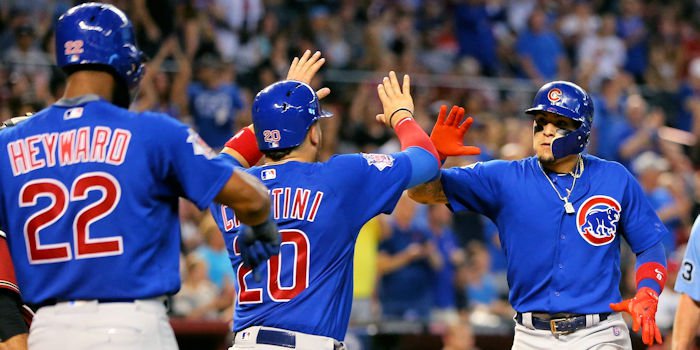 CHICAGO – Fans will welcome back Cubs players, coaches and alumni at the 33rd Annual Cubs Convention this week, January 12-14, 2018, at the Sheraton Grand Chicago. The 2018 Cubs Convention will include more autograph opportunities, additional alumni appearances and enhanced kid-friendly activities during the three-day weekend.

Saturday’s program continues with fan favorites such as the return of Cubs Jeopardy, which features unique trivia with Cubs alumni. Popular reoccurring Saturday sessions will be back, including Baseball Operations Update, Business Operations Update, Joe Maddon & His Coaching Staff and Ricketts Family. Saturday’s line-up has been updated to include Toeing the Rubber presented by Wintrust and In the Batter’s Box presented by Wintrust. The popular Kids Only Press Conference presented by Advocate Children’s Hospital is now 15 minutes longer and is hosted by Cubs first baseman Anthony Rizzo. Fans can later reminisce with Cubs alumni Andre Dawson, Derrek Lee, Juan Pierre and Carlos Zambrano during the Welcome Back panel followed by long-time Convention favorite Cubs Bingo presented by Budweiser and led by Wayne Messmer.

Sunday’s program concludes with additional autograph sessions and panels including Down on the Farm and Remembering Jack Brickhouse and Harry Caray.

In addition to the sessions highlighted above, the Convention includes several returning activities throughout the weekend for fans:

Fans can snap photos of historical game-used artifacts from winning seasons and Cubs players in the National Baseball Hall of Fame along with the 2016 World Series Trophy.

The youngest Cubs fans at Convention should get ready to sing and dance with Wiggleworms Saturday morning on the turf field in Clark’s Clubhouse, get exclusive kids-only autograph opportunities featuring current Cubs and alumni and an opportunity to try on a real Cubs uniform.

Cubs Charities, located again this year on the main lobby floor, will feature a variety of items and experiences for sale, including private player meet and greets, baseballs, ball cubes, autographed mystery baseballs, grab bags and a garage sale.

Guests can visit a dedicated social media area for giveaways and an interactive GIF and photo booth with special guest appearances throughout the weekend.

A list of confirmed players, coaches, alumni, team executives and broadcasters is available at www.cubs.com/convention.