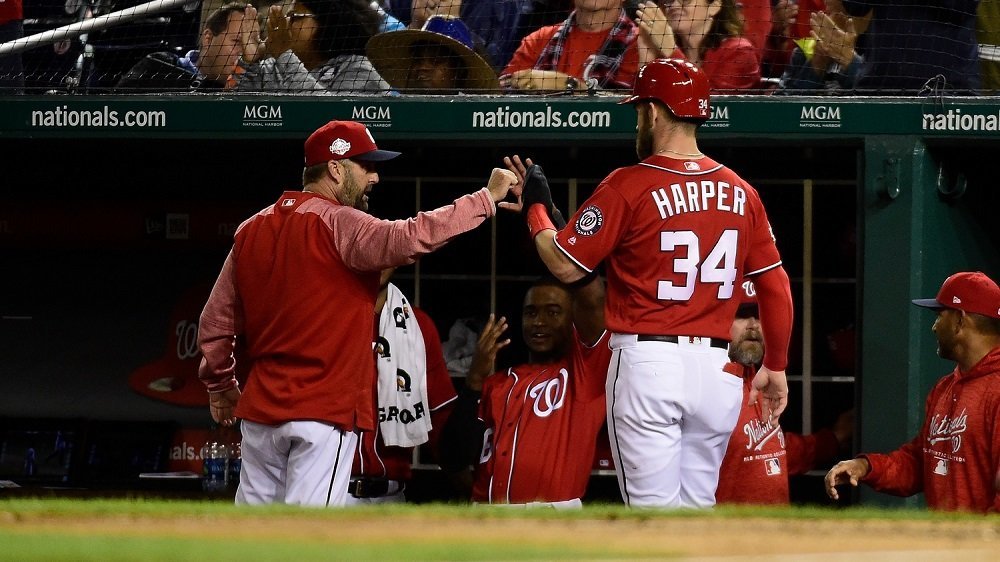 WASHINGTON, D.C. — In yet another Chicago Cubs-Washington Nationals matchup impacted by rainfall, the Cubs were the ones to end up wet and miserable, as they blew a 4-0 lead and lost 6-5 in the nightcap of a doubleheader. Rain pushed back the start time of the first installment of the doubleheader, which was in place to begin with because of a postponement due to rain for Friday's game, and rain also caused a late-game delay in the second installment of the doubleheader.

With rain coming down for most of the contest, the Cubs appeared to be in good shape after taking a 4-0 lead on a grand slam by catcher Victor Caratini in the fourth inning. However, a three-run seventh inning for the Nationals that included a go-ahead home run by superstar right fielder Bryce Harper culminated in the Nats win.

Ace Cole Hamels started on the mound for the Cubs, looking to remain undefeated with the team. Hamels dominated early on but struggled in the sixth inning before being pulled having given up three runs in 5.2 innings pitched. Nationals starting pitcher Jefry Rodriguez suffered one critical mistake in his four innings on the hill, as he was taken deep by Caratini.

Caratini's third career home run marked the first hit of the ballgame, and the young backstop punctuated the bases-clearing blast with a demonstrative bat flip. The Nationals tallied their first hit of the contest in the bottom of the fourth, when Adrian Sanchez brought home Harper with a two-out triple to deep center field. Harper drew a walk to lead off the frame.

The precipitation began to steadily increase around the midpoint of the contest, perhaps affecting Hamels in the sixth. On just the second pitch of the bottom half of the sixth inning, Anthony Rendon took Hamels deep on solo home run to left-center. Hamels then walked two straight batters before being bailed out by a double play. However, Hamels then gave up another two-out hit to Sanchez, who smacked an RBI ground-rule double to make the score 4-3 and chase Hamels from the game.

Designated pinch runner Terrance Gore helped the Cubs get a run back in the seventh, as he stole second and third after being inserted into the game to run for Tommy La Stella, who led off with a single. With two outs, Kris Bryant hit a double to left-center that drove Gore home and put the Cubs ahead by two runs.

Cubs relievers Steve Cishek and Justin Wilson essentially combined to blow the game for the Cubs in the bottom of the seventh. Cishek got taken for a one-out single by Trea Turner, who scored soon afterward on a double by Rendon. Wilson then entered the game to replace Cishek and face Harper. Harper wasted no time in going yard off Wilson, jacking a third-pitch no-doubter 413 feet beyond center field to provide the Nationals with a 6-5 advantage in the pouring rain. Wilson earned the losing decision to fall to 4-4 overall.

Following the conclusion of the top half of the eighth, a rain delay, which lasted for an hour and a half, commenced, and, not long after play resumed, Washington (71-72) emerged victoriously in the wee hours of the morning. Chicago (83-59), which lost both games of Saturday's doubleheader, was essentially done in by manager Joe Maddon's decision to have Wilson face the most dangerous hitter in the National League. Nationals reliever Wander Suero picked up the win to become 2-0, and Greg Holland obtained his second save in a Nationals uniform.