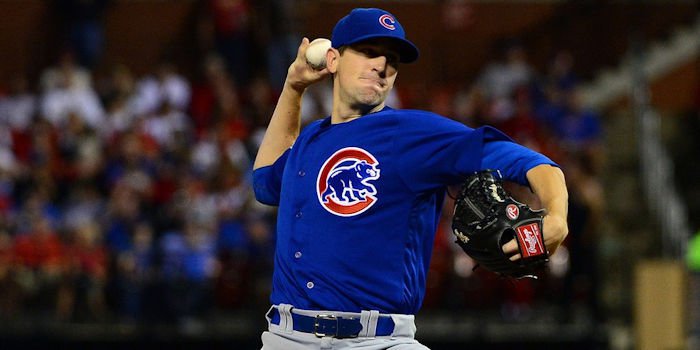 CINCINNATI -- Chicago Cubs starting pitcher Kyle Hendricks could very well be named as the National League Cy Young Award winner in the coming months because of the phenomenal 2016 regular season that he put together. But, in an unfitting final start for the Cubs ace on Sunday, Hendricks struggled in the regular season finale, giving up four runs in five innings on the hill. However, Hendricks was bailed out by the late-inning offensive heroics of the Cub hitters, as a four-run ninth inning propelled Chicago to a 7-4 victory against the Cincinnati Reds.

Hendricks struggled mightily in the opening inning, allowing three runs to score. The right-hander got two of the first three batters whom he faced out, but he proceeded to come undone. During the course of the bottom of the first, Hendricks hit a batter to load the bases and, then, walked in the game’s first run. In the next at-bat, Reds catcher Tucker Barnhart drove in two runs with a single to right, putting Cincinnati up 3-0.

The Chicago batters did not make Hendricks’s job any easier in the early innings, wasting two golden scoring opportunities. In the top of the first, Cubs shortstop Addison Russell, who went hitless in today’s game, grounded into an inning-ending double play with the bases loaded, and in the top of the second, Cubs right fielder Jason Heyward led off with a double but was left stranded at second.

The top of the third inning went far more favorably for the Cubs, though, with the North Siders bringing home a run to cut their deficit to 3-1. Center fielder Dexter Fowler was walked to begin the inning, and he used an advantageous jump to advance to third base on an ensuing single by third baseman Kris Bryant. As a result, the speedy Fowler was able to reach home safely on first baseman Anthony Rizzo’s groundout to second that followed.

Reds starting pitcher Robert Stephenson struggled with his command throughout his four innings on the bump, as he walked five. In the top of the fourth, Stephenson walked the first two batters, and Cubs left fielder Willson Contreras, who was 2-4 with two RBI on Sunday, singled to left and brought home the lead runner, Heyward, thus making the score 3-2.

The Reds neutralized Contreras’s RBI single in the bottom half of the fourth, with Barnhart scoring by way of a double to deep center off the bat of Reds right fielder Tony Renda. With his team losing 4-2 at that point, Cubs manager Joe Maddon opted to make a plethora of lineup changes in the fifth inning. Surprisingly, the second unit fared far better than the first unit at the plate and led the Cubs to a comeback victory.

Contreras hit the 12th home run of his stellar rookie campaign in the eighth, a solo shot to center, pulling the Cubs to within one, and a four-run ninth provided the North Siders with their first lead of the game, one that they would not relinquish.

Reds reliever Raisel Iglesias entered the action with a save opportunity on the table, but he floundered mightily. The situation looked propitious for the second-year pitcher from the start, as Iglesias collected two quick outs. In spite of that, Iglesias fell apart thereafter, getting shellacked for four runs.

After a walk and a single by the Cubs, right fielder Matt Szczur, who has served as a late-game hero in a few other instances this season, put the Cubs on top with a two-run double to right. In the next at-bat, catcher Miguel Montero, who was pinch-hitting for the pitcher, smacked his eighth home run of the year over the wall in right field to put the Cubs up 7-4. Coincidentally enough, Montero hit the first home run of the 2016 regular season for the Cubs, and he also hit the last.

In the bottom of the ninth, Cubs reliever Carl Edwards, Jr., breezed through the batting order, going three up, three down to lock up the Cubs’ come-from-behind 7-4 win over the Reds (68-94), their second triumph of the three-game series. The Cubs finished the season as MLB's outright top team at 103-58 overall, marking 2016 as the franchise’s first season with at least 103 wins since 1910. Hendricks collected a no decision on Sunday, leaving him at 16-8 overall. Despite his woeful start this afternoon, Hendricks finished with a 2.13 ERA, the best in the majors. Chicago relief pitcher Justin Grimm garnered the win on the evening, moving him to 2-1, and Edwards earned the second save of his young career. The Cubs will now transition into playoff mode and are slated to begin their postseason journey in Game 1 of the NLDS on Friday.