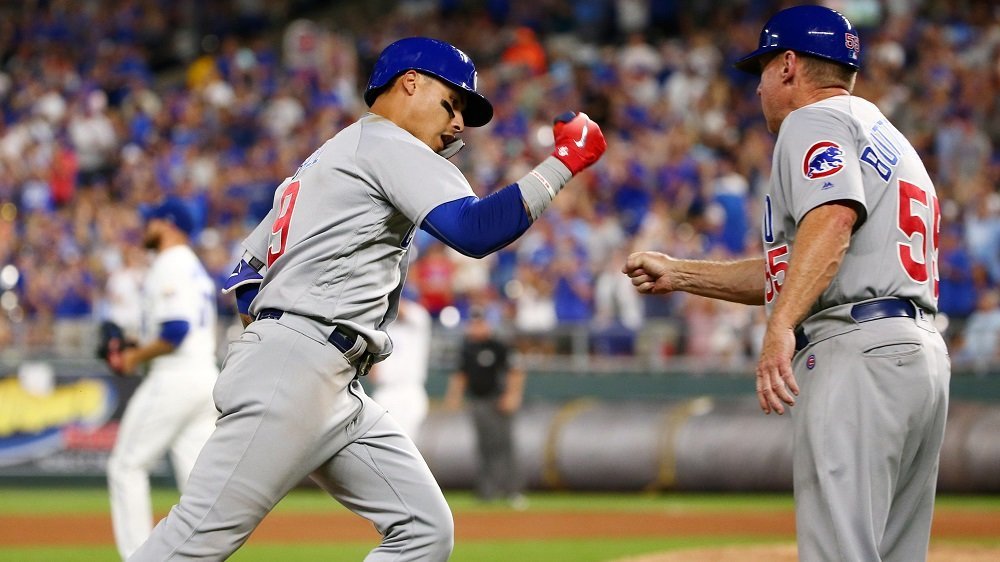 KANSAS CITY — Leading the charge for the Chicago Cubs, sensational infielder Javier Baez drove in two pivotal runs, including the winning run, in the Cubs' victory on the road against the Kansas City Royals on Monday night. Taking game one of a three-game interleague series, the Cubs scored three unanswered runs after falling down 1-0 in the second frame. Baez went 2-4 at the plate and increased his season RBI total to 88, which leads the National League.

The Royals experienced most of their offensive success early. They took a 1-0 lead in the bottom of the second on a two-out single by Alcides Escobar that scored Rosell Herrera. That served as the lone run allowed by Cubs starting pitcher Cole Hamels, who made just his second appearance in a Cubs uniform. Hamels tossed six innings and gave up seven hits and one walk en route to moving to 2-0 with Chicago.

Former Royal Ben Zobrist, who started at second base on the night for the Cubs, sparked Chicago in his return to Kauffman Stadium. Zobrist, who received an ovation from the crowd when he stepped up to the plate for his first at-bat, led off the fourth with a triple to right that was somewhat misplayed by Herrera. Later in the inning, a wild pitch from Royals starter Jakob Junis scored Zobrist to make the game 1-1.

Soon after Zobrist scored, a squall rolled through Kansas City and forced a 20-minute rain delay. The Cubs effectively controlled the ballgame following the weather delay. The fifth inning saw both clubs blow decent bases-loaded scoring opportunities. Junis exited after the fifth frame having struck out eight and given up five hits.

Junis's departure paid immediate dividends for the Cubs, as the first pitch thrown by Royals reliever Kevin McCarthy in the top of the sixth was hit out of the park by Baez. Skying a 414-foot solo bomb to center field, Baez tabbed his 25th home run of the year, which led to McCarthy falling to 4-4 with the loss. Baez increased the Cubs' lead in the eighth with an RBI double off former Cubs and current Royals pitcher Jason Hammel. The two-bagger to right scored Jason Heyward and put the Cubs up 3-1.

Every homer @javy23baez hits from here on out is a new career high.

Baez also made an impact on the defensive end. Manning third base, Baez pulled off a Gold Glove-caliber play in the second inning when he made a diving stop of a screamer hit down the third-base line. Preventing an extra-base hit, Baez gunned a throw across the diamond for an out to finish off his outstanding web gem.

How many gold gloves are you allowed to win in a single season? pic.twitter.com/BAOc3W34j2

Cubs reliever Pedro Strop took care of business in the ninth by going three up, three down for his eighth save, and the Cubs (65-47) defeated the Royals (34-78) 3-1. The offensive statistics were fairly even for both clubs, with the Cubs tallying nine hits and the Royals tallying eight hits, but Baez's clutch performance proved to be too much for the last-place Royals to handle.