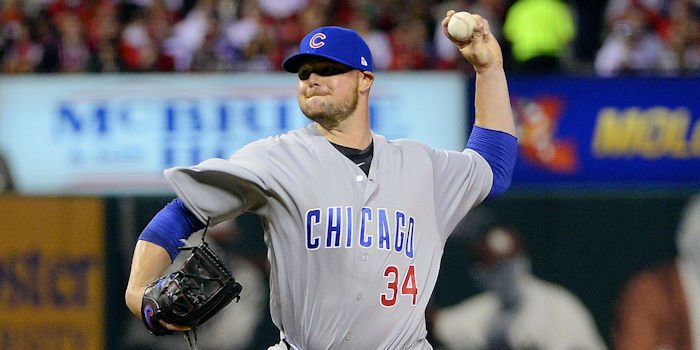 Cubs ace Jon Lester was taken to task in the sixth inning, and it ultimately ruined his otherwise solid start.

PHOENIX – It only took one scoring outburst for the Arizona Diamondbacks to defeat the Chicago Cubs on Saturday. Thanks to a four-run sixth inning, the D-backs took care of business at home against the Cubs, coming out on top by a final score of 6-2 in a contest that featured little offense early on but quite a lot of offensive fireworks later on. Overcoming 11 strikeouts, the Diamondbacks made the most of their opportunities on Saturday, something that cannot be said about the Cubs.

Each team had opportunities to score in the opening inning, with a runner advancing into scoring position for both the Cubs and the Diamondbacks. However, neither club capitalized off of those opportunities, thus setting the tone for the uneventful innings that were to come.

Not a run was scored in the first five and a half innings of Saturday's clash, as the starting pitchers were dominant during that stretch. In a battle of left-handers, Jon Lester of the Cubs and Patrick Corbin of the D-backs went tit for tat until the aforementioned bottom of the sixth, with the two aces breezing through the batting order. Third baseman Kris Bryant was the lone Cub to experience any conspicuous success against Corbin, with the reigning MVP singling and doubling off of him.

The only occasion in which Chicago had a legitimate chance of scoring, however, came in the top of the fifth, as second baseman Javier Baez, who went 2-3 on the night, and catcher Alex Avila singled to begin the frame and were then advanced to second and third on a sacrifice bunt by Lester. However, Baez attempted to score on an ensuing grounder to short and assuredly regretted doing so thereafter, as he was thrown out at the plate by Arizona shorstop Ketel Marte.

After coming up empty-handed in the fifth, the Cubs would never recover, with the North Siders accruing only one additional hit prior to a meaningless two-run ninth. The Diamondbacks, on the other hand, came alive late in the game, with the team pouring on four runs in the sixth and never looking back. With runners on first and second and one out in the bottom of the sixth, Lester, whose pitch count was rather high, probably should have been relieved on the hill. But Cubs manager Joe Maddon left him in the game, and it cost the Cubbies.

With one of two hits for the outfielder on the night, Arizona's J.D. Martinez cranked a double to deep right in the sixth, which brought in a run and enabled Marte's proceeding groundout to add another run to the board. Capping off the three-hit, four-run frame on a high note for Arizona, second baseman Brandon Drury batted the second double of the inning, scoring two runs on a hit to deep center.

Lester was forced to play out the miserable sixth inning, which was his final inning, only seeing it end after being taken for four runs. Giving up seven hits while striking out nine, Lester endured a largely successful start that was marred by one lackluster inning. One of the contributing factors behind Lester's losing start, which saw the lefty's record drop to 8-7, was Arizona left fielder David Peralta, who was a force to be reckoned with all game long. Going 3-5 and scoring two runs, Peralta served as the leadoff hitter for the D-backs on Saturday and was clearly up for the task.

Peralta practically single-handedly put the game out of reach for the Cubs, scoring two runs late in the matchup to give Arizona a commanding 6-0 advantage. First, Peralta led off the seventh with a double toward the wall in right, later coming home on an RBI single from center fielder A.J. Pollock. Then, in the eighth, Peralta used his trademark speed to accrue an inside-the-park home run on a well-hit ball to deep center.

The Cubs collected a pair of runs in the ninth on a two-run single by Bryant, which gave him 51 RBI on the year, but, because of Peralta's late-inning magic, the gap was too sizable for Chicago to overcome. Falling 6-2, the Cubs moved to 60-55 overall and also fell into a first-place tie with the St. Louis Cardinals atop the National League Central, marking the first time in quite a while that the North Siders are not alone in that position. Chicago will look to bounce back in the rubber match of its three-game road series versus the Diamondbacks tomorrow, with first pitch slated for 2:10 PM MST at Chase Field.