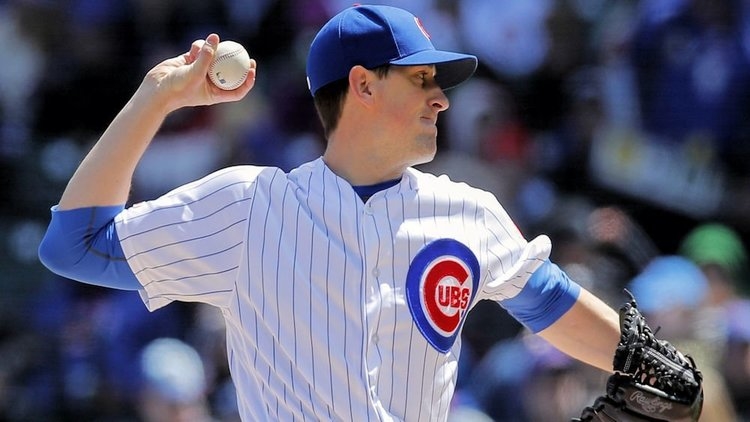 CHICAGO, Ill. — After struggling to consistently hold opponents to under five runs per game in the early goings of the 2019 season, the Chicago Cubs (9-9) have flipped the script in their current 4-game winning streak. On a windy Friday afternoon at Wrigley Field, the Cubs nearly shut out the Arizona Diamondbacks (10-10). The 5-1 Cubs victory kicked off the 3-game series versus the D-backs at the Friendly Confines, with the nearly 20-mile-per-hour gales actually working in the Cubs' favor at one point. Arizona avoided getting blanked by pushing a run across in the ninth, ending a 31-inning shutout streak for the North Siders, which served as their longest streak of not giving up any runs since 1976.

Cubs starting pitcher Kyle Hendricks collected his first win of the season with a commanding 7-inning outing that saw the right-hander strike out 11. Hendricks entered the contest with just 10 strikeouts to his name this season, and he topped that total over the course of his 100-pitch stint, which marked the third consecutive game with a Cubs starter pitching exactly seven shutout innings. At the dish, Kris Bryant and Willson Contreras both went 2-for-4 and were responsible for driving in a combined three of the Cubs' five runs on the day.

Bryant had the wind to thank for his shining moment of the matchup, as a routine pop fly hit by Bryant in the bottom of the second turned into a 2-run double because of the breeze. Coming with two outs and the bases loaded, the high popup changed its trajectory due the effect of the intense winds and fell safely between four different Arizona defenders. Scored as a double, the 2-bagger put the Cubs ahead 2-0.

In the fourth, Cubs first baseman Anthony Rizzo slapped a triple into the left-field corner that ricocheted off the brick wall in foul territory. Second baseman Daniel Descalso came home on the play to provide Chicago with a 3-run edge.

Diamondbacks reliever Matt Koch struggled in the sixth and gave up two additional runs to the Cubs. Koch hit Rizzo in the foot with a pitch early in the inning and went on to allow Bryant to score from third on a wild pitch. He then allowed shortstop Javier Baez to score on an RBI single by Contreras.

Cubs reliever Brad Brach saw the shutout streak end on his watch when he gave up an RBI double to Ketel Marte in the ninth. Brach was bailed out by Pedro Strop, who entered the game with runners on second and third and one out and collected two quick outs to end the game. With the 5-1 triumph, the Cubs increased their winning streak to four games, as yet another quality start on the mound paid off for the North Siders. Over the course of Chicago's last seven games, Cubs starting pitchers have an ERA of 0.96. As a result, the Cubs now boast a .500 or better record for the first time since March.