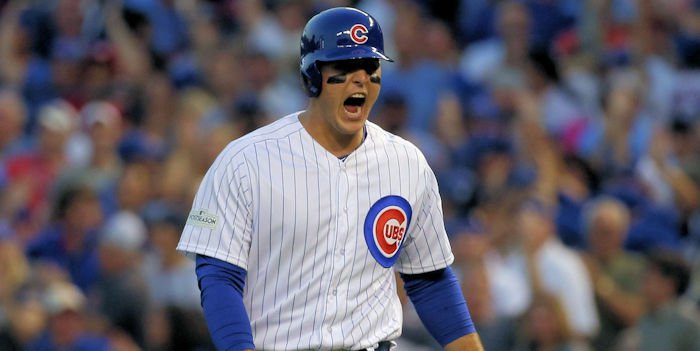 Like he has done all season long, Anthony Rizzo produced when it mattered most. (Credit: Jerry Lai-USA TODAY Sports)

CHICAGO — In Game 3 of the NLDS series between the Washington Nationals and the Chicago Cubs, both teams sported solid starting pitching but were inept, for the most part, at the plate. As for the Nationals, they wasted a spectacular start by ace Max Scherzer that saw him pitch 6.1 innings of no-hit ball and overcome a glaring lack of hitting support. As for the Cubs, defense was the issue. While it would be reasonable to expect errors to not play a major part in the all-important postseason, the Cubs were miserable on defense, committing four errors and not making starter Jose Quintana's job any easier.

Although the quality of play was not exactly top-notch, both teams came alive at the plate late in the contest when it mattered most, with each club scoring runs in the waning stage of the matchup. With just four hits on the night, one more than that of the Nationals, the Cubs made the most of their scoring chances, overcoming their defensive struggles and earning a hard-fought 2-1 victory at Wrigley Field that appropriately put them ahead 2-1 in the best-of-five series.

Scherzer, who is likely to receive his second consecutive Cy Young Award next month, pitched lights out early on, with his lone jam coming via an error, the only one of the game suffered by the Nats. An errant throw on a double-play attempt from shortstop Trea Turner placed a runner into scoring position for the Cubs, but nothing came of it.

Though he walked three and hit a batter, thus creating the aforementioned double-play opportunity in the fourth, Scherzer was practically flawless prior to the sixth inning. With seven strikeouts on the day, Scherzer was in a zone, but at the first sign of trouble, he was pulled by Nationals manager Dusty Baker.

After allowing his first hit of the afternoon on a double by second baseman Ben Zobrist with one out in the seventh, Scherzer, who had thrown 98 pitches at that point, was yanked in favor of Washington reliever Sammy Solis, a decision that proved costly for the Nationals.

On the hill for the Cubs was lefty Jose Quintana, who made his playoff debut. Giving up just two hits and one walk, Quintana, who struck out seven, was solid in his first career postseason appearance, throwing 5.2 innings of one-run ball. If not for a horribly-botched play by Kyle Schwarber in left field, Quintana's start might have lasted longer, but, like Scherzer, he was pulled following the first sign of trouble.

With two outs and the score standing at 0-0, the Cubs were a mere fly-ball out away from advancing to the bottom of the sixth with the game remaining scoreless. However, Schwarber ruined that chance, as he dropped a fly ball hit by Nationals second baseman Daniel Murphy and proceeded to bobble it once he attempted to pick it up and throw it toward the infield. Therefore, Murphy reached second base on a play that resulted in two errors being charged to Schwarber.

Having already suffered from two errors prior to the sixth, the Cubs accrued four errors in total, putting a bow on an embarrassing defensive display in arguably the most important game of their season up to this point. And the Nats made sure to take advantage of the misplay from Schwarber, as first baseman Ryan Zimmerman, who hit the winning home run in Game 2, put the Nationals on the board with an RBI double off of Cubs reliever Pedro Strop not long after Quintana exited the game.

The Cubs were able to even the score in the seventh under similar circumstances, as they took advantage of a departure by the opposing starting pitcher, as well. Solis, who had struggled earlier in the series, was woeful on Monday, as he allowed an RBI single off the bat of outfielder Albert Almora, Jr., and then gave up a single to outfielder Jason Heyward.

Washington reliever Brandon Kintzler was then able to enter the game and salvage the situation, earning a quick double play, but the Nats were not so lucky in the eighth. After Kintzler walked pinch hitter Tommy La Stella, center fielder Jon Jay laid down a sacrifice bunt that moved Leonys Martin, who pinch ran for La Stella, into scoring position.

Thereafter, Nationals reliever Oliver Perez entered the game and was unable to escape the jam, giving up an RBI single to first baseman Anthony Rizzo. A hit to shallow center, the single from Rizzo put the Cubs on top, and although Rizzo was thrown out at second while attempting to stretch it into double, the Cubs garnered the win on Rizzo's fifth RBI of the series nonetheless.

Cubs closer Wade Davis dominated the Nationals' batting order in the ninth, quickly going three up, three down to secure the 2-1 victory and earn his second save of the series. Cubs reliever Carl Edwards, Jr., on the other hand, earned a win after a three up, three down performance in the eighth inning, thus redeeming himself from his underwhelming outing on Saturday.

Even though they committed four errors in a postseason game for the first time since 2008, the Chicago Cubs avoided disaster, thanks in large part to a relentless approach at the plate late in the game. Chicago will have the chance to take the series tomorrow afternoon, with Game 4 at Wrigley Field starting up at 4:38 PM CST.

All eyes will be on Cubs starter Jake Arrieta on Tuesday, as the fireballer, who has struggled with an injury as of late, is set to do battle with Tanner Roark of the Washington Nationals in what is a must-win game for the team from the nation's capital.